Cannabis in 2017: Setting the stage for legalization

A groundbreaking shift in policy in 2017 set the stage for the legalization of cannabis for recreational use in Canada, which the Canadian government indicates will occur no later than July 1, 2018. In preparing for the launch of this new market, businesses face a fluid and changing legal environment. The players are ready to take the field but all the rules of the game are not yet known. The businesses that will be in the best position to be successful will be those that fully understand the proposed regime and that anticipate and adjust to the legislative requirements as they are introduced.

The new Cannabis Act will change the current landscape

While medical cannabis is currently legal in Canada, recreational cannabis is not. In 2017, after years of campaign promises, public consultations, debate and reports, the Government of Canada introduced Bill C-45, An Act respecting cannabis and to amend the Controlled Drugs and Substances Act, the Criminal Code and other Acts (the Cannabis Act). If enacted, the Cannabis Act will dramatically change the current legal landscape. It will create a strict legal framework for controlling the production, distribution, sale and possession of cannabis for recreational and medical use in Canada. The underlying philosophy of the Cannabis Act is to protect youth, ensure public health and safety, deter criminal activity and reduce the burden on the criminal justice system in relation to cannabis.

No producer involved in the illicit or so-called “grey” market will be entitled to obtain a licence under the Cannabis Act. In addition, if Health Canada believes that a licensed producer has been involved in the illegal market their licence could be revoked. For a more detailed look at the Cannabis Act provisions, including criminal offences, administrative penalties, seizure powers and the licensing regime, please see our Osler Update entitled On the road to legalization: Highlights of Canada’s proposed Cannabis Act.

The federal government has set July 1, 2018 as the target date to provide regulated and restricted access to cannabis for recreational use. However, as of December 1, 2017, the Cannabis Act remains subject to parliamentary approval and royal assent.

Provinces: the ball is in your court!

As a result of shared constitutional power over issues affecting the legalization of cannabis, the Cannabis Act leaves much discretion for the provinces to decide on how to implement the new law. There is no requirement for the provinces to adopt a uniform regime. Early indications are that there may be significant differences in regulation from province to province, creating further fluidity and uncertainty for businesses seeking to enter this new market.

If a province has not adopted its own legislative regime for the sale and distribution of cannabis by July 1, 2018, cannabis will be available to users under the federal regime through online ordering and secure mail delivery.

As of December 1, 2017, Alberta, Ontario and Québec have published proposed legislation for the retail sale and use of recreational cannabis. Alberta’s Bill 26, An Act to Regulate and Control Cannabis, Ontario’s Bill 174 the Cannabis, Smoke-Free Ontario and Road Safety Statute Law Amendment Act, 2017 and Québec’s Bill 157, An Act to constitute the Société québécoise du cannabis, to enact the Cannabis Regulation Act and to amend various highway safety-related provisions will regulate the use and sale of recreational cannabis in Alberta, Ontario and Québec respectively. Other provinces, namely Manitoba, New Brunswick and Newfoundland, have also announced certain details on their proposed legislative frameworks for cannabis.

In Ontario, under Bill 174 the minimum age to purchase recreational cannabis is proposed to be 19 years, higher than the federal minimum of 18 years. Consumption will be limited to “private self-contained living quarters in any multi-unit building or facility.” Use will be prohibited in public places, workplaces, motor vehicles, boats and any other prescribed place.

In Alberta and Québec, the minimum age to purchase recreational cannabis is proposed to be 18 years. New Brunswick and Newfoundland and Labrador have set the minimum age to purchase recreational cannabis at 19 years. Consumption of cannabis will be allowed in private residences and, unlike Ontario, in Alberta, Québec, New Brunswick and Newfoundland, in some public areas where smoking of tobacco is permitted. In Québec, no one will be allowed to grow cannabis for personal use inside a dwelling.

Retail is one area where significant differences between the provincial regulations may arise that will almost certainly impact the way businesses can operate in this market.

Ontario, for example, has announced a wholly government-run system through a subsidiary of the Liquor Control Board of Ontario. Québec and New Brunswick will also follow a wholly government-run model. On the other hand, Alberta, Manitoba and Newfoundland will implement a hybrid approach involving government-run wholesaling and distribution and the private sector operation of licensed retail locations. In all jurisdictions that have announced details on their retail distribution system, online sales will be permitted; however, online sales and home delivery will be operated by the government. Other provinces have yet to announce the full details of their retail model.

One common element amongst the regimes so far is the separation of the sale of alcohol and cannabis (i.e.; no co-location). For further detail and analysis of Ontario’s model, please see our Osler Update entitled Ontario government announces exclusive cannabis retail distribution regime.

The retail model chosen by a province could significantly affect the manner in which producers can take advantage of this new market and may affect the ability of smaller producers to participate at all.

The retail model chosen by a province could significantly affect the manner in which producers can take advantage of this new market and may affect the ability of smaller producers to participate at all. Critics have argued that a government-exclusive retail distribution regime (such as is proposed in Ontario, Québec and New Brunswick) with a regulated, fixed pricing structure could “lock in” the dominance of Canada’s largest cannabis producers. This would effectively hinder the ability of smaller cannabis producers, including micro-cultivators and micro-processors, to differentiate their premium or “craft” products. Businesses will need to understand the different provincial rules in designing a model that will allow them to take advantage of this new market.

Although pricing may vary from province to province, there are early indications that the price per gram will likely be around $10.

Addressing taxation, Prime Minister Justin Trudeau recently announced a minimum $1 per gram tax (or 10% of the producer’s price, whichever is higher) after which retail sales levies would be applied. For example, one gram of dried cannabis costing $8 to produce would be taxed at $1 and then a sales tax of $1.17 would be added to bring the total consumer price to $10.17.

The Cannabis Act will restrict the promotion, packaging, labelling and display of cannabis in ways that are similar in some respects to the restrictions currently applicable to tobacco and alcohol. For example, informational promotion (i.e., factual information about cannabis or its characteristics) is permitted under certain circumstances (e.g., only where persons under the age of 18 years are not permitted by law). Facilities used for sports or cultural events will be prohibited from displaying, as part of their name or otherwise, a brand element of cannabis or the name of a person that produces, sells or distributes cannabis.

Cannabis will be prohibited from being promoted in a manner appealing to persons under the age of 18 years. The Consultation Paper proposes strict limits on the use of colours, graphics and other special characteristics of packaging to curtail the appeal of products to youth. Cannabis products will be required to be labelled with specific information about the product, contain mandatory rotating health warnings similar to tobacco products and be marked with a clearly recognizable standardized cannabis symbol. The health warning messages are to be the most prominently displayed elements. Health Canada is also considering establishing specific standards for the brand elements.

Some industry groups view these restrictions as too strict. The Coalition for Responsible Cannabis Branding (the Coalition), an alliance of 17 licensed cannabis producers, recently released proposed guidelines for the branding and marketing of cannabis. These industry-proposed guidelines would be looser than the restrictions currently proposed in the Consultation Paper but still stricter than the rules for advertising alcohol. The Coalition argues that this would enable effective promotion, branding and education, engaging consumers in such a way as to diminish the illicit market without impacting youth. 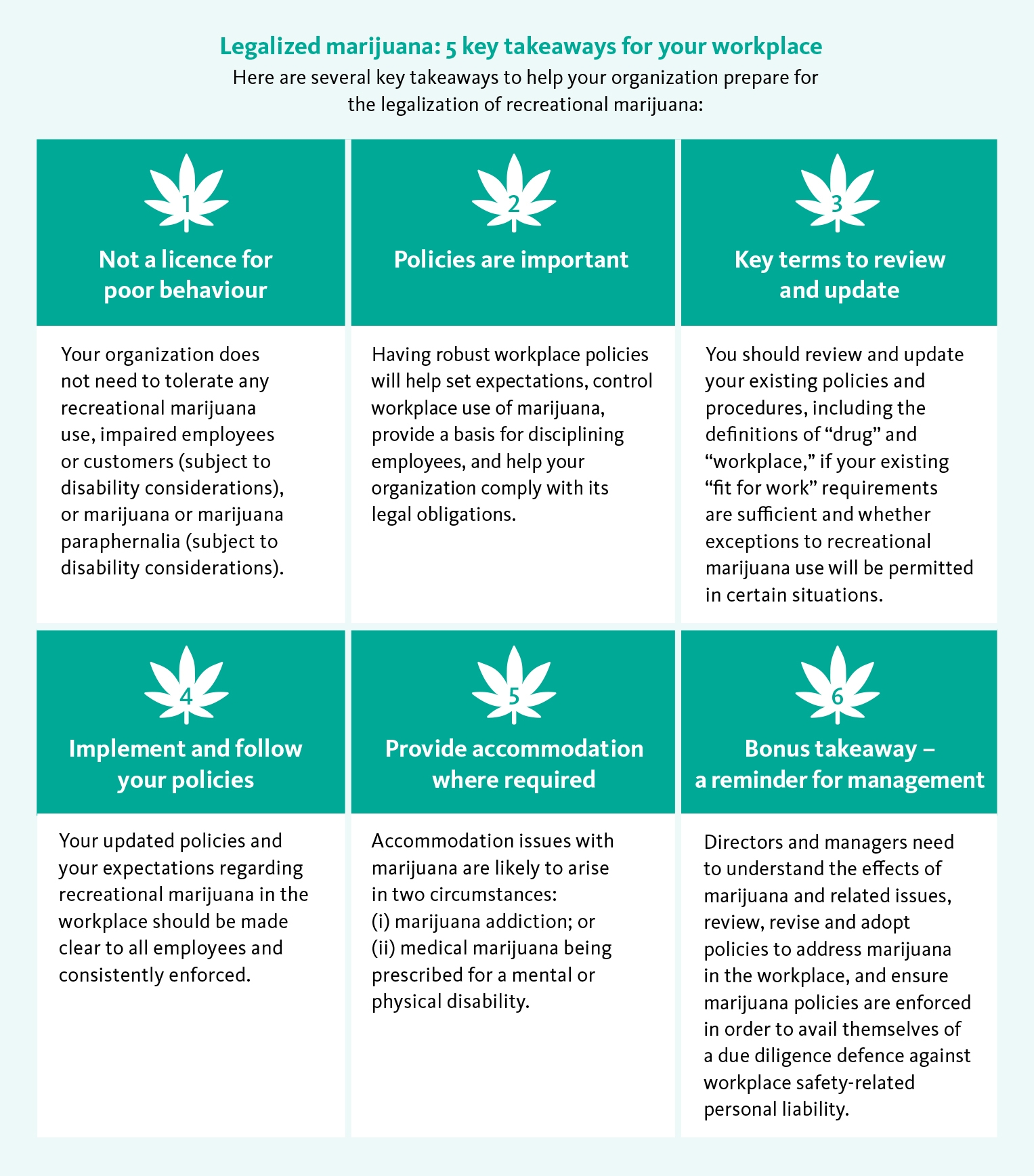 Participants in the cannabis market will also need to understand the international landscape in which they operate.

The import and export of cannabis will be heavily restricted. For example, the Cannabis Act provides that licences or permits for the importation or exportation of cannabis will only be issued for medical or scientific purposes or in respect of industrial hemp. Even in these situations, the Minister of Health will allow import only under limited circumstances – e.g., the import of a unique strain for scientific investigation or of starting materials for a new licensed producer.

A licensed producer wishing to apply for an import or export permit will also have to take into account Canada’s obligations under international treaties, compliance with the ACMPRs, importation restrictions in the destination country and security concerns. Importation or exportation of cannabis for recreational purposes will not be permitted under the Cannabis Act and recreational cannabis will effectively be a “grown in Canada” proposition.

Despite the legalization of marijuana for medical use in many states in the United States and the legalization for recreational use in eight states and the District of Columbia, the cultivation, distribution and possession of marijuana remains illegal under United States federal law. The conflict between state and federal law means that issuers with marijuana-related activities in the United States assume certain risks, including the risk of prosecution or seizure of assets.

To address this risk, the Canadian Securities Administrators (the CSA) has released “CSA Staff Notice 51-352 Issuers with U.S. Marijuana-Related Activities,” which outlines specific disclosure expectations for all issuers with (or that will have) marijuana-related activity in the United States. The issuer is expected to disclose the nature of its involvement in the United States marijuana industry in prospectus filings as well as continuous disclosure documents, such as the issuer’s annual information form and management’s discussion and analysis.

The Toronto Stock Exchange (TSX) has also stated that it will launch a review of listed companies engaged in the marijuana business, whether directly or indirectly, in the United States. The TSX will be undertaking “in-depth” reviews of all applicants and listed issuers in the marijuana sector. Issuers may be the subject of delisting review in the event of gaps in compliance or failure to comply with TSX listing requirements. For example, Canadian grower Aphria Inc. has assets in Arizona and Florida (both states permit the use of cannabis for medical use) and is listed on the TSX. Aphria Inc. could be forced to choose between its TSX listing or its presence in the U.S. cannabis industry. Whether Aphria and TSX can come to terms will be an important development to watch for in 2018.

Further detail regarding which issuers will be impacted and listing requirements is available in our Osler Update entitled CSA, TSX release guidance regarding marijuana-related activities in the United States for issuers of securities.

In 2017, a significant shift in policy was introduced that proposes to legalize cannabis for recreational use. Moving forward, businesses engaged in the industry will face an uncertain and challenging legal atmosphere but one that also presents significant opportunity. In order to be successful, businesses will need to fully understand the proposed regime and legislative requirements, as well as stay informed of continuing developments in 2018. Key items to watch for include the finalization of the federal regulations, provincial progress (particularly with respect to retail regimes, pricing and promotion) and the TSX approach to dealing with cannabis industry listed companies.