In a market with soaring multiples, private equity buyers are increasingly on the hunt to mitigate high valuations by acquiring platform companies from which they can pursue add-ons at materially lower multiples and with the potential for synergies. And given the current seller-friendly market, sellers are increasingly seeking to receive premiums for platform companies with add-on potential. In this article, we summarize the complexities that often arise in addressing the potential or pending acquisition of an add-on target (the "Add-On") in a definitive acquisition agreement for a target platform company (the "Target") and the principal methods used by buyers and sellers in recent transactions to address such complexities.

(a) Purchase Price. The table below describes some of the issues that thoughtful buyers and sellers will need to work through in situations where a Target has one or more Add-On acquisitions in the pipeline. We note that there are plenty of examples of purchase agreements that don't contemplate these mechanics even where a Target has signed up an Add-On prior to going out to potential buyers, and generally that leads to a very buyer-friendly result (consider quickly the example where an Add-On closes prior to the Target closing, with the buyer simply paying less cash to the Target as a result of the net debt that it has assumed to acquire the Add-On). And conversely, there are plenty of purchase agreements that simply build an assumption into the purchase agreement that the buyer is paying for the EBITDA associated with the Add-On, which could lead to a very seller-friendly result (consider what happens if the deal never closes). And even with some of the details below, there are myriad other mathematical complexities that will come up in the nuanced drafting that these situations require. 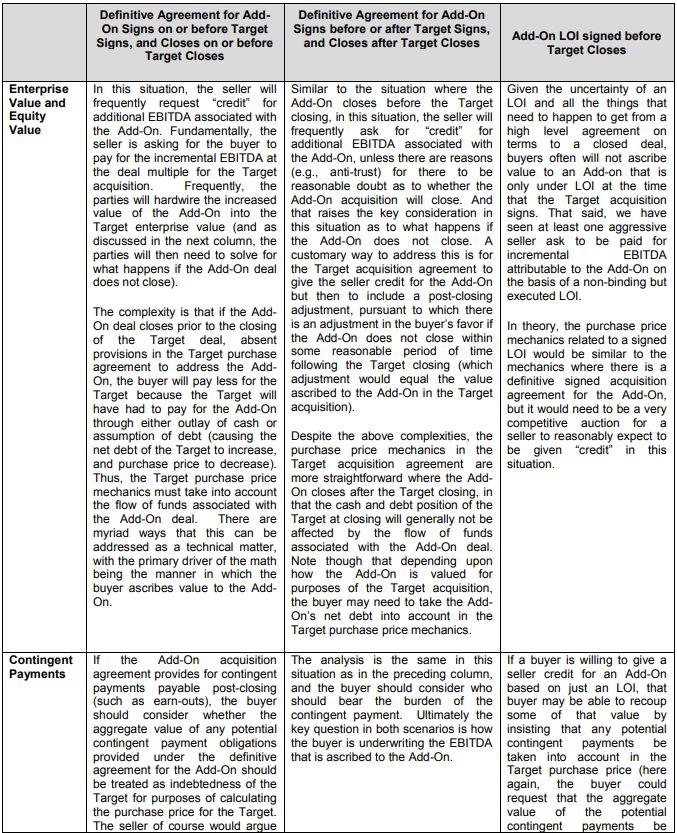 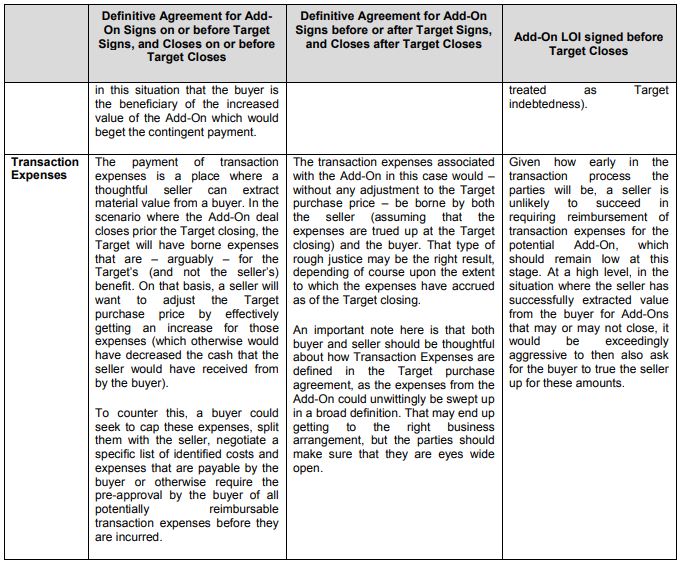 (b) Timing. There are other timing considerations beyond just the purchase price mechanics. For example, the buyer may seek to make the Add-On acquisition a condition to closing the Target acquisition if the Add-On is deemed valuable enough to the buyer and fundamental to its investment in the Target, or if the buyer has agreed to pay a significant premium for the Target as a result of the potential Add-On acquisition. Whether the seller is willing to agree to this conditionality, however, will depend on the buyer's leverage and how quickly the Add-On closing is expected to occur and the level of certainty the seller has with respect to the Add-On closing actually occurring. In some cases the buyer will have leverage to the extent that the seller would need incremental financing to close the Add-On (which may counteract the lack of leverage a buyer will generally have in an auction process). And so depending again on leverage and the context of the acquisition, a better option may be for the buyer and the seller to agree that the pursuit of the Add-On will be suspended until after the Target closing, leaving the Add-On acquisition entirely in the hands of the buyer. If time permits, this route can avoid wasting time and resources in negotiating some of the complexities discussed above and provide greater certainty with respect to the Target closing.

In summary, if a buyer is agreeing to pay more for a Target due to a potential Add-On, there are myriad complexities and there is no "market". A buyer's ability to negotiate against the seller's demands will ultimately depend on its leverage (e.g., whether they are in a robust auction or a proprietary situation) and also how far down the road the seller is with respect to Add-On. And here as ever, the most important thing for a buyer is to be aware of these complexities (and to work with thoughtful advisors to confront those complexities).