If January's minimum wage, tip, and overtime developments forecast what employers should expect throughout the remainder of the year, it could be a challenging 2020.

U.S. DOL Passes the Joint (Employer Rule): On January 16, 2020, the U.S. Department of Labor (DOL) released its long-awaited final rule regarding joint-employer status under the federal Fair Labor Standards Act (FLSA), which will become effective March 16, 2020. The rule creates a four-factor balancing test that examines whether the putative joint employer: 1) Hires or fires the employee; 2) Supervises and controls the employee’s work schedule or conditions of employment to a substantial degree; 3) Determines the employee’s rate and method of payment; and 4) Maintains the employee’s employment records.

DOL, an Agency of Letters: The U.S. Department of Labor continues its opinion letter writing streak. One new opinion letter addresses calculating overtime pay for a non-discretionary lump sum bonus an employer pays at the end of a multi-week training period. Another opinion letter addresses whether per-project payments satisfy the salary basis test for the executive, administrative, and professional exemptions. While the FLSA overtime letter provides a straightforward answer, employers might temper the broad sweep of the FLSA salary basis letter with a caveat or two.

Coast-to-Coast Coverage of State Legislative & Regulatory Developments: After reading about everything that happened in January, and what January developments may signal for the rest of 2020, some employers may toast to "dry January" ending.

Colorado's Department of Labor and Employment finalized Colorado Overtime and Minimum Pay Standards (COMPS) Order #36, which significantly broadens coverage under, and revises, wage and hour rules, beginning March 16, 2020. Previously, four industries were subject to the rules: 1) Retail and service; 2) Commercial support service; 3) Food and beverage; and 4) Health and medical. As amended, the order applies to all industries unless an exemption applies.

Among the more notable changes are pay standards for exempt executive, administrative, and professional employees (including computer employees). From March 16 through June 30, 2020, employers must pay executive, administrative, and professional employees a salary that is at least the minimum wage for all hours in a workweek. In addition to this general rule for salaries, beginning July 1, 2020, the following minimum salary amounts apply (which can exceed the FLSA rate in 2020, and will exceed it in future years): 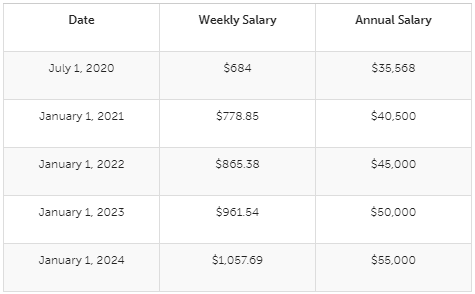 The order allows exempt computer employees to be on a salary or hourly basis. For hourly computer employees, the rate must be at least $27.63 per hour. In 2021 and each subsequent year, the state will adjust the rate based on consumer price index changes. Additionally, the revised rule contains duties requirements that mirror, but are not identical to, FLSA standards, e.g., employees must have the type of advanced knowledge customarily acquired by a prolonged course of specialized formal or informal study, and must spend at least 50% of a workweek performing exempt duties.Beginning January 1, 2025, and each subsequent January, the state will adjust the salary amount floor based on consumer price index changes.

The above changes represent a small percentage of revisions the state labor department makes. We recommend employers with Colorado operations consult employment counsel about the above (and other) amendments to ensure their policies and procedures will comply when the changes take effect in a month and a half.

Connecticut Governor Ned Lamont (D) signed HB 7501, which requires the state labor department, by April 1, 2020, to propose new rules concerning tip-credit employees who perform both service and nonservice duties. Notably, the bill requires the rules to align with the 20% rule concerning tip-credit employees performing non-tipped duties that the U.S. Department of Labor plans to eliminate. The bill also requires the department, no later than 30 days after finalizing the rules, to conduct random wage and hour audits of tipped workers in no fewer than 75 restaurants and prepare a report on their compliance with the new rule. Additionally, within one year of the final rule, the department must report to the state legislature. 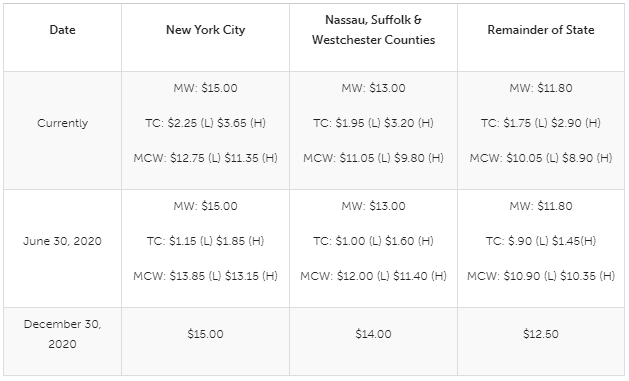 NYSDOL published the proposal on January 22, 2020, and will accept public comments for 60 days.

Also, a late addition. On December 23, 2019, the New Jersey Department of Labor and Workforce Development published proposed revisions to its wage and hour rules in response to 2019 minimum wage amendments. Among the proposed changes is a proposal to adopt a 20% rule concerning tip credit employees performing non-tipped duties. As noted above, this is the standard the U.S. Department of Labor proposes eliminating. A good chunk of the proposed rules concerns tipped employees. The Department will hold a public hearing on February 26; the public comment deadline is April 3, 2020.

Because Pennsylvania legislators did not agree on an increase to the minimum wage, tipped and exempt employee pay levels before the deadline the governor set, the state labor department's proposed salary increases for exempt executive, administrative, and professional employees were back before, and approved by, the Pennsylvania Independent Regulatory Review Commission on January 31, 2020. Under the proposal, the salary threshold will increase to $684 per week / $35,568 annually when the rules take effect (i.e., the FLSA rate), $780 per week / $40,560 annually on January 1, 2021, and $875 per week / $45,500 annually on January 1, 2022. In 2023 and every subsequent three years, the rate will be an amount equal to the 10th percentile of all Pennsylvania workers who work in such exempt jobs. Additionally, the proposal includes changes to required duties these employees must perform. Notwithstanding that legislators did not reach a compromise by the governor's deadline, they may be able to impede the rule change's eventual effective date via the legislative process. Alternatively, if legislators can achieve compromise, the governor could direct the department to rescind the rules.

Other State Legislative Updates: A joint committee of both legislative houses is reviewing Vermont SB 23, which proposes to increase the minimum wage from $10.96 to $11.75 and $12.55 per hour on January 1, 2021 and 2022, respectively (and then revert to annual consumer price index adjustments in 2023). Additionally, the bill mandates a written report on altering or eliminating the tip credit for tipped employees and the subminimum wage for secondary school students.

Common at the beginning of each legislative session is a tidal wave of minimum wage, tip, and/or overtime bills. Because this month we are raining down content on our readers, we briefly summarize new bills.

Ballot Boxing: The Ohio Attorney General certified for the November election the Raise the Wage Ohio Amendment. The measure proposes to amend the state constitution to increase the minimum wage from to $9.60 per hour on January 1, 2021, annually increase the rate in equal amounts (i.e., 85 cents per hour) per year until it reaches $13.00 per hour on January 1, 2025, and then annually adjust the rate based on consumer price index changes.

Local Matters: In Flagstaff, Arizona, the city council discussed a forthcoming survey concerning its minimum wage ordinance. Separately, residents reported receiving calls asking their thoughts about the ordinance, which did not appear to be the city-sanctioned survey.

In Northern California's San Francisco Bay Area, the San Carlos City Council continued its hearing concerning a proposed minimum wage ordinance because it did not receive a requested opinion before the meeting. However, the Half Moon Bay City Council did hold a hearing on its proposal, amending the measure to delay the first day the $15.00 per minimum wage could apply from July 1, 2020 to January 1, 2021, and will hold a second reading the first week of February.

Ending years of litigation, the Minnesota Supreme Court held state law did not preempt the Minneapolis Minimum Wage Ordinance. In a footnote, the court noted the challengers also previously unsuccessfully argued that the ordinance should not apply to employers located outside Minneapolis that send workers into the city, but did not appeal the lower court's ruling. Accordingly, the law is valid and applies to Minneapolis and non-Minneapolis employers with covered employees performing work in the city. In the other twin city, Saint Paul released rules and FAQ implementing its minimum wage ordinance, which took effect on January 1, 2020. The rules clarify numerous issues, including specific records employers must keep and factors the enforcement agency will consider to determine whether a worker is an employee or an independent contractor.

In Philadelphia, Pennsylvania, City Council Files 200042 & 200008 propose to create a local labor department to investigate and enforce the city's worker-protection laws, and a board to review its determinations, and File 200049 proposes to allow the Committee on Labor and Civil Service to hold hearings on workplace misclassification.

A memo by the deputy city manager of Bainbridge Island, Washington includes a list of potential future topics the city council could address, which includes a $15.00 per hour minimum wage.

Yes, This Article Has Been Taxing. Sorry, we cannot offer you anything for reading this far, other than information about states offering minimum-wage-related tax relief. A press release by New Jersey Governor Phil Murphy (D) reminds New Jersey employers about a $10 million tax credit program for the 2019 tax year to help offset payroll cost increases for employers of workers with impairments, who can claim credit for the cost of the minimum wage increase and corresponding payroll tax increase. Similarly, a press release from the Illinois Department of Revenue reminds small businesses that, starting January 1, 2020, they can use the minimum wage credit to offset state minimum wage increases.