The year ahead for directors: what's in store for 2020?

In our 2019 article "The year ahead for directors: what's in store for 2019", we discussed some of the Federal Government's proposed changes to the Corporations Act 2001 (Cth) (Corporations Act) which had the potential to impact company directors. A number of the proposed amendments have just been implemented over one year on from their introduction into Parliament (the delay predominantly relates to the dissolution of Parliament for the 2019 Federal election). We outline some of the key proposals and how they will impact directors below.

In December 2019, the Treasury Laws Amendment (Registries Modernisation and Other Measures) Bill 2019 (Cth) (Registries Modernisation Bill) was reintroduced in the House of Representatives to replace its predecessor which lapsed in April 2019. The Registries Modernisation Bill proposes the introduction of new Director Identification Numbers (DINs) for registered directors. Under the proposed regime, any person appointed as a director of a corporation must apply for a DIN prior to their appointment. A DIN is a unique numerical identifier attributed to each director in perpetuity, which according to the Explanatory Memorandum, will "provide traceability of a director’s relationships across companies, enabling better tracking of directors of failed companies and will prevent the use of fictitious identities."

The most notable change contained in the new version of the Registries Modernisation Bill is the requirement for directors to apply for a DIN prior to their appointment. In the previous version, directors were given 28 days following their appointment to apply.

The following table is an updated summary of the maximum penalties for breach of the proposed DIN regime: 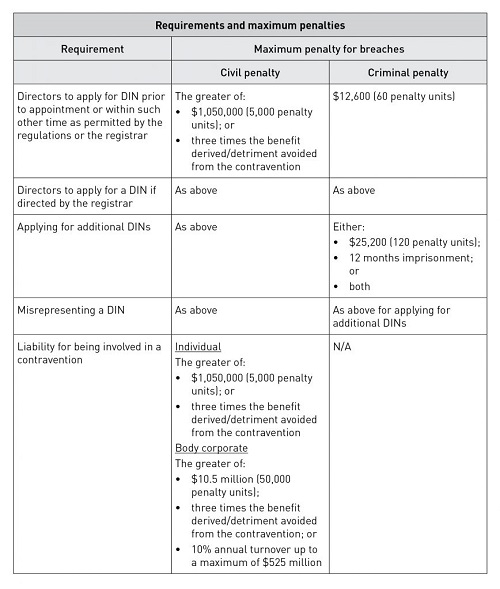 Targeting illegal phoenixing with a range of new measures

As discussed in detail in our last article, the Treasury Laws Amendment (Combatting Illegal Phoenixing) Bill 2019 (Combatting Illegal Phoenixing Bill) has been introduced to target unlawful phoenixing. The bill received assent on 17 February 2020 and accordingly, the majority of provisions outlined below have come into force as at 18 February 2020.

Phoenixing of companies occurs when company directors seek to avoid paying company liabilities by winding up the debtor company and transferring its assets to a new company. In 2018, phoenixing was estimated to cost the Australian economy about $2.9 billion to $5.1 billion annually.

The Combatting Illegal Phoenixing Bill has introduced novel creditor-defeating provisions, which are designed to specifically target transfers of company assets for less than market value (or the best price reasonably obtainable) which have the effect of preventing, hindering or significantly delaying the availability of a company's assets during liquidation for creditors.

The creditor-defeating provisions operate alongside the current broader director duties provisions, including sections 181, 184 and 588G, which require directors to act in good faith, for a proper purpose and to prevent trading whilst insolvent.

The new laws also mean that:

Directors (and other officers) may face civil and/or criminal liabilities if they fall afoul of the new provisions. The penalties include: 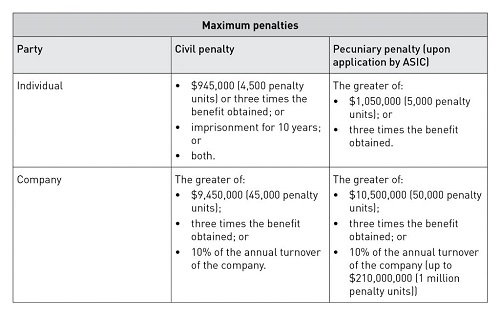 Expanding the reach of DPNs

As previously reported, under Division 269 in Schedule 1 of the Taxation Administration Act 1953 (Cth) the Commissioner may serve a Director Penalty Notice (DPN) on a director making him or her personally liable for their company's failure to meet its superannuation guarantee charge (SGC) or PAYG withholding obligations, and requiring the director to pay the relevant sums within 21 days of being served with the DPN. The personal exposure of directors under DPNs may be significant, as it is equal to the actual or an estimate of the unpaid obligation of the company.

The Combatting Illegal Phoenixing Bill extends the regime to include a company's unpaid GST, meaning that the possible personal exposure of directors will increase. This change will take effect from 1 April 2020.

The Combatting Illegal Phoenixing Bill has also changed the law concerning the resignation of directors so as to prohibit directors from resigning and then improperly backdating resignations to avoid personal liability.  In short, the law will prevent a sole director from resigning in circumstances where it would leave a company without a director.

The law is directed to preventing directors engaging in phoenixing by resigning and thereby intentionally transferring accountability to other directors, such as a 'straw director'. As articulated in the Explanatory Memorandum, a 'straw director' is usually someone without any real involvement in a company, who has little to no knowledge of their directorship or employment, and who may have limited assets to frustrate any recovery process. In some circumstances, a straw director can also be a deceased or fictious person.

A comparative summary of the law is as follows: 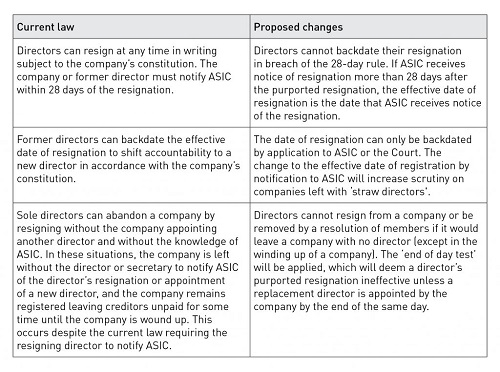 Directors of corporations operating internationally should be aware of the proposed changes contained in the Crimes Legislation Amendment (Combatting Corporate Crime) Bill 2019 (CCC Bill). The CCC Bill makes it an offence under the Criminal Code Act 1995 (Cth) for a body corporate's failure to prevent foreign bribery by an associate, if the bribery is committed for the profit or gain of the body corporate. An offence under this section carries a penalty the greater of either:

Notably, a statutory defence is incorporated into the CCC Bill, where a body corporate can show that they had adequate procedures in place to prevent the commission of a foreign bribery offence by an associate. The CCC Bill gives the Minister express powers to publish guidance on what steps a body corporate can take in order to engage the defence. With the CCC Bill is currently before the Senate, directors of companies operating internationally should ensure that any published Ministerial guidance is incorporated into company policies, employment contracts and/or supply agreements if the Bill is passed.

Where to from here?

After a relatively slow Parliamentary year in 2019 due to the prorogation of Parliament for the Federal election, it is likely that the Federal Government will push hard for the proposed changes outlined above in the first half of 2020.  These changes will mean that: