On December 22, 2017, President Donald Trump signed into law new tax legislation, which is colloquially known as the Tax Cuts and Jobs Act (the "Act").1 The Act sets forth the most extensive tax changes in more than thirty years, although many of the provisions are set to expire after 2025. The Act was passed on a strictly partisan basis under "reconciliation," which required only fifty-one votes in the Senate, rather than sixty. Because of the partisan nature of the legislation, there is always the political risk that the benefits provided under new law may change in the future.

The new law will significantly impact both individual and corporate taxpayers. Individual tax rates have been reduced, and there have been modifications to individual deductions. Taxpayers operating businesses through "flow-through" entities may receive a favorable deduction on certain types of income, and corporate tax rates have been reduced to 21%. In the estate and gift tax arena, there is the potential for tremendous planning opportunities because the new law doubled the amount that may pass tax-free to non-spouse, non-charitable beneficiaries.

I. ESTATE AND GIFT TAX.

Prior to 2018, the exemption for lifetime gifts or transfers at death to non-charitable and non-spouse recipients was $5.49 million, and spouses could utilize a deceased spouse's unused exclusion amount at the second death. This effectively allowed spouses to transfer $10.98 million to beneficiaries without estate of gift taxes. Transfers in excess of this amount were taxed at a rate of 40%.

Under the Act, the exemption amount doubles (and is indexed for inflation). This means that each individual may transfer approximately $11 million (less any amounts used in earlier years on taxable gifts) to non-spouse, non-charitable beneficiaries beginning in 2018 through the year 2025, when the exemption amount returns to current levels of $5.49 million (indexed for inflation). For married couples, they will be able to transfer $22 million (again, less any exemption previously used) of wealth to beneficiaries under the current law without being taxed. This creates a significant planning opportunity for taxpayers with assets valued above the current exemption levels to transfer significant wealth using the newly increased exemption amounts.

The Act preserves the current basis adjustment at death, which commonly results in a "step-up" in basis to the fair market value of assets at the date of death. Inherited assets with significant appreciation may be sold with little to no income tax following the death of owner of the assets. For individuals with wealth less than the current exemption amount, there may be significant income tax planning opportunities under the new law by taking advantage of a "step-up" in basis for assets at the death of the first spouse and the death of the second spouse.

The income tax rates for non-grantor trusts and estates remain compressed under the Act, with the top rate of 37% applying to income in excess of $12,500. But as with prior law, income distributed to beneficiaries may be deducted at the trust level and taxed at the beneficiaries' rates.

II. CHANGES TO THE CORPORATE TAX RATE AND A NEW PASS-THROUGH REGIME.

One of the most significant changes in the Act is the change in the corporate tax rate (i.e., for corporations taxed as C corporations) and a new deduction for business owners who operate their business as a pass-through entity. The changes to the corporate tax rate were made permanent under the Act, which reduces the top rate of tax from 35% to 21%. Note the income of a C corporation is subject to "double taxation"--once at the corporate level and then again in the hands of the individual shareholder when the income is distributed as a dividend to them.

For taxpayers that operate their business through a pass-through entity, i.e., as a partnership or LLC, S corporation, or sole proprietorship, the Act also provides a beneficial new deduction. The new deduction under I.R.C. 199A is one of the most complex and fact-intensive provisions of the Act. In general, there will be a 20% deduction against certain types of pass-through business income. The deduction will apply to individuals (and trusts) with business income from so-called "pass-through entities" such as partnerships, LLCs, and S corporations. Married individuals filing jointly with less than $315,000 in taxable income may take full advantage of the 20% deduction. However, for individuals with income in excess of $315,000 ($157,500 for non-married taxpayers), a complex set of limitations may apply.

The Act contains additional provisions that affect the income tax of individual taxpayers. A summary of a few of these changes are outlined below.

Beginning on January 1, 2018, the top individual rate was reduced from 39.6% to 37%. Significantly, the top rate for joint filers now begins at income in excess of $600,000, compared to $480,050 under prior law. The rates and brackets for individuals filing joint returns are as follows: 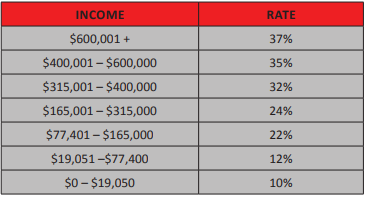 Elimination of Limits on Certain Itemized Deductions. Before the new Act, married taxpayers filing jointly with adjusted gross income in excess of $313,800 ($261,500 for single taxpayers) were required to reduce their itemized deductions under a formula referred to in tax jargon as the "Pease Limitation." This reduction formula has been repealed until January 1, 2026.

Mortgage Interest Deduction. The Act reduces the mortgage interest deduction on new loans to $750,000. Acquisition loans in excess of $750,000, but not greater than $1 million taken out before December 31, 2017, are grandfathered. While the deduction for interest on home equity loans has been eliminated, taxpayers refinancing their homes may still deduct the mortgage interest as long as the amount refinanced does not exceed the balance owed at the time of refinancing.

Standard Deduction and Personal Exemptions. The new law doubles the standard deduction from $6,350 to $12,700 for single filers and from $12,000 to $24,000 for married taxpayers filing jointly. Personal exemptions (currently $4,050 per family member) are eliminated.

The changes to the tax law under the Act are extensive and will impact individual and corporate taxpayers as well as business owners who operate their business as a pass-through entity. In many situations, the changes to the tax law will provide unique planning opportunities, but because of the 2025 sunset provision, a limited window of time exists to take advantage of these opportunities.