What companies are subject to the deduction limit?

Any entity that is taxed as a corporation (including S-corporations, certain publicly traded partnerships, disregarded entities, and foreign corporations) is subject to the deduction limitation for a year if, on the last day of the taxable year, that company (a) has issued securities that are required to be registered under Section 12 of the Exchange Act (whether or not the securities are actually registered), or (b) is required to file reports under Section 15(d) of the Exchange Act (whether or not the reports are actually filed).

It doesn’t matter where the public company is on the company organization chart, once there is a company that should have registered or filed reports, the deduction limit applies to all compensation paid by any company in the affiliated group of companies to a covered employee, with one exception described below (see How is the deduction allocated among companies in an affiliated group?)

If during a year the company ceases to be required to register their outstanding securities (even if the company does not actually terminate their registration during the year) and is not required to file reports under section 15(d), the deduction limit ceases to apply to that company.

The proposed regulations clarify that if no company in an affiliated group is “public” under this standard on the last day of a tax year, the deduction limit doesn’t apply for that year.

How is the deduction allocated among companies in an affiliated group?

The deductible amount is generally allocated among the affiliated companies in proportion to that company’s share of the compensation paid to the covered employee. Here is an example of the allocation between affiliated companies. This example is the same regardless of which company is the applicable public company.

Note that pay from the other affiliated group members still count toward both limits. Here is an example of the allocation where A is publicly traded, B and C both have public debt, and the employee is a covered employee of A and B but not of C.

As you see from these examples, although having more than one public company in an organization chart can trigger a loss of deduction for more people (because each company will have a list of covered employees), the actual total deduction may be increased for a person who is a covered employee for both companies and who is paid by both companies.

Vorys comment: For companies that have public subsidiaries, it may be tempting to restructure compensation to attempt to maximize the deduction. Be warned, the preamble to the proposed regulations indicate that the IRS intends to use their anti-abuse authority to address situations that they find abusive.

Who is a covered employee?

As you may recall, the covered employee definition generally triggers a permanent taint for anyone who serves as the principal executive officer (PEO), the principal financial officer (PFO) and the top 3 highest paid executive officers at any time during a taxable year. There are numerous situations where this list will not line up with the individuals disclosed on the summary compensation table.

Vorys comment: We recommend that compensation committee adopt a resolution after the end of each tax year that lists the covered employees for that tax year (and the applicable prior years). Remember that the test applies for each tax year and this could result in multiple lists during a fiscal year.

As described above, once a person becomes a covered employee, the aggregate of all pay from all companies within the affiliated group that is payable to that covered employee is subject to the deduction limit if there is any company within the group that is required to be registered or is required to file. This includes compensation paid by any company in the affiliated group (a) for services as a director, employee, independent contractor, partner or in any other capacity; (b) for current or past services; and (c) whether paid to the covered employee or to someone else (including a former spouse or a beneficiary).

Vorys comment: Data tracking across all affiliates will be important.

The proposed regulations also clarify (with 31 examples) when a company inherits people that were on someone else’s list of covered employees. Note, the covered employee also remains on the original company’s list.

Vorys comment: This makes 280G cutback provisions even more important. Provisions that only cut back if the employee would realize less after taxes may result in a nominal increase in the net amount realized by an executive in a change in control transaction, but that typically minor increase often comes at the cost of a large lost corporate deduction.

Compensation that is payable pursuant to a written binding contract that was in effect on November 2, 2017 are taxed under the old rules.

For example, if on November 2, 2017, the covered employee held a performance based award that contained the typical negative discretion provision, but the applicable state law would apply a limitation on that discretion, the company could treat that portion of the award that could not have been unilaterally forfeited as grandfathered and deductible under the old rules.

Vorys comment: Just because an amount is grandfathered doesn’t mean that it is deductible. For example, grandfathered severance would still count against the $1M deduction limit.

The existence of a clawback right will not trigger a loss of grandfathered status until the event that triggers the clawback occurs. However, in the unlikely event that a clawback right is triggered, whether or not the company is able to recover any amount, the portion of the benefit that would be subject to the clawback right would not be grandfathered. For example, if an employee’s contract would provide a right to a bonus of $2M, subject to clawback, and the company’s past practice would expect that the company would have a binding obligation to pay $500K if the clawback right were triggered, the bonus deduction would be reduced by (a) any amount actually recovered by the company, (b) $500K of the net bonus paid would be analyzed under the old Regulation Section 1.162-27 and (c) the rest of the net bonus paid would be analyzed under the new Regulation Section 1.162-33.

A material modification of a grandfathered compensation arrangement will trigger a prospective loss of grandfathered status, but will not affect deductions for prior years. 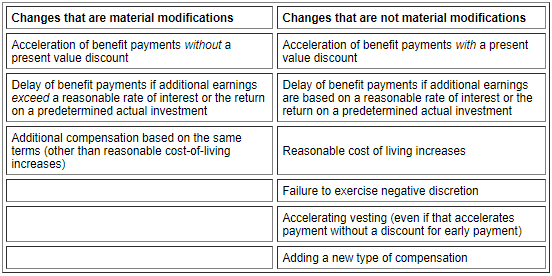 Each benefit under a grandfathered arrangement is evaluated separately. For example, if an employment agreement provided for base pay, a discretionary bonus, and severance based on a multiple of the base pay plus bonus, the company would need to evaluate whether the contract was a binding obligation to pay each of these types of compensation.

The following example assumes that on November 2, 2017, a covered employee had an employment agreement that had a term through June 1, 2021, with automatic extensions: 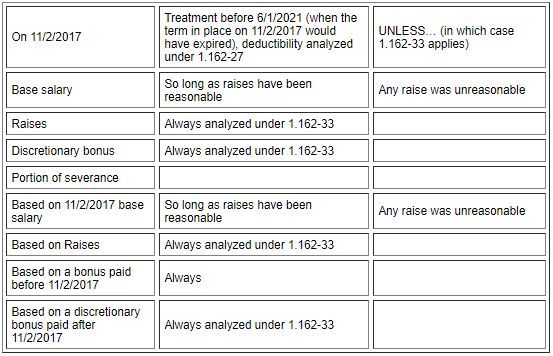 COORDINATION WITH CODE SECTION 409A

The preamble to the proposed regulations contain two important topics. Some plans and employment agreements provided that compensation that was not expected to be deductible must be automatically deferred and be payable in the year following the individual’s termination of employment. Treasury Regulation Section 1.409A-2(b)(7)(i) provided that payment may be delayed past the designated payment date to the extent that the company reasonably anticipates that the payment would not be deductible due to Code Section 162(m) if it was paid when originally scheduled. Importantly, that regulation required that all schedule payments must be delayed.Coordination with Code Section 409A

In addition, the preamble indicated that companies would be given until December 31, 2020 to adopt amendments to deferred compensation arrangements that required deferral until the amount would be deductible. Any payment that would have been payable prior to December 31, 2020 but for the deduction limitation must be paid no later than December 31, 2020.

Vorys comment: Companies should review their deferred compensation arrangements to confirm whether amendments should be adopted.