Price Gouging Alert for the Carolinas

Last week, Hurricane Florence made landfall. But anticipating its effects before it made landfall or was officially upgraded from a tropical storm, on Sept. 7, 2018, North Carolina Governor Roy Cooper signed Executive Order No. 51 declaring a state of emergency. South Carolina’s Governor Henry McMaster followed suit the next day. These declarations triggered each state’s price gouging statute. Price gouging or unconscionable pricing statutes generally prohibit businesses from selling or offering to sell consumer goods or services at unreasonable, unconscionable or excessive prices after a state of emergency is declared. As North Carolina Attorney General Josh Stein explained, North Carolina’s statute aims to capture prices that are “just out of whack from what they should be.1

North Carolina and South Carolina are not the only states with price gouging or unconscionable pricing statutes. About 35 states have them, including California, Florida, Louisiana and Texas. These price gouging statutes, however, vary with respect to how they are triggered, how long they last, what they cover, how price differences are measured and what penalties they carry. States of emergency are also declared for a wide array of reasons including fires, earthquakes, blizzards and civil disturbances. This time of year, major hurricanes are among the most common reasons for a state of emergency. 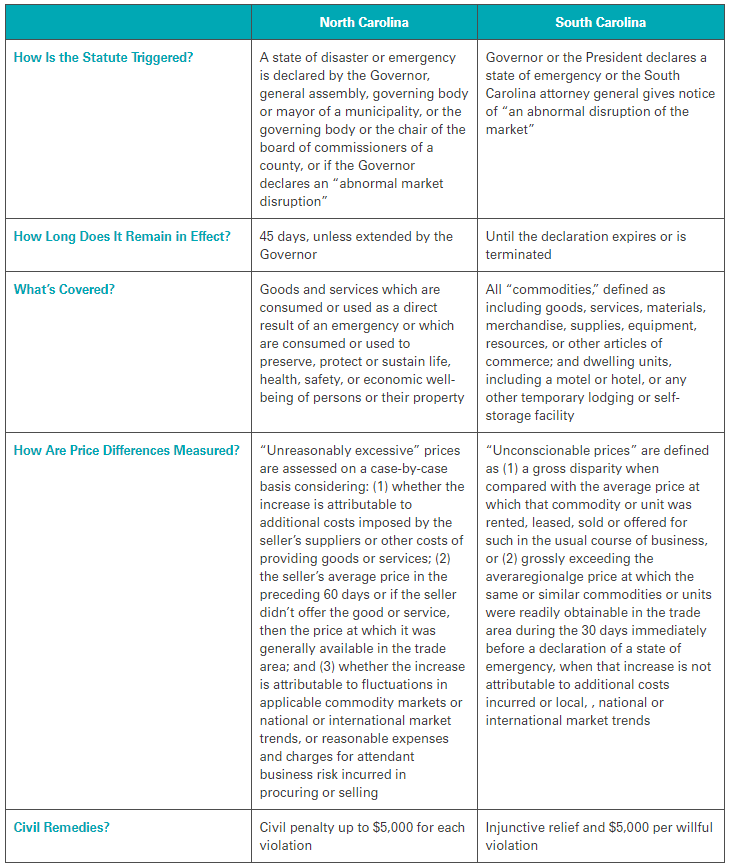 What Can I Do Now?

While these statutes generally do not include a private right of action, attorneys general take note of consumer complaints, and significant price increases will not go unnoticed. Further, the negative press generated by price gouging during an emergency situation may also harm a business. These statutes are nuanced and not always intuitive. This alert provides some high-level discussion of issues to be aware of, but does not address every nuance of these price gouging statutes.

Businesses operating in South Carolina, North Carolina or any other state in which a state of emergency is currently in effect should carefully evaluate the prices they charge. Businesses should seek the advice of counsel regarding what constitutes permissible pricing in the event of an emergency. This is particularly true if your prices are noticeably higher than your competitors’ prices or you plan to increase your prices.

If you determine that your prices would likely violate the price gouging statute, you should lower your prices as soon as practicable. Similarly, as AG Stein explained, his office will sometimes call businesses as a first step in its effort to resolve price gouging allegations. Businesses receiving such phone calls should take these allegations relayed by the AG’s office seriously and strongly consider revising their pricing. The cases pursued by the AG are instances in which the businesses refuse to alter their pricing.

Finally, those businesses located in areas not currently impacted by a state of emergency but that sell goods or services that could be impacted by a price gouging statute should consider contacting their local attorney general’s office to find out what they could do in the event of a state of emergency. Some states, like South Carolina, specifically note that price increases approved by an appropriate government agent do not violate the statute. If you believe that there may be a reason to raise your prices during a state of emergency, you may want to consider discussing this issue with an AG in advance. Additionally, in South Carolina, trade associations, corporations or partnerships may register as an agent for the purpose of being notified when the AG gives, retracts or renews notice of an abnormal disruption of the market.