1. Design Patent May Only Encompass Designs on Stated Article of Manufacture

In its decision, the Federal Circuit affirmed the district court’s dismissal for failure to state a plausible claim of infringement of a design patent titled “Pattern for a Chair,” holding that the accused baskets could not infringe a patent to a chair design. Although the text of the design patent referenced a chair, the figures only depicted a fabric pattern, as shown below. 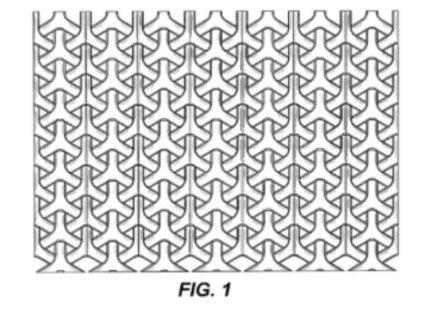 In addition to relying on Supreme Court precedent and Patent Office regulations, the Federal Circuit relied on the patentee’s actions during prosecution to support its holding. The Federal Circuit found that the patentee could not claim a broader design because it amended the title, claim, and figure descriptions to recite “pattern for a chair” after the patent examiner found that the original title of “FURNITURE (PART OF-)” was “too vague.” By amending the claim to secure allowance, it could not recapture the lost claim scope.

Takeaways This decision provides grounds for consumer products companies to avoid infringing broad design patents to unspecified articles, especially where “all of the drawings fail to depict an article of manufacture.” In light of Curver, patent applicants need to be thoughtful about the verbal descriptions included in design patent applications. Applicants seeking broad protection should consider ways to broadly identify the articles of manufacture and avoid limiting the article to too narrow of a particular use. Relatedly, design patent applicants need to carefully consider amendments to the verbal descriptions in the application. In the past, many applicants viewed these amendments as minor informalities to secure allowance. After Curver, applicants need to carefully consider the scope the amendment will sacrifice.

2. Design May Not Be Patentable If Intended Use Was Obvious

In Campbell Soup Co. v. Gamon Plus, Inc., the Federal Circuit altered the design patent obviousness analysis by allowing a prior art design to render a design obvious (and thus unpatentable) based on the intended use of the prior art design, not just the ornamental design itself. Design patent obviousness involves a two-step process to determine whether the design would have been obvious and thus unpatentable. First, the challenger must identify a primary reference—a single design that creates “basically the same visual impression” as the claimed design. Second, once the primary reference has been determined, other secondary references may be used to modify the primary reference to create a design that has the same overall visual appearance as the claimed design. The Federal Circuit’s decision in Campbell Soup addresses the primary reference requirement.

In its decision, the Federal Circuit vacated and remanded the Patent Office’s finding of nonobvious. The two design patents at issue related to gravity-fed can dispensers (e.g., canned soup displays for grocery stores). The claimed designs (the solid line portions) are depicted in blue below. 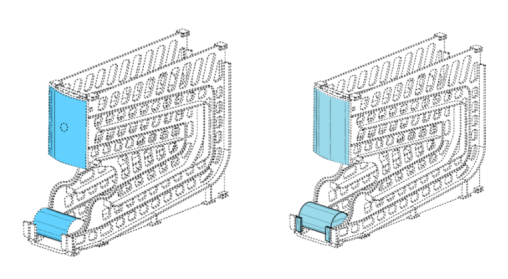 In the underlying inter partes review proceedings, the Patent Office found that the claimed designs were not obvious because the challenger failed to identify a primary reference. The challenger identified the Linz reference (below) as a primary reference. The Patent Office found that Linz did not create substantially the same visual impression as the claimed designs because it lacked a cylindrical object (e.g., soup can). On appeal, the Federal Circuit disagreed because Linz “is made to hold cylindrical objects in its display area.” The Federal Circuit further noted that the parties did not dispute that the Linz design was for dispensing cans and that a can would be used in the system. 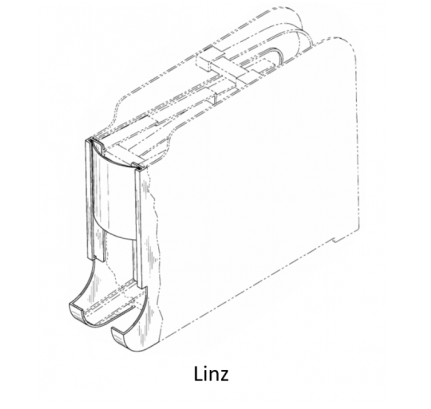 Those defending against infringement of multicomponent designs may be able to argue that the intended use of a prior art design with a known component can satisfy the primary reference requirement. In the discovery phase of litigation, the accused infringers should try to gain admissions from the patentee and its experts regarding the use of prior art designs.

In Columbia Sports Wear North America, Inc. v. Seirus Innovative Accessories, Inc., the Federal Circuit reversed the district court’s summary judgment of infringement of a design patent for heat reflective material. The claimed design is depicted below next to the accused design.

There is uncertainty surrounding the final outcome and impact of this decision because Columbia has petitioned for rehearing by the full Federal Circuit. Nonetheless, and although the Federal Circuit did not address the specific significance of the addition of a logo in the infringement analysis, a significant takeaway from this opinion is that, under certain factual scenarios, a logo may be considered a potential difference between a patented design and an accused product. For those companies that might want to attempt to design-around an existing patented design, if the addition of a logo modifies a portion of the accused product that is relevant to (i.e., included within and not superfluous to) the scope of the patented design, such a modification may now be a relevant consideration in those attempts. Conversely, companies looking to protect their product designs should consider a robust filing strategy that includes protecting not only the overall product design, but also portions of the product design, keeping in mind the portions of their product design that would-be competitors might be most likely to attempt to modify through the inclusion of an ornamental logo.