The European Patent Office refused to grant a software patent for scoring search engine results based on history data. Here are the practical takeaways from the decision T 0817/16 (Document scoring/GOOGLE) of 10.1.2019 of Technical Board of Appeal 3.5.07:

Assigning a score to a document based on the frequency and the amount of changes to the document is not a technical task.

A reduction in the number of search queries and the corresponding saving of resources does not qualify as a technical effect of (improved) recommendations, as they depended on subjective choices made by the user (confirmation of T 306/10)

A chain of effects cannot be used as evidence of a technical effect if one of the links between the effects is not of a technical nature (but, for example, of a psychological nature) (confirmation of T 1741/08)

This European patent application relates to search engines. Its background section explains that, ideally, a search engine provides the user with the results most relevant to the user’s query. Relevant documents are typically identified by comparing the search-query terms to the words contained in the documents, as well as other factors like the existence of links to or from the documents (see Google’s famous PageRank algorithm).

The invention as claimed proposes scoring a document on the basis of “history data” that reflects (a) the frequency at and (b) the amount by which the content of the document changes over time. This history data is obtained by “monitoring signatures of the document”. 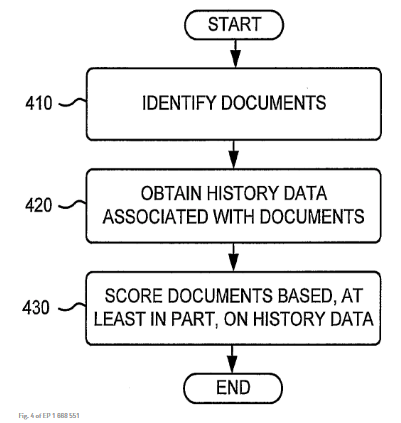 This is one of the rare cases where the claim would almost have failed the patent-eligibility hurdle since it did not necessarily require any technical means:

Unlike claim 1 of the first and second auxiliary requests, claim 1 of the main request is not worded as a “computer-implemented” method and therefore arguably encompasses mental acts as such, which are excluded from patentability under Article 52(2) and (3) EPC. But since the appellant at the oral proceedings expressed its willingness to limit the claim to a “computer-implemented” method, the Board will, for the purpose of assessing inventive step, interpret claim 1 accordingly.

The Board considered a general-purpose computer to be the closest prior art. The question was then whether the algorithmic features of the claim contribute to the solution of a technical problem, so that they would need to be taken into account in the inventive step assessment:

These steps define the algorithm underlying the computer-implemented method in abstract, functional terms that do not imply any interaction with specific technical means. In particular, the step “monitoring signatures of the document” calculates and compares signatures for different versions of the document without specifying a technical mechanism by which different versions are detected or retrieved. And “generating a score for the document” and “scoring the document” merely associate the document with a calculated score value. The steps of claim 1 are thus non-technical, apart from their implementation on a computer.

As the avid reader will know, non-technical features in a patent claim may nevertheless “become technical” if they interact with the technical features of the claim (here: the “computer” which the Board read into the claim for the sake of argument) to produce a technical effect over a general-purpose computer. But not in this case:

The Board concurs with the Examining Division that assigning a score to a document based on the frequency and the amount of changes to the document is not a technical task, even if performed by a computer. The appellant originally did not dispute this, but at the oral proceedings it suggested that providing good scores improved the search results returned by the search engine and that improved search results resulted in a reduction in the number of search queries, which amounted to a saving of resources.

A similar argument was dealt with in decision T 306/10 of 4 February 2015 in the context of recommendation engines. The board there considered that a reduction in the number of search queries and the corresponding saving of resources did not qualify as a technical effect of the (improved) recommendations, as they depended on subjective choices made by the user (see reasons 5.2). It referred to decision T 1741/08 of 2 August 2012, reasons 2.1.6, where the argument was made that a chain of effects cannot be used as evidence of a technical effect if one of the links between the effects is not of a technical nature (but, for example, of a psychological nature).

In the present case, the appellant’s argument fails for the reason alone that claim 1 is silent on what the generated score is used for. Merely assigning a score to a document is not a technical effect. This is not different if the score is somehow based on the frequency and the amount of changes made to the document.

Therefore, the Board ultimately decided that the patent application does not provide any technical contribution which could be the basis for an inventive step.