SaaS, cashless and convergence drive tech to the top

While tech M&A deal value and volume were both fractionally down from 2018's figures, these numbers need to be put into perspective, as 2018 was a particularly strong year. Last year's total M&A value was higher than all years on record with the exception of 2018 and 2015. The 2019 numbers attest to the continued appetite for M&A in a sector that is transforming industries as diverse as automotive, financial services and healthcare.

Software as a Service (SaaS) remains a highly active M&A target, with two of the top three technology deals—Tableau Software's US$15 billion acquisition by Salesforce.com, and the US$11.8 billion consortium deal led by Hellman & Friedman and Blackstone for Ultimate Software—demonstrating the popularity and size of this part of the market, where buyers are consolidating and/or attracted by its recurring revenues.

The largest deal, Global Payments' acquisition of Total System Services for US$25.7 billion, also demonstrates there is plenty of room left for M&A in the payments technology area. Indeed, the arrival of 5G in the US is expected to transform the payments landscape. The transition to cashless and cardless transactions has been far slower in the West than in markets in Asia (mobile payments grew in China at a 123 percent CAGR between 2013 and 2018, according to a recent McKinsey report). This is likely to spur significant M&A activity over the short- to medium-term as financial services and technology players seek to grasp the growing cashless opportunities. 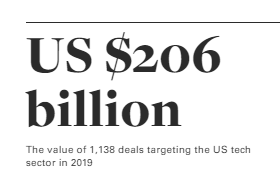 The convergence of technology and healthcare (healthtech) is also rapidly maturing and investors and strategic buyers are increasingly seeing the potential for digital healthcare to improve efficiency and outcomes for patients. J.P. Morgan Chase, for example, acquired electronic medical billing and information specialist InstaMed for US$500 million in May. Meanwhile, technology giants are also entering the healthcare space through M&A: Deals such as the acquisition of online pharmacy PillPack by Amazon for US$753 million demonstrate their intentions, in particular, as more traditional acquirer Walmart was outbid in the process.

Absent a major shock, convergence-driven M&A is expected to continue for the foreseeable future, with advances in technologies such as artificial intelligence set to continue to disrupt a variety of sectors. Apple's June 2019 acquisition of Drive.ai, a self-driving startup, for US$200 million is one example, while others include Hewlett Packard Enterprises's deal to buy analytics business MapR for an undisclosed sum and Nike's purchase of retail predictive analytics company Celect for a reported US$110 million.

The increased adoption of these technologies, combined with improved mobile capability as 5G rolls out, may create fertile ground for M&A. However, there may be some softening of valuations, prompted by the fact that we are entering an election year and as a result of the strengthening of powers held by CFIUS (see page 5) to investigate technology M&A.