Unfair contract terms laws to be extended to insurance contracts

Consultation on the exposure draft Bill is open until 28 August 2019. The exposure draft Bill is available here and the explanatory memorandum is available here. Following this consultation, a final Bill will be introduced into Parliament and it is proposed that the new law will apply to all new issues and renewals of insurance contracts after an 18 month transition period.

The UCT regime currently applies to most financial products and financial services through the Australian Securities and Investments Commission Act 2001 (ASIC Act). The effect of the legislation is that a term in a consumer or small business contract which is unfair is void. A term is unfair where:

The current UCT regime does not apply to insurance contracts, as section 15 of the ICA expressly provides that a contract of insurance is not capable of being made the subject of relief under any other Act, a State Act, or an Act or Ordinance of a Territory. The rationale for this exclusion has been that insurance contracts are a special category of contracts that have their own protections, such as the duty of utmost good faith under the ICA and insurance contracts have special characteristics which make them unsuitable for protections under the UCT regime.2

Extension of the UCT regime

A summary of the key terms in the new exposure draft Bill are as follows:

The existing statutory duty of utmost good faith is not impacted by the proposed legislation and will continue to apply to insurance contracts.

What has changed since the proposed model law in 2018?

Notably, a number of proposals in the proposed model law from June 2018 have since been omitted or amended. A summary of the key changes are as follows: 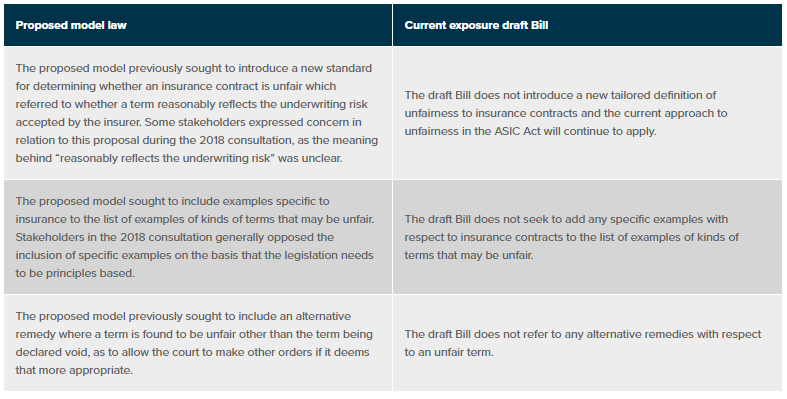 This streamlined version of the original proposed model law enables the government to move quickly to introduce the UCT regime for insurance contracts and sets a hard date for the insurance industry to work towards for the review and rationalisation work of existing policy terms and conditions.

A focus of attention is likely to be on policy exclusions and limitations where an insured cannot otherwise rely on section 54 ICA to avoid or limit their application. However, the lack of any detailed legislative guidance of what constitutes unfairness will be of concern to the industry, as minds may differ in the assessment of whether a term will be reasonably necessary to protect the legitimate interests of an insurer.

In dealing with this, the experience of the banking sector in dealing with the UCT regime will be relevant. Insurers may also want to take into account the broader expectations on them in the post-Royal Commission environment where notions of community expectations are now generally accepted as forming part of their operational and risk landscape.