(Don't) call me maybe?: ACMA releases its compliance priorities for 2021-22

The Australian Communications and Media Authority (ACMA) has announced its compliance priorities for 2021-22. These priorities reflect the key areas for industry compliance on which the ACMA intends to focus over the next 12 months.

The 2021-22 priorities build on recent enforcement activity by both the ACMA and the ACCC, and include a renewed focus on consumer protection (particularly for vulnerable and disadvantaged consumers) and the regulation of emerging 5G and electromagnetic energy (EME) technologies. 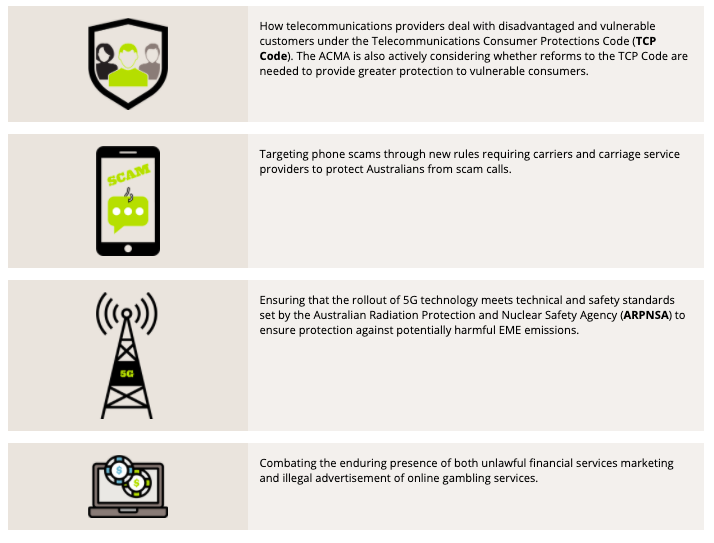 The ACMA has recently issued significant and record penalties to businesses found to have breached the unsolicited communications laws relating to spam advertising and telemarketing.

We expect these trends towards higher penalties and increased enforcement action by the ACMA to continue in 2021-22, particularly in the areas nominated in this year's compliance priorities and in the context of the rising use of digital and telecommunications services during the pandemic. In 2020:

The ACMA has also said that it will be prioritising small business concerns about delays in complaint handling by telecommunications providers.

The protection of vulnerable consumers has been a recurring theme of the ACMA's compliance priorities in recent years. This year in particular, the ACMA has signalled a renewed focus on compliance with the relevant provisions of the TCP Code, which require carriage service providers to be aware of best practices when selling to and dealing with vulnerable consumers.

Of course the TCP Code is not the only source of consumer protection provisions for telecommunications services. Conduct in breach of the TCP Code, Spam Act or Do Not Call Register Act 2006 (Cth) may also amount to a breach of the Australian Consumer Law (ACL), including the misleading and deceptive conduct, unconscionable conduct, and consumer guarantee provisions. For example, Telstra was recently fined $50 million, the second-highest penalty handed down under the ACL, in proceedings brought by the Australian Competition and Consumer Commission (ACCC) for engaging in unconscionable conduct when five of its licensed Telstra-branded stores sold mobile contracts to Indigenous consumers who did not understand and could not afford the contracts.

The ACMA's focus on protecting vulnerable consumers from poor selling practices by carriage service providers, and the recent success of the ACCC against Telstra, is in line with a recent report issued by the Telecommunications Industry Ombudsman that found that several issues in advertising and information provided in respect of phone and internet products meant that consumers may be signing up for products and services, sometimes unknowingly, that they do not understand or need.

Carriage service providers that fail to comply with the TCP Code may be liable to penalties up to $50,000 per breach.

The financial consequences of failing to comply with the Spam Act are serious - companies with no prior record which contravene the unsolicited message provisions of Spam Act two or more times on a given day face a maximum pecuniary penalty of $444,000 per day. For companies with a prior record which engage in equivalent conduct on a given day, the maximum pecuniary penalty is higher at $2.2 million per day.

If the ACMA does not decide to start proceedings in the Federal Court, it may opt instead to issue an infringement notice of up to $220,000 for each day a business contravenes the Spam Act 50 or more times in the one day.

Given the frequency of automated emails sent by businesses, there is the potential for these figures to multiply quickly if a company has contravened the Spam Act multiple times on multiple days.

According to the ACCC's Scamwatch program, consumers have lost over $20 million to phone scams in the first quarter of 2021 alone. Phone scams also account for 55% of all scams reported.

The ACMA will be monitoring compliance with the recent Reducing Scam Calls Industry Code which took effect in December 2020. This requires carriage service providers to actively monitor their networks to identify, trace and block scam calls, as well as share information about scam activity with other providers. To date, the Code has resulted in around 55 million scam calls being blocked by providers.

The ACMA will be ensuring that EME emissions meet the standards set by the ARPNSA, and that providers follow the relevant rules and regulations in relation to EME levels, including under the Radiocommunications Act 1992 (Cth) and associated standards which prescribe rules in relation to devices including mobile phones, wi-fi modems and routers, two-way radios, baby monitors, remote controls and smart meters.

The ACMA will also be actively monitoring for unlawful marketing sent by SMS, email and phone of financial service products, particularly to communications made to vulnerable consumers.

Over $2 million have been paid by businesses in penalties for breach of spam and telemarketing rules in the last two years. The ACMA's most recent compliance report notes that consumer complaints about spam and telemarketing most commonly relate to financial services, followed by the retail, solar and gambling industries. In particular, functional unsubscribe (or 'opt-out') systems continue to be a key compliance issue for the ACMA. Under the Spam Act, commercial electronic messages must relevantly:

Telecommunications, financial services and gaming providers should expect both the ACMA and ACCC to be proactive during 2021-22, and familiarise themselves with the regulators' agendas and prepare for scrutiny. The trend towards higher penalties in these regulatory areas continues, and we expect that both agencies will be emboldened to pursue enforcement action following recent precedent.

Now is the time for businesses to review their compliance programs, especially as they relate to dealings with vulnerable consumers and the other areas nominated for regulatory scrutiny this year.