Decree of Tax Benefits for the Northern Border Region

As previously informed, President Andres Manuel Lopez Obrador announced a plan of special incentives to foster the economy of the northern border region of Mexico.

In this respect, on 26 December 2018, the National Commission of Minimum Wages published an increase to the daily minimum wage for the Northern Border Zone, in order to be of 176.72 pesos, which is effective as of 1 January 2019, whereas on 31 December 2018, the Ministry of Finance and Public Credit published in the Federal Official Gazette the Decree of Tax Benefits for the Northern Border Region (the "Decree"), effective as of 1 January 2019.

Below, please find a summary of the Decree:

What is the geographical area covered by the "Northern Border Region"?:

Although President Lopez Obrador previously declared that the Northern Border Region would cover a strip of 20 to 30 kilometers parallel to the international border line with the United States of America, the Decree establishes a different geographical area.

Specifically, the Decree provides that the tax incentives will be applicable to taxpayers that undertake business activities in the border municipalities listed below (jointly referred to as Northern Border Region): 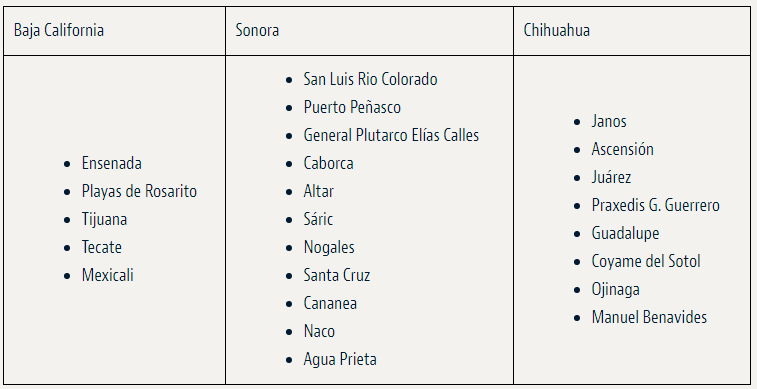 What are the specific tax incentives established in the Decree?

Who is entitled to the tax benefits established in the Decree?

What are the relevant dates for the application of the Decree?

Are there limitations on the application of the tax benefits?

Is it possible to relinquish or withdraw the application of the tax benefits prior to the end of a tax period?