On 25 October 2021, a Texas jury awarded a $353 million verdict to a pedestrian - United Airlines wing walker Ulysses Cruz - who was struck by a van at Houston's Bush Intercontinental Airport in September 2019. Cruz was left paraplegic as a result of the accident. Cruz filed a lawsuit against Allied Aviation Fueling Co of Houston Inc (the owner of the van) and Reginald Willis (the driver of the van) in November 2019 in Houston (the "Defendants").

The case was initially set for trial for January 4, 2021. In November 2020, the Court issued an order continuing the trial to May 17, 2021. The Defendants filed a writ of mandamus after the Judge denied a jury trial and ordered a bench trial. The First Court of Appeals in Houston granted the petition to vacate the Judge's rulings denying their request for a jury trial.

The case was presented to an in-person jury on October 8, 2021, after being transferred to another Harris County Judge. 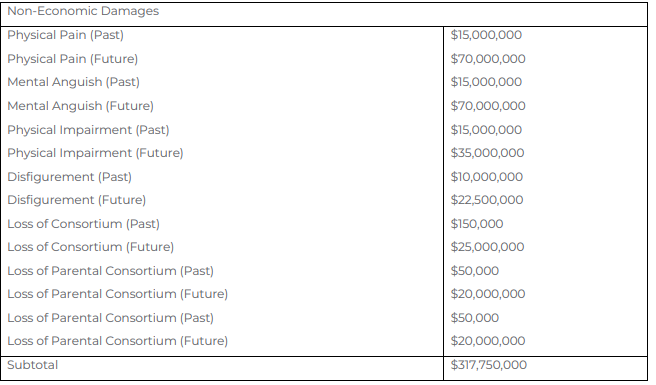 The Texas legislature enacted House Bill 19 ("HB 19") to end exorbitant verdicts in Texas relating to commercial vehicle accidents by bifurcating the driver's liability from any liability argument against the driver's employer. However, HB 19 only applies to cases filed after September 2021. If HB 19 applied to the Cruz case, the jury would need to find Willis, the driver, liable in a first trial before a second trial against Allied, the employer, would be heard. In doing so, a jury would not know which company employed the driver and the extent of their fault, unless the trial advanced, after which damages of the employer would be assessed. It would be purely speculative to suggest that the liability findings would have been different. However, the separation of liability findings from the damage award could provide a buffer and lead to lower damage awards.

The Cruz verdict follows a trend in Texas jury verdicts awarding absurdly excessive damages for non-economic damages. While in the past non-economic awards totaled between one to three times economic damages (with a multiple of three being found only in the most distributing of injuries), juries are now awarding upwards of ten time economic damages seemingly without much concern. While such awards were seen in smaller accidents (e.g., work slip-and-falls; automobile "fender benders"), the trend in larger cases such as Cruz highlights the issue moving forward. It defies reason for a jury to award $35 million in economic damages and more than $317 million in noneconomic damages.

This trend is due in large part to the plaintiffs' bar finding ways to sidestep past tort reform measures, which placed limitations on the amount of punitive damages that could be awarded in a particular case. Rather than plead and ask the jury to award punitive damages in personal injury and wrongful death cases, plaintiffs' counsel are using pleas to jurors' emotion under what is a variation of the Reptile Theory (having the jury place themselves in the place of the injured plaintiff). When presenting their case, plaintiffs ask the jury to award specific amounts for the duration of the plaintiff's pain and suffering. Asking for $1 million for each minute of suffering is now the norm, and recent jury verdicts suggest such requests are becoming more than acceptable in Texas Courtrooms.

We are monitoring appeals to the Texas Courts of Appeal and Texas Supreme Court asking those courts to set aside such verdicts as "excessive". With the recent trend of juries to award nine-figures for non-economic damages, we are cautiously optimistic that these courts will put a stop to the excessiveness and afford the Texas Legislature time to react with further, appropriate tort reform.

Our extensive experience overseeing complex, high exposure cases such Cruz places us at the forefront of defending and monitoring similar cases for our commercial and insurer clients. Please let us know if we can be of assistance.