On October 10, 2018, the Canadian Securities Administrators (“CSA”) published Staff Notice 51-357 Staff Review of Reporting Issuers in the Cannabis Industry, which detailed a long list of issues with the disclosure of reporting issuers operating in the cannabis industry.

Provincial securities regulators in Alberta, British Columbia, Ontario and Quebec conducted a review of the disclosure of 70 publicly-listed cannabis companies with varying levels of involvement in the industry and with operations in different countries. The most significant takeaways relate to licensed cannabis producers (or “LPs”). 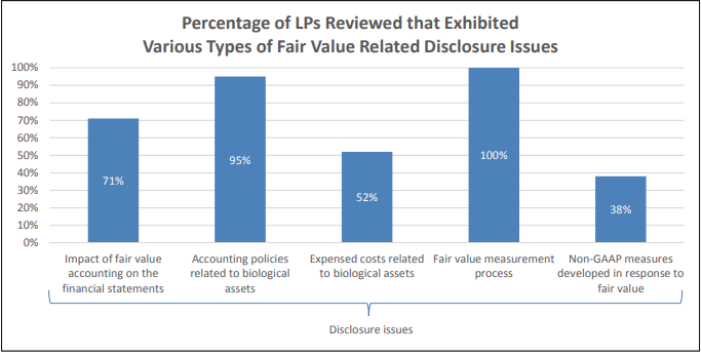 There are two key takeaways from the recent CSA staff notice:

Companies involved in agricultural activities (such as LPs) are required under IAS 41 to measure living plants, or biological assets, at their fair value. As a result, LPs place a value on their crop while it’s still growing or waiting to be sold, reporting the unrealized, non-cash change gains (or losses).

Since cannabis production is currently growing at a faster rate than sales, and the fair value of those plants is being recognized long before any sales take place, LPs can end up reporting massive gross profit margins. Canopy Growth Corp., the world’s largest cannabis company, reported a gross profit margin of 97% (according to IAS 41 reporting standards) for 2017. By way of comparison, Apple Inc. reported a gross margin of 38% in 2017.

Even with perfect disclosure, ordinary investors will likely struggle to understand the financials of LPs. Since the CSA found that all LPs need to improve their disclosure relating to fair value adjustments, investors are being placed at a significant disadvantage.

The data – and implications of real-time bidding