Benchmarks are expanding to include ever more companies and industries.

Businesses also criticize aspects of the approaches that some benchmarks follow, such as how to credit appropriately or differentiate companies that attempt to be more ambitious on human rights issues. In addition, some companies find engagement difficult when the major benchmarks are themselves still changing in an evolving landscape of corporate human rights compliance. At the same time, benchmarks are expanding to include ever more companies and industries and, in many cases, can provide data-driven insights to support corporate strategy and management as well as visibility to stakeholder audiences that follow benchmark rankings. 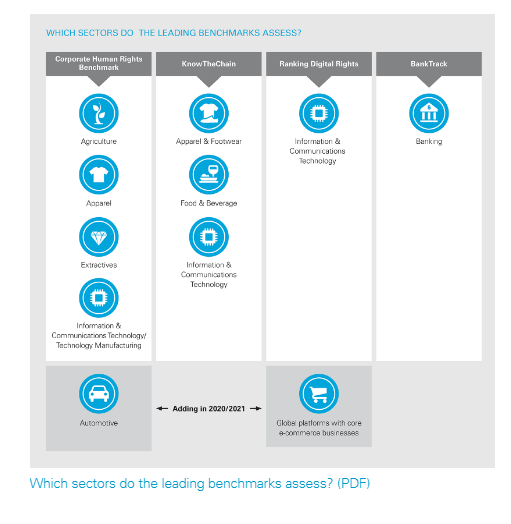 According to Kilian Moote, Project Director for KTC, which produces a benchmark focused on forced labor and human trafficking in supply chains, benchmarks are a means to an end: "The most productive response from a benchmarked company should not be ‘How do we respond to the benchmark?' Rather, companies should ask ‘Do we understand the issues, and are our procedures appropriate to address those issues, understand the impacts of our programming and talk about our efforts?'"

Another major benchmark, the CHRB, assesses companies on six themes—governance and policies, embedding respect and human rights due diligence, remedies and grievance mechanisms, human rights practices, response to serious allegations (defined below) and transparency—and how companies' approaches to each align with the UN Guiding Principles on Business and Human Rights (UNGP). Endorsed by the UN Human Rights Council in 2011, the UNGP are the first global, governmentally agreed standard that provides human rights guidelines applicable to all business enterprises and furnishes a global framework around which international practices and policies are converging. The UNGP forms the basis for many human rights benchmarks and human rights disclosure and compliance regulatory requirements. Legislation and regulations, including (but not limited to) the UK Modern Slavery Act (MSA), California Transparency in Supply Chains Act (CATSCA) and France's Duty of Vigilance Law, all establish an expectation by governments that companies implement the UNGP.

The 2019 CHRB rankings revealed that only a handful of companies made demonstrable progress in aligning their systems to the UNGP, while most companies scored well below the leaders (50 percent of benchmarked companies scored less than 20 percent overall), and some companies did not engage at all. Those that improved their scores year-on-year, though, tended to be companies that meaningfully engaged with the CHRB. Two elements seem to have contributed to the highest and lowest CHRB corporate scores in 2019: (i) responses to so-called “serious allegations” (a measurement theme focused on responses to significant allegations from external sources) and (ii) corporate governance and policies. According to the CHRB’s 2019 Key Findings Report, “of the almost 150 allegations reviewed, in only 3 percent of cases do the companies show that they provided remedy that was satisfactory to the victim.”28

RDR focuses on data privacy issues at 24 of the world’s most powerful internet, mobile ecosystem and telecommunications companies. In 2019, the RDR Corporate Accountability Index revealed that, despite some improvements, most companies still do not adequately inform consumers about data collection and sharing practices, lack transparency with respect to data requests and content removal, and fail to anticipate and manage privacy and expression-related risks associated with business models and new technologies.

BankTrack’s 2019 Human Rights Benchmark indicates that four out of five of the 50 largest private commercial banks are “failing” on human rights, having implemented less than half of the UNGP requirements. According to BankTrack: Most banks’ reporting covers only internal policy developments (not key human rights risks, specific impacts or related indicators); no banks have established or participated in effective grievance mechanisms for individuals affected by financing impacts; just over one-fifth of assessed banks demonstrate senior-level sign-off on policy commitments; and none communicate how their efforts lead to improvements for rights-holders. The average score of benchmarked banks in 2019 was 28.6 percent, up just slightly from 28.3 percent in 2016.

Investor interest drives much of the current emphasis on benchmarking

Many investors view benchmarks as a type of rating with ESG data and increasingly use them to evaluate companies as investment prospects.

Investors, lenders and other stakeholders are hungry for data, and ESG reporting and concerns about social and environmental risks—and corporate management of these risks across global value chains—increasingly drive their decisions. Performing well in benchmarks, when combined with corporate disclosure regimes, can improve a company’s access to capital, particularly from investor groups that use benchmark results in their investment decisions.

Accustomed to reviewing financial and other information from ratings agencies, many investors view benchmarks as a type of rating with ESG data and increasingly use ESG-related criteria to evaluate companies as investment prospects. As legally required and voluntary disclosure and transparency obligations grow, investors are likely to become even more accustomed to including benchmark rankings in their decision-making. Lenders also may be committed to considering environmental and human rights in their financing decisions by their adherence to the Equator Principles, a risk management framework used by financial institutions to assess and manage environmental and social risks in project finance.

Eric-Paul Schat, Senior Director of Sustainability, Environmental Health & Safety at NXP Semiconductors, describes benchmarking as a “critical information that helps investors make decisions, which of course depends on the context.” Raul Manjarin, a sustainability expert at Credit Suisse, says he informs his due diligence analysis by using information from multiple sources and reviewing transaction-specific documentation (such as environmental and social impact assessments), answers to sustainability questions sent directly to companies, and corporate policies, commitments, certifications and documented capacity and performance.

As more investors promote human rights and practice responsible business conduct in their own operations, they will become even more likely to turn to benchmarks to assess their potential investments. Some benchmarks have enlisted investors to identify companies and sectors to assess.

For example, KTC has been endorsed by investors representing more than US$4.8 trillion in assets, the majority of whom say they use KTC data to advocate for action with companies. The Investor Alliance for Human Rights highlighted BankTrack’s 2019 rankings as providing “critical information” for its members as they engage portfolio banks on aligning their policies and practices to the UNGP.29

The CHRB, endorsed by the Investor Alliance for Human Rights, collaborates with the Alliance and the UN Principles for Responsible Investment (PRI) on a number of initiatives. According to the CHRB, some investors report integrating CHRB scores into their automatic voting processes (for example, voting against corporate management at annual general meetings if they score poorly), and investors representing more than US$5 trillion under management wrote to all companies benchmarked by CHRB in 2016 to ask how they were responding to results. In 2016, when the US Securities and Exchange Commission requested comments on a proposal to require listed companies to report on sustainability and corporate responsibility issues, a number of investor organizations referenced the CHRB and KTC in their comments supporting an ESG reporting requirement.

Shareholders use benchmarks to press for corporate action

According to the CHRB and RDR, a number of shareholder resolutions have used data from these benchmarks to attempt to influence corporate behavior. In 2017, the Australasian Center for Corporate Responsibility formally licensed CHRB’s methodology as a basis for its research into the human rights performance of listed Australian companies and introduced a shareholder resolution at the annual general meeting of a low-performing company, which contributed to the eventual development of an agreement addressing labor in its supply chains. A US shareholder advocacy organization, As You Sow, has called attention to some companies’ CHRB and KTC scores as a basis for proposals to pressure corporate boards to report on company processes to identify and analyze human rights risks in their operations and supply chains.

Other entities produce their own benchmarks. For example, a UK shareholder entity, ShareAction, has created a Workforce Disclosure Initiative that asks companies to report data on workforce management and supply chains and provides feedback on their disclosures. At the same time, some companies on the receiving end of these and similar campaigns have relied on strong benchmark scores as evidence that their compliance is sufficient.

Whether or not they expressly reference benchmark data, shareholder human rights resolutions are on the rise. Kraft Heinz Co. implemented a global human rights policy in response to a 2019 shareholder resolution requesting information on the company’s process for identifying and assessing human rights risks across its operations and supply chain (the resolution was withdrawn when the company agreed to publish a policy and implement a due diligence process). A similar proposal at Microchip Technology Inc. achieved a majority of votes (51.3 percent). Meanwhile, a proposal that would have required Macy’s Inc. to do the same was defeated at the company’s annual shareholder meeting with 35 percent voting in favor and 52 percent against.

Over time, benchmark results can be a tool that differentiates your business from your competitors among clients, customers and other audiences.

To date, there is little evidence that benchmark scores significantly affect consumer purchasing decisions or lead to immediate consumer boycotts. Still, one stated aim of some benchmarks is to influence how consumers approach socially responsible companies, and several of them are exploring ways to improve consumer literacy on these issues.

The CHRB says it has engaged with a number of governments that have expressed interest in, or applied elements of, the CHRB’s methodology in national-level assessments of companies. Within the EU, discussions of EU non-financial reporting and due diligence issues mention the CHRB. Campaigns in certain European countries seek to use an abridged version of the CHRB methodology as evidence of the need for legislation requiring human rights due diligence. CHRB results also may be influencing some government reviews of National Action Plans (NAPs) on business and human rights (government-led strategies designed to help countries fulfill their responsibility to protect against human rights abuses by third parties, including businesses). The CHRB is providing input on a study assessing potential revisions to Germany’s NAP, and the UK has defended its decision to delay its NAP review, in part to allow the CHRB to demonstrate the proof of concept of benchmarks in a mixed-regulatory approach to improving human rights performance. The CHRB argues that without a baseline understanding of corporate implementation of the UNGP, there is little hope of tracking the impact of (or need for) additional regulations, a lesson learned from the lack of oversight of the implementation of the UK MSA.