2019 Budget : Loosening Restrictions on the Interprovincial Trade in Wine and Beer

On April 8th, Bill Morneau, Canada’s Minister of Finance, introduced the Budget Implementation Act, 2019 (the “Budget Bill”). Included in the Budget Bill is an amendment to the Importation of Intoxicating Liquor Act (the “IILA”) that will remove all remaining federal barriers to interprovincial trade of alcohol and permit direct-to-consumer shipping of alcohol across provincial borders to the extent that the receiving province also permits such transactions.

Concretely, this means that the federal government will no longer restrict Canadian wineries, breweries, and distillers from shipping their products to consumers across Canada, allowing restaurants, hotels, and private consumers to access Canadian products not sold by their provincial local liquor authority. This is an exciting opportunity for the Canadian alcohol industry which employs nearly 20,0000 people and had sales exceeded $8 billion in 2018, including exports of almost $1 billion.

Previously, section 3(1) of the IILA prohibited both the importation and inter-provincial transport of alcohol by anyone except the Crown and provincial liquor authorities. So, if the LCBO or the SAQ did not carry that exceptional Okanagan Pinot Noir, or the surprisingly good IPA from a small brewery in North Bay, you had to apply to the provincial liquor authority for a licence to purchase it. Now, only importation without a licence will be prohibited, allowing for “direct-to-consumer” sales across provincial borders.

Here is the text of the proposed changes to subsection 3(1): 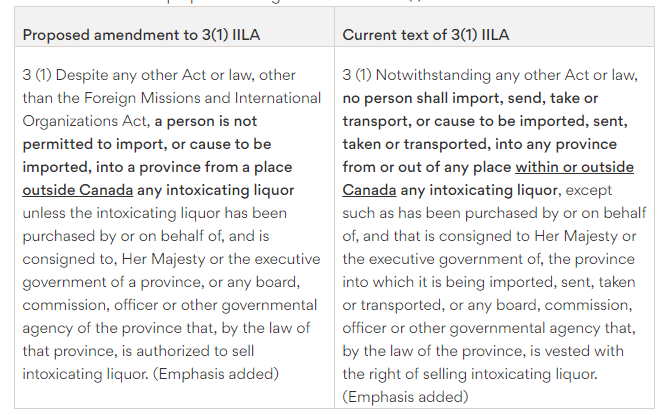 A catalyst for this revised thinking on the interprovincial trade in alcohol was the case of Gerard Comeau, 64, a resident of New Brunswick. Gerard was arrested in 2012 after buying beer in Pointe-à-la-Croix, Quebec, and trying to bring it home to Tracadie, New Brunswick. He was fined $292.50 for violating New Brunswick’s limits on the possession of alcohol that had not been purchased from the New Brunswick Liquor Corporation. Mr. Comeau challenged the fine and the case went all the way to the Supreme Court. The Court held that provincial restrictions on the trade in alcohol could be constitutional if those restrictions were incidental to another valid legislative purpose. The Court upheld New Brunswick’s restriction on out-of-province alcohol because the objective of the law was “not to restrict trade across a provincial boundary, but to enable public supervision of the production, movement, sale, and use of alcohol within New Brunswick.”With this amendment, the Federal government is abandoning the field of interprovincial trade in alcohol to the provinces, who will continue to enact whatever rules they believe are appropriate.

Since inter-provincial shipments of alcohol continue to be subjected to provincial legislation that varies from one province to the other, it is recommended that you consult an advisor to determine how your business could benefit from the change in federal law while also complying with provincial laws.