In OTO, L.L.C. v. Kho, the California Supreme Court refused to enforce an employee’s arbitration agreement on the basis that it was unconscionable. Unconscionability has long been a common-law defense to contract enforcement. What makes OTO v. Kho problematic for employers is the court’s weakening of the traditional “Does the agreement shock the conscience?” standard. The court in this case invalidated the agreement because arbitration was a less affordable and less accessible dispute resolution mechanism than other potentially applicable state law mechanisms. Specifically, the court found the parties’ arbitration procedure to be less advantageous to the employee in the resolution of his wage claims than the “Berman” procedure, an administrative process through which an employee can receive substantial assistance in taking his wage claims before the state Labor Commissioner.

Three years into his employment, the plaintiff, a mechanic for an auto dealership, was asked to sign an arbitration agreement, among a few other documents. The HR employee who handed him the paperwork stood waiting for him to sign it, suggesting—according to the plaintiff—he could not take time to read it over first. Without reading any of them, the employee signed and returned all the documents. One year later, after his employment ended, the former employee filed a wage claim with the Labor Commissioner. The company filed a motion to stay the matter and enforce the arbitration agreement and refused to attend the Labor Commissioner/Berman hearing, where the employee was awarded approximately $155,000 in wages and penalties. The company filed a de novo appeal with the superior court, which found the arbitration agreement unconscionable. The company appealed and the state court of appeal reversed, finding the employee did not prove unconscionability under the traditional standard.

When is an Agreement Unconscionable? 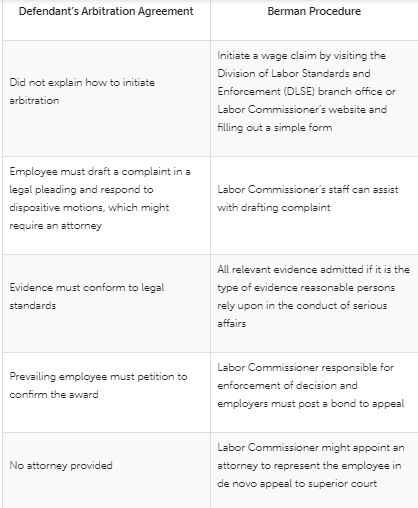 The court found support for its unconscionability analysis in its earlier opinion, Sonic-Calabasas A, Inc. v. Moreno (2013) 57 Cal.4th 1109, 1146 (Sonic II). In Sonic II, the court stated that a Berman waiver could be a factor in a court’s unconscionability analysis. However, as pointed out in Justice Chin’s dissent, Sonic II’s articulation of the standard for substantive unconscionability still required enforcement of the arbitration agreement as long as the arbitration would provide employees with an accessible, affordable process for resolving wage disputes that did not effectively block every forum for redress, including the arbitration itself. But, in OTO v. Kho, the court set the bar much higher, requiring the employer to show the arbitration procedure to be as affordable and accessible as the Berman procedure, at least for wage claims. Justice Chin opined that the majority’s holding violated binding principles under the Federal Arbitration Act, prohibiting courts from refusing to enforce arbitration on the basis that another forum was preferable or that arbitration would not be effective in vindicating a statutory right.

In other words, if this decision is appealed, the California Supreme Court could be heading for another reversal by the United States Supreme Court. In the meantime, employers might consider taking steps to ensure agreements are implemented in a way that does not suggest they are procedurally unconscionable. Without procedural unconscionability, courts cannot advance to the substantive unconscionability analysis in OTO v. Kho, as a showing of both types of unconscionability is required for a court to refuse to enforce an agreement on that basis. Employers can consider the following: