A sigh of relief: Court of Appeal restores order in significant privilege decision

The Court of Appeal has handed down its eagerly awaited decision in The Director of the SFO v Eurasian Natural Resources Corporation Limited[1]. The case considers legal privilege in the context of an investigation concerning alleged criminal offences. It therefore has important implications for organisations investigating potential wrongdoing ranging from health, safety and environmental offences through to matters concerning product safety and, as in this particular case, allegations relating to fraud, bribery and corruption.

The legal community can breathe a collective sigh of relief as the Court of Appeal upheld ENRC's appeal that documents prepared during an internal investigation by ENRC's lawyers and forensic accountants were protected by litigation privilege. However, there remains some uncertainty, particularly for larger organisations, of who constitutes the "client" for the purposes of legal advice privilege. The Court of Appeal suggested this issue will need to be considered by the Supreme Court in this or a future case.

ENRC is a mining and natural resources company, operating in various parts of Africa and other high risk countries, through its various subsidiaries. In 2011, ENRC engaged external solicitors and forensic accounts to investigate allegations of fraud, bribery and corruption against certain African companies it was seeking to acquire.

The Serious Fraud Office (SFO) commenced a criminal investigation into the allegations. Using its investigatory powers under the the Criminal Justice Act 1987, the SFO required ENRC to provide specified documents relating to the investigation which ENRC refused to provide on the basis of legal professional privilege.

At first instance the Commercial Court found that documents prepared by ENRC's lawyers and forensic accountants during an internal investigation into allegations of fraud, bribery and corruption were not privileged. This meant that ENRC would have to disclose these documents to the SFO as part of its investigation in to the alleged offences.

Without a successful appeal this decision had the potential to severely restrict the application of legal professional privilege to documents created in the context of internal investigations to uncover any potential wrongdoing.

Legal professional privilege (LPP) protects confidential legal communications where disclosure is requested by any third party, including a court, law enforcement agency, regulatory body or an opponent in proceedings.

There are two main forms of LPP:

The documents in dispute and how the court, at first instance and appeal, ruled on the privileged status of those documents is set out in the table below: 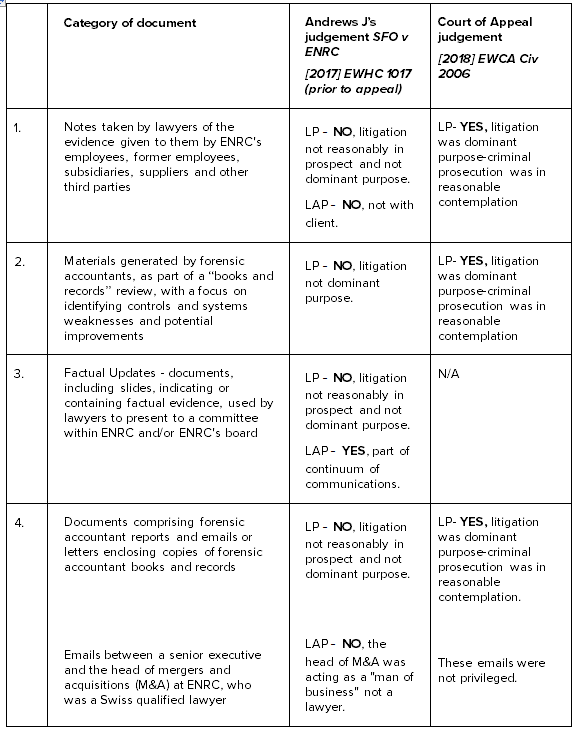 Decision of the Commercial Court

At first instance the Judge ruled in favour of the SFO and required ENRC to provide the documents. The court ruled, in general terms, that:

The Judge also found that the lawyers' interview notes were also not protected by legal advice privilege as disclosing them would not betray the trend of the legal advice (in simplistic terms, there was no legal analysis).

Decision of the Court of Appeal

• Litigation privilege did apply to most of the documents in dispute. The court allowed ENRC's appeal agreeing that criminal legal proceedings were in reasonable contemplation when the SFO initiated its investigation. The evidence was that the documents were brought into existence for the dominant purpose of resisting or avoiding contemplated criminal proceedings. The fact that ENRC intended to share materials from its internal investigation with the SFO does not mean litigation privilege does not apply.

Legal advice privilege to be considered by the Supreme Court…?

Given that the majority of the documents in dispute were held to be covered by litigation privilege, the issue surrounding legal advice privilege became less relevant. Nonetheless, in relation to the question of who is the "client" for the purposes legal advice privilege, the Court of Appeal held that if it had been open to it to depart from the approach taken in the case of Three Rivers (No.5) it would have been in favour of doing so. In its view, Three Rivers (No.5) decided that communications between an employee of a corporation and the corporation's lawyers could not attract legal advice privilege unless that employee was tasked with seeking and receiving such advice on behalf of the client corporation.

However, the Court felt bound by this decision and held that this question would have to be considered by the Supreme Court, either in this or a future case.

What does this mean for my organisation?

Whether communications made in the context of internal investigations are protected by legal professional privilege is largely a question of fact with reference to all of the circumstances.

However, organisations of all sizes, including multinationals, charities, SMEs and local authorities, can and should take steps to ensure that privilege is carefully considered and managed upon becoming aware of any concerns regarding any potential wrongdoing. It should not be just assumed that privilege applies.

In practice many internal investigations, for instance following a workplace accident, are often commissioned and concluded without any involvement of internal or external lawyers. The result is that many documents, emails, interview notes, reports etc. may have been created, widely circulated and commented upon without the protection of legal professional privilege. This may have potentially significant legal as well as commercial consequences.

We would therefore strongly encourage organisations to instruct legal counsel at the very outset to maximise the protection afforded by privilege. In the context of health, safety and environmental offences, for example, a proper legal analysis of an incident at the very outset can often provide for a basis upon which legal professional privilege can be asserted at an early stage.

If you have any comments or queries in relation to this article or, more generally, in relation to the steps you can take to manage privilege in the context of internal investigations, please get in touch.