Businesses with employees in Illinois should take note of new legislation increasing the state's minimum wage. The new legislation, recently signed into law by Governor JB Pritzker, provides for scheduled increases over the next six years, with the first change occurring January 1, 2020. Illinois' current minimum wage stands at $8.25, but effective January 1 the minimum wage for non-tipped employees in Illinois rises to $9.25, followed by these successive hikes: 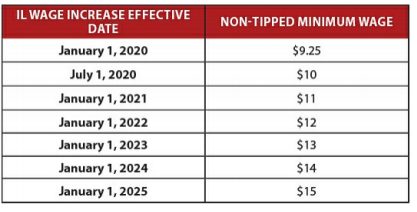 Notably, the legislation also increased the minimum wage for non-tipped workers under 18 years of age, who historically had a slightly lower rate requirement in Illinois. Beginning January 1, 2020, a worker who is under 18 must receive the standard minimum wage if he or she performs duties for more than 650 hours during any calendar year. For employees under 18 with hours below 650 in a calendar year, the legislation sets specific rates that will also increase gradually over the next six years.

The legislation also made several changes to the damages and penalties section of the Illinois Minimum Wage Law, the most significant of which entitles employees to recover treble the amount of any wage underpayments in a civil action (instead of only the principal underpayment amount). Also, employees previously could receive damages equal to 2% of the amount of any underpayments for each month following the date payment was due. That amount is now 5%.

With this new legislation, Illinois joins a national trend of states like California, Massachusetts, and New York aiming to reach a $15 minimum wage through gradual increases over the next several years. Several municipalities have gotten into the game as well. New York City for example, increased its municipal minimum wage to $15 for entities with 11 or more employees. Cities like Minneapolis and St. Paul now have ordinances gradually increasing minimum wage to $15 for certain employers over the next several years. Chicago’s minimum wage will increase again on July 1, 2019 to $13 for non-tipped workers, with successive increases tied to the Consumer Price Index beginning July 1, 2020.

Businesses with Illinois employees must anticipate these changes as they forecast payroll expenses and headcount. Unfortunately, the Illinois General Assembly gave businesses fewer than 12 months to brace for the impact in January 2020. You can remain on alert to the changes over the next few years in Illinois and other states where you might do business.