In this series, we shine the spotlight on legal proceedings involving Augmented Reality/Virtual Reality (AR/VR) technology. We will discuss the AR/VR technologies involved, the intellectual properties at issue, and the litigation strategies and tactical maneuvers of the parties in litigation.

VIT apparently acquired ownership of the ’599 patent in February 2016 but appears not to have any products of its own using the patented technology. Since acquiring the ’599 patent, VIT has filed lawsuits claiming infringement against a variety of companies engaging in the VR market, including companies utilizing VR laboratories, social simulation VR systems, and VR pornography.

VIT’s complaints against Exxon, Jacobs Engineering, Mortenson Construction, and Siemens are nearly identical. VIT alleges that the defendants directly and indirectly infringe claims 1, 2, 8, and 9 of the ’599 patent. In addition to alleging that the defendants infringe themselves, VIT alleges that each of the defendants induce infringement by “offer[ing] a service to users of [a] virtual reality system, such as maintenance workers and engineers,” allowing users to interact with virtual performers in a VR environment. VIT’s complaints conclude by asking the Court to find infringement and award damages to compensate for past, present, and future infringement. VIT also seeks attorneys’ fees.

The ’599 patent is titled “Interactive Virtual Reality Performance Theater Entertainment System.” It claims variations to VR systems, including allowing participants and performers to interact in the VR environment using input/output devices. The patent also claims showing video images of live performers such that users can engage in audio communication with the other participants and virtual performers. VIT states that the ’599 patent claims technology that allows three-way communication between users, live performers, and the VR environment for the first time. Figure 3 of the ’599 patent, reproduced below, is a representation of the preferred use of this technology, where participants in a “[VR] performance theater” use the technology to interact in a virtual environment. Actual presence in a VR theater is not required, however. 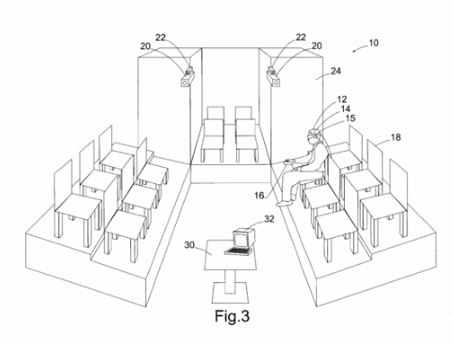 The ’599 patent states that its multi-participant VR performance theater improves on previous VR technology that focused on providing interaction between individual users and computer-generated VR environments. The technology described in the ’599 patent focuses on allowing communications between multiple participants, which may be live or pre-recorded, in the immersive VR environment.

Without identifying them by name, VIT’s complaints accuse each of the defendants’ customer support and training systems of infringing the ’599 patent. According to the complaints, the defendants use VR technology to provide training for their devices to new users across the globe. Similarly, VIT alleges, the defendants use the technology to provide interactive customer support without the need to be physically present in the field of use. VIT cites press releases and news articles discussing each of the defendants’ use of VR to support their claims of infringement.

If these cases don’t settle, we may see the defendants answer the complaints, or perhaps move to dismiss the complaints as deficient in some respect. Other actions they may take include filing petitions for inter partes review challenging the patentability of the ’599 patent. We will keep you posted of future developments in these AR/VR litigations.