Copyright is for losers, trade marks are for Banksy — the Banksy trade mark case explained

​“Possibly the least poetic reason to hold an art show”. That’s what Bristol’s greatest and most secretive street artist Banksy reportedly had to say about one of his latest ventures — a pop-up, viewing-only store which appeared in Croydon earlier this month to preview artwork and merchandise available from his online store at grossdomesticproduct.com. Such a comment stems from his reluctance to produce art in order to help him keep hold of his trade mark registrations. Why has one of our most celebrated artists been forced to set out his stall on the legalities of the grubby world of commerce, and shift his attitude towards intellectual property (IP)?

The company Pest Control Office Limited (PCOL) — a “handling service acting on behalf of the artist BANKSY” — obtained a series of European Trade Mark Registrations (EUTMs) for images of some of the artist’s most widely-known works, including ‘flower bomber’ (more commonly known as ‘Rage, Flower Thrower’). An EUTM affords the holder protection for a broad range of goods and services — in this instance, including “printed matter; posters; pictures, prints of pictures, framed pictures” (under trade mark class 16), as well as paints, handbags, umbrellas, clothing, Christmas tree decorations, rugs and various other products. 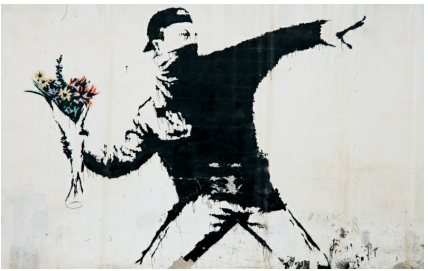 A greetings card company, Full Colour Black Limited (FCB), which reproduces street art on cards and related products, has applied to invalidate the registration. It claims, firstly, that the mark can’t function as a trade mark because it doesn’t possess distinctive character allowing someone to recognise it as a trade mark and/or it’s descriptive of the goods involved. Secondly, it claims that the application was filed in bad faith.

Traditionally, artists have relied on copyright protection to stop others copying their works, but Banksy is famously ‘known’ to have made the claim that ‘copyright is for losers’.

This tension between using IP rights to protect artists for the time and skill put into their work and strictly enforcing IP rights like copyright to stifle creativity goes back generations. Picasso famously said “good artists copy; great artists steal”, endorsing the flagrant taking of another’s work. Banksy, it appears, belongs to the same school of thought, alongside notorious US artist Richard Prince, who finds himself in court once again for the ‘rephotographing’ of various Instagram posts. Such examples may suggest that contemporary artists add to their appeal by being outlaws.

Exit through the gift shop (and buy our stuff)

However, in Banksy’s case, it’s clear through his historic actions that while he doesn’t have a problem with fans copying his work for non-commercial use, he does indeed take issue with anyone appropriating his work for commercial gain. This was demonstrated when a trade mark infringement claim was brought in 2018 against an Italian company which organised a Banksy exhibition in Milan. The exhibition very much encouraged visitors to ‘exit though the gift shop’, right into a load of Banksy-branded merchandise. While the company was found to have done no wrong in using Banksy’s name to advertise the exhibition, the sale of certain branded merchandise was found to be infringing. 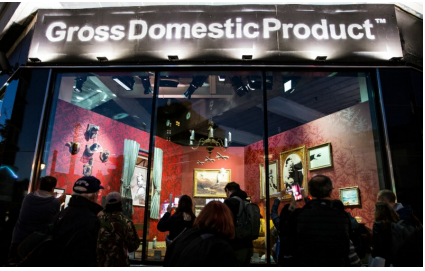 The Banksy ‘brand’ and the problem with copyright

Damien Hirst has said “becoming a brand name is an important part of life… It’s the world we live in”. Is this why Banksy’s turning to trade mark protection?

If you’re looking to stop third parties using your name (or, in this case, your tag) on a product label, enforcing a trade mark registration should be the most effective route. However, when trying to protect an image deriving from an artwork, copyright is usually the more obvious choice.

A key problem for Banksy is that we don’t know his identity. Even if the artist has turned 360 degrees on his ‘losers’ stance, he’ll likely need to disclose his identity to assert his copyright claim, unless he can somehow assign his rights to PCOL and keep the assignment papers secret. 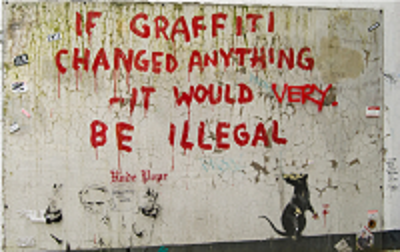 Furthermore, you can run into a number of other issues with copyright claims. In certain territories, any attempt to claim copyright in street art and graffiti may be overruled by public policy which aims to protect streets from being ‘defiled’. Also, in countries which don’t have a copyright register (like the UK), there’s the question of providing sufficient evidence to support a copyright claim — presuming that such a claim can be made for street art in the first place. In addition, there’s the fact that copyright is term-restricted, whereas trade mark registrations can (in theory) be renewed in perpetuity. This may encourage some owners of artist copyright to obtain trade mark protection.

While there are a bunch of reasons for Banksy to file for trade mark protection, is FCB’s invalidation action justified?

FCB opened its case by making clear that ‘flower bomber’ has never been used as a trade mark and only ever reproduced as a work of art. However, this is a claim for invalidity, not non-use — so we can park that argument for now (except insofar as it might relate to the bad faith issue).

On the ground that the mark is descriptive, FCB drew an analogy with the UKIPO decision LINKIN PARK and related cases. The LINKIN PARK decision means that if a band has become well-known, it’s too late to protect its name for printed matter (posters, calendars, etc.). This is because the public would expect a number of different entities to sell such goods — not just the band and its official licensees. Since this case applied to the band’s name — and you can see that those selling unofficial merchandise would need to reference the band to describe the content of the printed matter — the mark in such a context is descriptive. The claim in the Banksy case is that there was no policing of the use of ‘flower bomber’ by third parties — so even if it were at one point clearly linked to Banksy or PCOL, this is no longer the case. This would mean that the application was filed at the point of no return and PCOL would be unable to link the work to the undertaking of origin.

This stance contrasts with our usual expectations — if an artist or illustrator is still living, or recently deceased, you’d only expect reproductions of their work to be available for purchase through authorised channels. If we use the example of a band with a distinctive logo, this could well be the subject of both copyright and trade mark protection. We would probably expect a T-shirt sporting the Rolling Stones’ logo to be either authorised or counterfeit and nothing in-between. More interesting would be a T-shirt bearing an album cover — instinctively, would we look to copyright or passing-off protection first, rather than looking to find a trade mark registration?

This takes us back to the Arsenal Football Club v Reed decision et al, and the question of the essential function of a trade mark. At one time, we probably would’ve held the fairly simplistic view that the trade mark was the sewn-in label and swing tag of the T-shirt, but not the decorative feature on the front. However, as the importance of logos and statement tees grows in public consciousness, the lines begin to blur. If we expand the meaning of the essential function of a trade mark beyond guaranteeing the origin of goods or services to other functions including the quality of goods as well as communication, investment and/or advertising, it’s clear that what’s shown on the front of a T-shirt may become more than mere decoration. Since today we can protect patterns as trade marks (even though these might also attract copyright and design protection), is an artistic work not simply another version of this? Do we need to examine complex artworks more thoroughly to understand whether they’ve acquired sufficient distinctiveness to function as a trade mark and haven’t become generic or adopted too freely in the public domain more closely at the point of filing?

What next for Banksy?

Alleging that a trade mark has been filed in bad faith is a serious allegation which needs strong evidence to back it up. There’s no need to declare an intention to use a mark in the EU, which can arise in other jurisdictions, so it seems unlikely that an invalidation action would succeed on this basis.

The registration at issue was registered on 28 August 2014 and so was open to having a non-use cancellation action filed, as from 28 August 2019. FCB has referenced this lack of true intention to use the mark as effecting PCOL’s corresponding US filings (based on home use and registration) and there may be further basis for an attack there (although opinions seem to vary on the extent of use needed in the Applicant’s domestic market).

It’s difficult to see what bearing this has on the allegation against the EU registration. FCB does raise a number of thought-provoking points in its invalidation action and some interesting jurisprudence may well emerge if Brexit fails to curtail some of the discussion, given the number of UK cases referenced under the first head (though having said this, some of the decisions relied upon were subject to a reference to the EU seeking clarification on certain points, with guidance being sent back to the UK courts for determination of the facts).

Interesting jurisprudence aside, you may be forgiven for wondering why, once the Brexit extension was granted and the non-use cancellation date popped up before the end of that next extension, a non-use claim wasn’t brought at that point — unless, perhaps, the Italian action gave PCOL a fright. If the contention that PCOL wasn’t policing, licensing or using the image as at August 2019 remained correct, there probably would have been a simpler conclusion at that stage. Certainly, Banksy’s reluctance at setting-up shop, and apparently doing so for a limited duration, wouldn’t necessarily have deflected a non-use claim — given the need for genuine use and not simply token use to keep a registration live (this is aside from whether he’s even using ‘flower bomber’ in a trade mark sense!).

I’ll be keeping a close eye on this case as it develops and look to explain more about what’s happening as things progress.