The Federal Circuit’s recent decision in Idenix Pharmaceutical v. Gilead Sciences (October 2019) demonstrates the difficulty of adequately supporting broad pharmaceutical claims and provides a potential roadmap to invalidity for overbroad claims. The case cautions against reliance on claims covering millions or even many thousands of compounds and is a reminder that written description and enablement analyses may help clear a path over broad pharmaceutical claims.

The claim discussed in the case covers a method of treatment using a nucleoside and literally covers millions or even billions of compounds. Claim 1 reads:

1. A method for the treatment of a hepatitis C virus infection, comprising administering an effective amount of a purine or pyrimidine β-D-2′-methyl-ribofuranosyl nucleoside or a phosphate thereof, or a pharmaceutically acceptable salt or ester thereof.

An example of one such nucleoside is shown below.

Gilead’s allegedly infringing treatment relies on a nucleoside with a fluorine (F) at the 2’ down position (highlighted in yellow above), rather than the hydroxyl group (OH) shown.

The Federal Circuit noted the claim allowed for “nearly any imaginable substituent” at the 2’ down position. Even with the functional limitation that the nucleoside must be effective to treat hepatitis C (“HCV”) and accepting that a person of skill in the art would focus on a smaller set of candidate compounds, the district court determined the number of compounds in the millions or at least many thousands.

Considering enablement the court said the “key enablement question is whether a person of ordinary skill in the art would know, without undue experimentation, which 2'-methyl-up nucleosides would be effective for treating HCV.” The court concluded that the POSA would not know which nucleosides would be effective. This chart briefly summarizes the court’s analysis under the In re Wands factors: 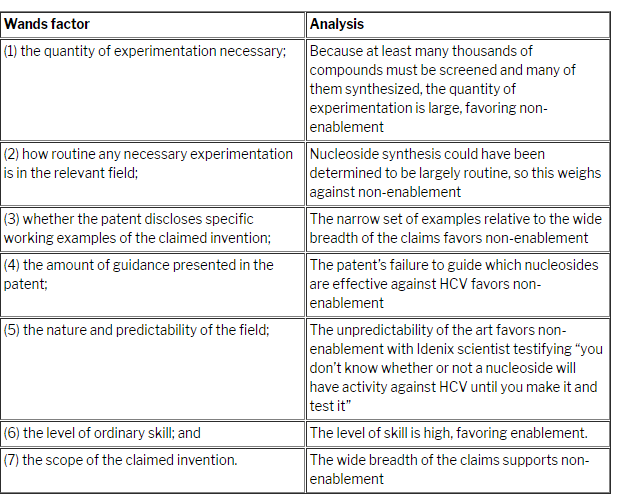 The Federal Circuit’s holding of non-enablement was largely driven by the number of compounds claimed relative to the limited number of examples and the need to screen each of the compounds for effectiveness. The court held the immense breadth of screening amounts to undue experimentation, even if the synthesis and screening steps themselves were largely routine.

The Federal Circuit also held the patent invalid for lack of written description finding no suitable blaze marks to direct a person of skill in the art to the specific nucleosides effective to treat HCV, stating “[t]he ’597 patent provides adequate written description for the compounds within its formulas. The specification, however, provides no method of distinguishing effective from ineffective compounds…” The court found the offered working examples, formulas, data, synthesis routes and target to lack an explanation as to what makes the compounds effective. The Federal Circuit also noted the lack of any disclosure of the infringing compound with fluorine at the 2’-down position.

Whenever possible provide specific, fully supported claims with working examples to survive enablement and written description challenges. Understand that as the number of claimed compounds exceeds the working examples, the risk of validity issues rises. Provide as many examples as possible. Consider developments in screening and testing, for instance the use of computer modeling and simulations to test compounds and provide support for effectiveness, for instance where laboratory testing is not possible. Include narrow claims to reduce risk, for instance in dependent form. Layered claims with varying levels of breadth and support in the specification or groupings of variance around specific parts of the compound can also be a useful strategy. Consider explaining what makes the compounds effective, for instance, identifying a common active moiety. While there is a recognizable difficulty in meeting the goal of broad support early in the drug discovery process, staying aware of the risks can help achieve patent protection commensurate with the innovative contributions identified by the inventors.

When analyzing granted patents or pending applications for freedom to operate and clearance purposes, consider that, like all broad claims, pharmaceutical claims may be attacked for lack of support. A careful analysis considering the issues discussed here and in the court’s decision may help to identify a clear path over broad patent claims.