On July 8, 2019, NBA player Giannis Antetokounmpo filed suit in the Southern District of New York for trademark infringement and counterfeiting of his GREEK FREAK trademarks in connection with clothing bearing his likeness. Antetokounmpo plays for the Milwaukee Bucks and was recently voted the NBA’s 2019 MVP. He is a household name to basketball fans and has adopted the nickname “GREEK FREAK,” an homage to Antetokounmpo’s home country of Greece.

To Antetokounmpo, GREAK FREAK is more than just a nickname; it is a trademark for which he owns a United States trademark registration. The GREEK FREAK registration covers apparel and backpacks, and provides Antetokounmpo with nationwide rights in that mark for those goods. Images of authorized products bearing the mark that he submitted to the Trademark Office are shown below:

The defendant is Jinder Bhogal (“Jin B”), owner of the website www.jinbartwear.com. Jin B sells fan gear, including t-shirts, bearing stylized portraits of sports icons. According to Jin B’s website, “[t]here is thought and meaning that go into each piece of art that we print . . . [the shirts] become a means for expression.” His line of portraits includes the 76ers’ Ben Simmons as a prince, the Heat’s Dwyane Wade in a white jacket with the title “One Last Dance,” and professional golfer Tiger Woods depicted as a tiger. The designs depicting these other sports figures are not mentioned in the complaint.

Since Antetokounmpo filed his lawsuit, several of these images have been removed from Jin B’s website and social media pages.

As alleged in the complaint, Jin B sold fan wear bearing Antetokounmpo’s likeness, which he advertised under the GREEK FREAK trademark. Those items included t-shirts showing the following rendering of Antetokounmpo: 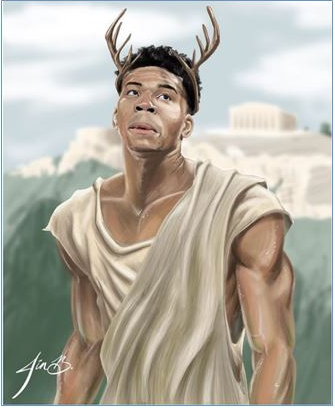 Jin B wrote of this portrait, “[it] shows [Antetokounmpo] in Ancient Greece, looking up to the heavens that sent him.” Although the portrait does not bear Antetokounmpo’s GREEK FREAK mark, the complaint shows screenshots of Jin B’s social media pages allegedly using GREEK FREAK in its advertisements and promotions: 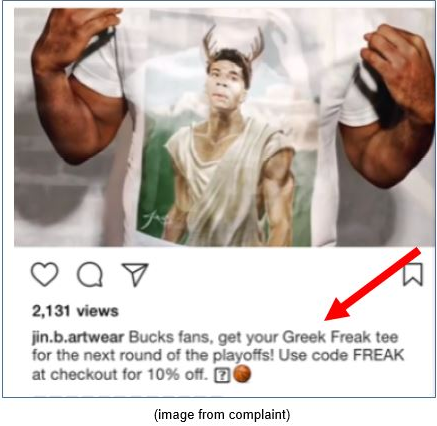 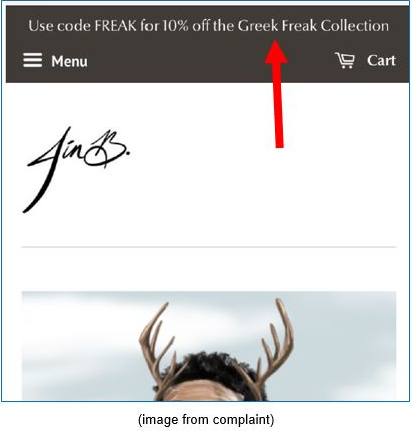 The complaint alleges that Antetokounmpo tried to resolve this dispute with a cease and desist letter (that can be accessed here), which accused Jin B of trademark infringement, dilution, and other common law and state law claims. The letter also included an allegation that Jin B violated Antetokounmpo’s right of publicity, which did not appear in the complaint.

Antetokounmpo’s complaint illustrates the value in registering a trademark that is associated with one’s identity. The GREEK FREAK trademark registration provides Antetokounmpo with a federal trademark right to assert against Jin B and also provides a presumption of nationwide rights in the mark, which is broader than the protection afforded by common law. The federal registration also allows Antetokounmpo to seek relief under the Lanham Act’s statutory damages provisions.

According to a TMZ Sports report on the suit, following the filing of the complaint Jin B contacted Antetokounmpo’s counsel to settle the dispute. While we are unlikely to learn the details of how this case resolves, Antetokounmpo’s complaint and enforcement of his GREEK FREAK trademark illustrates the advantages of strategically securing IP rights associated with one’s identity.