In December 2016, the government introduced the FinTech regulatory sandbox to reduce barriers to the development of new FinTech products in Australia. The sandbox allows eligible FinTech companies to test certain products or services for up to 12 months without an AFSL or ACL (subject to certain conditions).

The idea of a sandbox for FinTech firms was conceived by Britain’s former chief scientific adviser, Sir Mark Walport, who suggested the financial services industry would benefit from having something equivalent to the clinical trials of the health and pharmaceutical sectors.[2] FinTech sandboxes exist in jurisdictions around the world including the United Kingdom, Singapore, the United States, Russia, Indonesia, Jersey, Sierra Leone, Denmark, Canada, Hong Kong and South Korea.

To strike a balance between encouraging product testing and consumer protection, ASIC has attached a number of conditions to the sandbox arrangements. 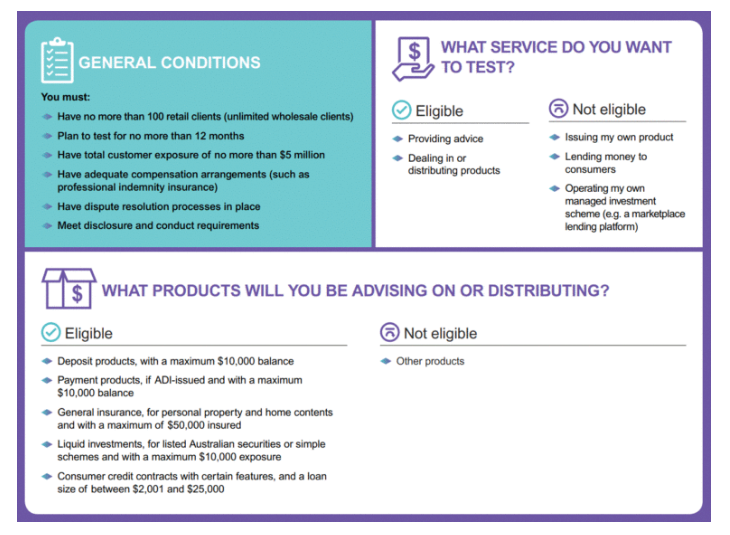 Providers utilising the sandbox must:

The changes proposed in the Bill

The new expansion of the sandbox rules was initially proposed by the Federal Government in the 2017-18 budget. The government’s intention behind the Bill is to “further cement Australia’s position as a leading FinTech hub in the Asia‑Pacific”.[3] The enhanced sandbox is intended to allow businesses to test matters such as the interest of the intended consumer segment, delivery approach, clarity of marketing and communications, pricing structures and the reliability of the underlying technology, as well as assisting businesses in ascertaining the requirements for licencing and reducing the burden in subsequently applying for a licence from ASIC.[4]

The new rules would:

ASIC has the power to cancel a provider’s licence exemption if it believes the provider has not met the conditions, is not of good fame or character, or has failed to act fairly, efficiently or honestly in providing financial or credit services.

An independent review of the new changes will be undertaken 12 months after commencement of the regulations.

Labor Senators have suggested there should be a test on entry into the sandbox to evaluate whether the products to be tested are genuinely innovative and provide a consumer benefit. Similar tests exist in Singapore and the United Kingdom. It remains to be seen whether amendments to this effect will be made by the Senate.

We welcome government measures designed to foster innovation and attract start-ups into Australian markets. We expect the expanded sandbox will assist FinTech start-ups to attract investors, as acceptance into the sandbox is likely to be viewed by both investors and consumers as a kind of “stamp of approval” by ASIC which will have the effect of increasing a provider’s credibility.

Given the number of other jurisdictions around the world implementing FinTech sandboxes, having a viable sandbox in Australia is also important for Australia’s competitive edge in this space.

(In parallel with these reforms to the FinTech sandbox , the Senate Select Committee on Financial Technology and Regulatory Technology recently released an Issues Paper regarding the role of FinTech and RegTech in Australia, which will report on the size and scope of the opportunity that FinTech presents for Australian consumers and business (among other issues). We commented on this Issues Paper here).

We would suggest a simple and straightforward entry test be applied to providers seeking the benefit of the sandbox as a measure to ensure provider’s bona fides, and ensure a basic level of consumer protection, while not sacrificing the advantages of the sandbox in testing potentially ground-breaking new financial products and services in a controlled environment.

We think that as long as the provider makes it well known to the consumer that he or she is investing in an experimental product or service, then it becomes a risk assessment and investment decision for the consumer to make.

We think that the regulator should monitor the sandbox fairly closely and evict providers which flout the rules (whether expressly or by the “spirit of the rules”) in order to provide confidence that the sandbox products are better placed for growth once they no longer qualify for sandbox exemptions and move out into the broader marketplace.