Weider keeps Morinaga’s “IN” mark out of Register

In Weider Global Nutrition, LLC v Morinaga & Co., Ltd [2021] SGIPOS 15, the Applicant sought a declaration of invalidity against the Proprietor’s registered “IN” logo in Singapore. The Applicant successfully relied on rights in relation to their own “IN” word mark but not their “IN” composite marks. The grounds based on passing off and bad faith were also not successful.

The Applicant sought to establish a likelihood of confusion in relation to their “IN” composite marks as well as their “IN” word mark. 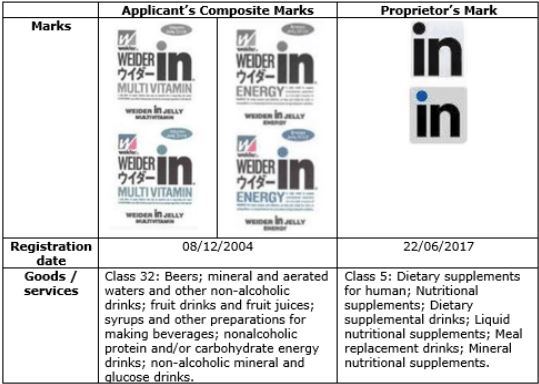 The Hearing Officer held that the marks were visually, aurally and conceptually dissimilar. This finding was based in large part due to the distinctiveness of the WEIDER element in the Composite Mark.

As she had concluded that the marks were dissimilar, there was no need to proceed with the enquiry as to whether the goods were similar or if there would be a likelihood of confusion.

The Applicant successfully argued that their Word Mark was similar to the Proprietor’s Mark, although the Hearing Officer was not persuaded by their submissions of a reputation in “IN” marks or of a family of “IN” marks. The Hearing Officer raised queries about the evidence tendered by the Applicant, especially with regard to the dates of the evidence and the use of “IN” with the distinctive word “WEIDER”.

As for the goods, the Hearing Officer held that certain claims did overlap and could be regarded as being in competition despite the different classes. For example, she noted that the Applicant’s “non-alcoholic protein and/or carbohydrate energy drinks” have similar uses to “nutritional supplements” and “dietary supplemental drinks” under the Proprietor’s Mark.

In view of the above, the Applicant succeeded in establishing a likelihood of confusion based on the Word Mark but not the Composite Marks.

The Applicant also argued that registration of the Proprietor’s Mark was in conflict with the law of passing off. This required the Applicant to establish goodwill in Singapore, misrepresentation and damage.

Although the Hearing Officer had earlier considered the Word Mark as being similar to the Proprietor’s Mark, the evidence did not clearly show that consumers associated the Word Mark with the Applicant’s goodwill in Singapore.

The Hearing Officer reiterated that the Applicant’s evidence showed use of “IN” with other distinctive elements, especially the word “WEIDER”. Retailers and consumers appeared to refer to the Applicant’s goods by the name “WEIDER” rather than “IN”.

As the Applicant could not establish misrepresentation, the claim based on passing off was not successful.

Lastly, Applicant argued that the Proprietor’s Mark had been applied for in bad faith as the Proprietor was only ever a sub-licensee and not the owner of “IN” and “IN”-formative marks in Singapore.

Emphasizing that the allegation of bad faith is a serious one, the Hearing Officer held that the evidence did not support these allegations and that the Applicant had not satisfied the requisite standard of proof. In particular, she raised queries as to why the Applicant did not procure a statement from the licensor (and the Applicant’s associate) on the ownership of the marks.

This decision highlights the benefit of registering the various representations of a mark in use. A combination of word mark and composite mark/device mark protection is usually advisable.

However, brand owners should be mindful about using their marks in a form that is consistent with what they have registered, and additionally keeping records of such use. Otherwise, this may compromise not only the maintenance of their registrations but also their enforcement strategies. With regard to the latter, the evidence should also show use that pre-dates the filing date of a counter-party’s mark.