President Donald Trump announced via Twitter that his administration will delay until October 15, 2019, its increase in Section 301 tariffs from 25 percent to 30 percent on products from China appearing on Tranches/Lists 1-3. The president and the Office of the U.S. Trade Representative (USTR) had previously indicated that the 5 percent increase would take effect October 1, 2019. (See Trump and Trade Updates of August 26, 2019 and September 3, 2019.) 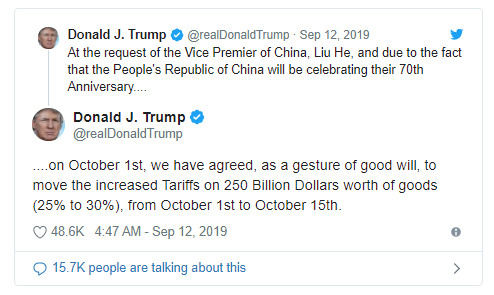 According to the president, this postponement was made in response to both a request from Vice Premier Liu He and to the scheduling of the original tariff increase start date on October 1, which is a national holiday in China celebrating the founding of the People’s Republic of China. It is expected that the USTR will formally announce this delay with a Federal Register notice soon. Trade negotiations between the United States and China are scheduled to resume in the next several weeks.