Like many traditional bank CEOs, HSBC Canada president and CEO Sandra Stuart got to the top the old-fashioned way — working her way up, starting as a teller in 1981. And her climb through the ranks reflected her skills and ambition.

But as the only woman CEO at a major Canadian bank, her achievement is also a testament to the pro-diversity culture at HSBC.

In 2015, the year Stuart became CEO, HSBC won the Governance Professionals of Canada Excellence in Governance Award for “Best Practices to Enhance Boardroom Diversity.” Today, 10 of the bank’s 16 highest-ranking executives and four of the nine directors on its board are women. No other major Canadian bank has joined HSBC in naming a female CEO. But all have been similarly recognized for their focus on gender diversity. In 2018, RBC — where Kathleen Taylor has been chair of the board since 2014 — won the same Governance Professionals of Canada award. That year, too, Bank of Montreal placed in the top-25 on the Thomson Reuters Global Diversity & Inclusion Index. In 2019, National Bank of Canada and TD Bank were named alongside HSBC and RBC as Canada’s Best Diversity Employers, while CIBC CEO Victor Dodig and Laurentian Bank director of mining and investment banking, Angelina Mehta, represented the banking industry on the advisory board of the 30% Club Canada. “Across most governance indicators, all of the banks are leaders,” says Camilla Sutton, president and CEO of Women in Capital Markets, an industry association created to advance gender diversity in Canada’s financial industry. The same holds true for the country’s largest insurers, such as Manulife Financial Corp., where Gail Cook-Bennett was board chair from 2008 to 2013.

“It’s a combination of being very large financial players and having the resources to do it; being federally regulated, which has held them to a higher standard; and, once they really got out in front, they’ve continued to move ahead of the pack.”

Given this track record, one might assume that the entire financial services sector is the standard bearer of best practices in diversity. However, that’s not the case. For every major bank that’s in the lead, there are many more small asset managers or investment banks with a “really different story,” says Sutton.

An op-ed that Sutton coauthored in early 2019 with Laura McGee, CEO of Diversio, a data analytics firm specializing in corporate culture, attributed that “story” to business priorities that discount gender diversity and “internal corporate culture [that] is often filled with bias and systemic barriers that work against women.” A 2018 study of North America’s financial services industry by McKinsey & Co. found evidence that supports their conclusions. Specifically, a 24% gap between the rates of first promotions for women and men — a disparity that occurred despite the two groups asking for promotions at comparable rates.

The same study also found that among entry-level employees, men are more likely than women to have senior leaders as advocates providing advancement advice and identifying opportunities — a key factor in promotion and career progression.

For the sector as a whole, women made up 21% of executive officers in 2019 (mid-year results, based on 588 companies that disclosed). That’s slightly higher than the overall average of 17% for all TSX-listed companies and 19% at S&P/TSX 60 companies but trailed four of the 12 other sectors tabulated. On a per company basis, the number of women executive officers in the financial services industry in 2019 was 2.52, midway between the average of 1.73 for all TSX-listed companies and 3.15 for S&P/TSX 60 companies.

Breakdown of number and percentages of women executive officers in 2019 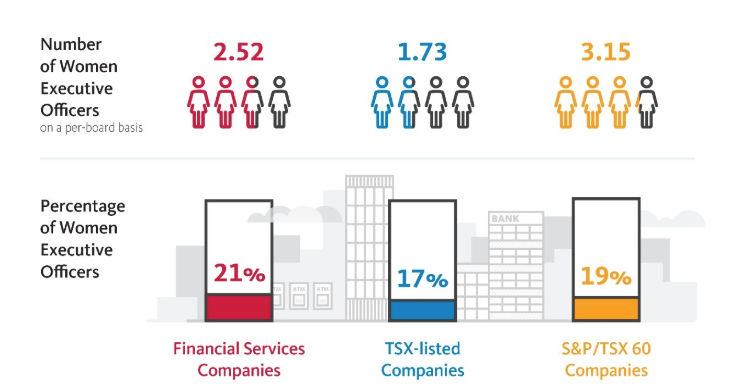 However, when Osler isolated data for the 10 largest financial institutions (eight banks and two life insurers), a very different picture emerged. Among those firms, the average percentage of women executive officers was 26.5%, a higher percentage than in any other sector. Per company, there was an average of 5.44 women executive officers, more than twice the average for the sector as a whole.

Looking at women’s representation on financial services sector boards, the spread is even more pronounced. Overall, Osler’s data (mid-year 2019) showed that 20% of directors in the sector were women, compared to 17% for TSX-listed firms overall and 29% on S&P/TSX 60 company boards. The number of women directors per board, meanwhile, was 2.19 compared to 1.44 for TSX-listed companies overall (657 companies disclosed) and 3.34 for S&P/TSX 60 companies (53 disclosed).

Breakdown of number and percentages of women directors in 2019

Just as averages obscure the “good news, bad news” aspects of this sector’s performance in 2019, so does a look at trends in the data since Osler started compiling this information.

While those rates of change indicate a genuine lack of overall progress, they reveal little about what has been happening at the large financial institutions. Averaging is part of the reason; another is that the banks, being early adopters, made big strides prior to the study period.

Data compiled by the Canadian Board Diversity Council (CBDC), focusing on FP500 companies in the financial services and insurance sectors, more closely reflects the figures seen in Osler’s top-10 breakout and the S&P/TSX 60. It shows significantly higher overall percentages of women among both executive officers and board directors — a clear sign that the larger institutions are making bigger strides on diversity, particularly on their boards.

According to the CBDC, one-third of directors (33.1%) on boards at FP500 companies in finance and insurance in 2018 were women, up from 27% in 2015. The percentage of women executives in 2018 was somewhat lower, at 26.3%. Rather than showing any increase over time, this figure is actual slightly lower than the 28.5% the CBDC reported in 2016 (the first year it began tracking executive data).

Given the sector breakdown just described, it’s fair to say that all of the major Canadian banks and life insurance companies demonstrate best practices on diversity. Tellingly, all 10 of those companies have adopted formal targets for women directors on their boards and 80% have targets for women executive officers.

Among individual companies, Osler’s research identified a number of programs worthy of note. These include:

With its mandate to advance gender diversity in the entire sector, Women in Capital Markets is focused on helping many of the smaller firms which continue to lag the larger institutions in this regard. To this end, in 2019 it partnered with Diversio to collect data from companies across the industry to identify specific cultural barriers. With that, it aims to apply predictive analytics to recommend solutions to eliminate bias and other systemic barriers to women.

“The idea is that we look at culture and then try to build action plans around how to drive broader change with the financial services culture that can accelerate diversity,” says Sutton.

Research like the McKinsey study cited above indicates that women face similar challenges in the financial services sector outside of Canada. But the global nature of the industry also means that many of the corporate diversity programs seen in Canada are also found elsewhere.

One UK government measure warrants highlighting. In 2017, the Treasury, the government department responsible for developing and executing public finance and economic policies, established a Women in Finance Charter. It has 123 signatories — spanning banks, investment funds, insurance and other professional services firms — that have pledged to achieve an average target of placing women in 38% of senior roles. In the most recent progress report, published earlier this year, 45% of signatories had met their targets and 42% were “on track” to do so.

The lowest-performing groups among charter members are investment banks and fund managers — a result that is consistent with the Canadian experience and one that underscores how culture is such a critical factor in driving change.

If there is a positive takeaway, it’s that measures to address culture can bring change quite quickly. Says Sutton: “Firms that are doing things like gender pay audits, that have targets in place, that have performance and promotions systems that are seen as fair by their workforce are typically doing much, much better in terms of diversity.”