The Situation: Cameroon has announced a bidding process pertaining to licensing rights for oil and gas blocks located in the Rio del Rey and Douala/Kribi-Campo Basins.

The Development: The oil and gas rights include a number of significant incentives designed to attract the interest of international oil and gas companies.

On January 10, 2018, the Société Nationale des Hydrocarbures ("SNH") launched a fresh licensing round for eight blocks through which international oil and gas companies were invited to submit bids in accordance with new competitive terms of reference ("2018 Licensing Round").

The 2018 Licensing Round is bolstered with improved commercial terms relating to eight offshore blocks: three in the hydrocarbon-rich Rio del Rey ("RDR") Basin and five in the prospective Douala/Kribi-Campo ("DKC") Basin.

Arbitration in Paris under ICSID rules and in French and/or English language. 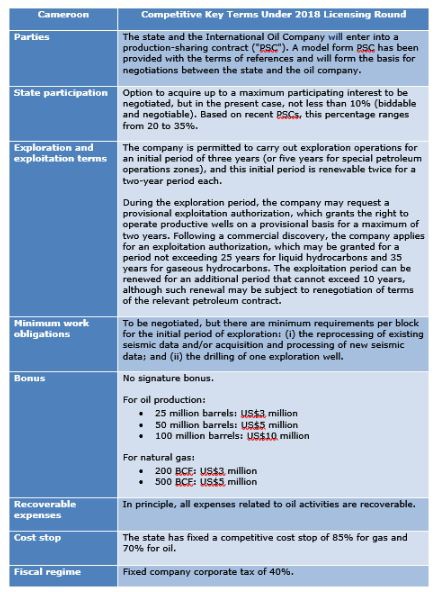 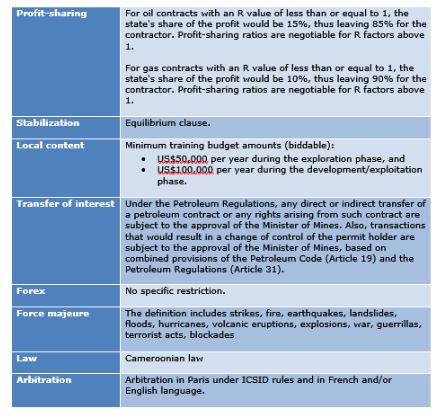 The bid should be submitted by an oil company, or by a group of commercial companies amongst which, at least one is an oil company with relevant financial and technical capabilities demonstrated by the documentation required under the terms of reference.

The Cameroonian upstream sector is governed primarily by Law No. 99/013 of December 22, 1999, instituting the Petroleum Code, and Decree No. 2000/465 of June 30, 2000, setting forth the terms of application for the Petroleum Code. The key institutions involved in regulating the upstream oil and gas sector are the government (through the Minister of Mines) and the SNH. The Minister of Mines is responsible for granting all applicable licenses and authorizations in the sector, regulating petroleum operations, and granting consents for the transfer of licenses or authorizations. The SNH was created in 1980 and is the state body in charge of developing and monitoring petroleum activities for the entire Cameroonian territory, managing the Cameroonian state's interests in the oil sector and controlling the sale of locally produced crude oil in the domestic and international markets.

Cameroon is signatory to the Extractive Industries Transparency Initiative ("EITI") and has set up a multi-stakeholder group, the "Follow-Up Committee," under the leadership of the Minister of Finances, with the responsibility, implementation, and follow-up of the EITI. Cameroon is also a member of the African Petroleum Producers Association.