Digital Services Tax: Overview of the progress of implementation by EU Member States

For several years there have been efforts at international, EU and national levels to reform taxation to ensure that profits are taxed where economic value is created. Most recently this work has centred on the digital economy but it has its roots in the scrutiny of tax planning strategies used by multinationals that operate across multiple jurisdictions.

At an international level, work has revolved around the Organisation for Economic Co-operation and Development (OECD) which in 2013 launched its Base Erosion and Profit Shifting (BEPS) Action Plan with a process aimed at countering certain strategies used by multinationals to reduce their tax burden. On 9th October 2019 the OECD published its 'unified approach' for public consultation, with the aim of arriving at a consensus, so as to develop a solution for its final report to the G20 in 2020.

At EU level, the European Commission has also been trying to address the tax strategies of multinationals through a proposed harmonised set of rules to tax companies rather than leaving it to individual EU Member States.

Despite attempts to reach agreement, EU Member States have been unable to reach a compromise on its own proposals and the European Commission has since conceded that it will wait for progress at OECD level and revisit its proposals in 2020 if no progress is made.

This deadlock has led several EU Member States to introduce their own initiatives for national taxes on digital companies which would include ‘sunset clauses’ and expire if an agreement is reached at international or EU level. Such initiatives may, potentially, lead to double taxation and differing views of the transactions covered and have also increased tensions at the global political level (e.g. between the USA and France).

There have been concrete recent developments in the tax systems of Austria, Belgium, Czech Republic, France, Hungary, Italy, Poland, Slovenia, Spain and UK. All these countries have proposed, announced or already implemented some form of a digital services tax. Our analysis is aimed at providing an overview of the measures that some key Member States are introducing. 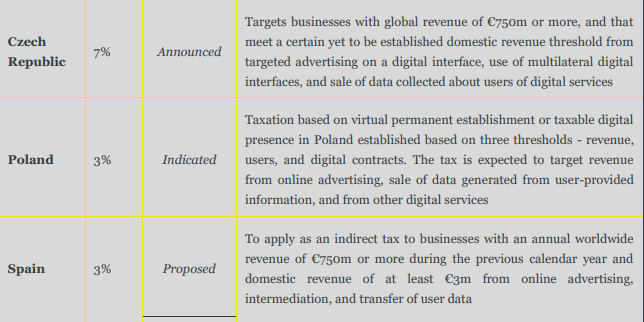 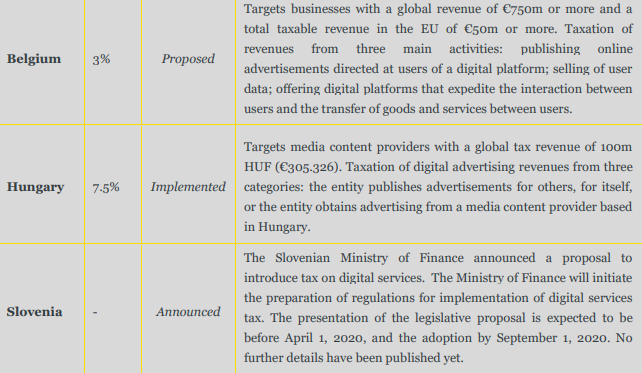