As the old saying goes, “If you mess with the bull, you get the horns.” And if you mess with the Grumpy Cat, or more specifically, if you exceed the scope of the IP license to use Grumpy Cat’s image and trademarks as negotiated by the attorneys for the cat’s rights holding entity, it may cost you a bunch of scratch.

You may not know Grumpy Cat’s real name (it’s “Tardar Sauce”), but you know her face – a face that launched a thousand memes and was in every email from your aunt in 2014: 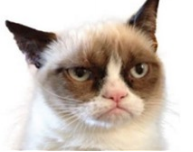 On January 22, a California jury returned a verdict in favor of the cat and her rights enforcing arm, Grumpy Cat Limited, and against Grenade Beverage, in the cat’s copyright and trademark infringement lawsuit.This cat fight started amicably, when Grenade Beverage licensed the cat’s image for “Grumpy Cat Grumppuccino,” an apparently real coffee beverage.

According to the cat’s complaint, any further expansion of the license required prior approval from Grumpy Cat Limited. In an email to the cat’s lawyers, Grenade Beverage later sought to use Grumpy Cat on a line of “Grumpy Cat Roasted Coffee.”

While simple electronic communications like emails in some instances can act as contracts, in this case, Grumpy Cat’s attorneys expressly denied the request to use the feline’s likeness on a second product.

But in a familiar tail – or, rather, tale – Grenade Beverage went ahead with its Grumpy Cat Roasted Coffee launch anyway. In response, the cat’s lawyers pushed some stuff off their desk for no reason, sharpened their claws, and brought the infringement suit.

While Grumpy Cat likely responded to the win with her trademarked scowl, The Wrap reported that the cat’s attorney, Dave Jonelis, commented on behalf of the famous frowning feline, “It’s the first verdict ever rendered in favor of a viral meme. Memes have rights too.”