Diversity in International Arbitration: A call to action

The 8th March is International Women's Day - a global day celebrating the social, economic, cultural and political achievements of women whilst at the same time marking a call to action to accelerate gender equality.

IWD’s 2020 campaign theme is #EachforEqual - a theme drawn from a notion of “Collective Individualism”.

With this mind, this blog looks at gender diversity in international arbitration and the extent to which “Collective Individualism” has driven, and continues to drive, change in order to generate gender equality in this sector.

The results of our 2017 Annual Arbitration Survey Diversity on Arbitral Tribunals: Are we getting there? confirmed a clear wish to improve diversity, both in respect of gender and ethnicity, and that everyone involved in the arbitration process has a part to play.

Are we getting there?

Three years on, it’s clear that a lot has been done to promote gender diversity in international arbitration – but it’s also clear that more needs to be done if we are to achieve the goal of gender equality in arbitration.

Sitting at the heart of the drive for diversity in arbitration is the Equal Representation in Arbitration Pledge.

In 2015, in recognition of the under-representation of women on international arbitral tribunals, members of the arbitration community drew up a pledge to take action. The Pledge seeks to increase, on an equal opportunity basis, the number of women appointed as arbitrators, in order to achieve a fair representation as soon practically possible, and with the ultimate goal of full parity.

The Pledge establishes concrete and actionable steps that the arbitration community can take towards achieving these general objectives and the ultimate goal of full parity. Signatories to The Pledge commit to taking steps to ensure that, wherever possible: 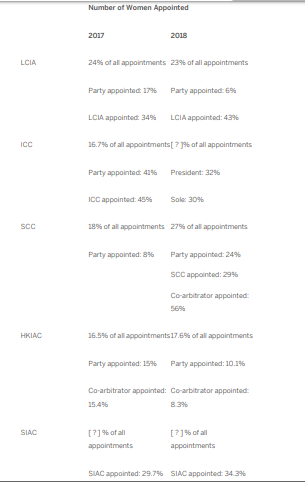 The publication of statistics is definitely a step in the right direction, providing some meaningful data from which the arbitral community can measure the progress that is being made to improve gender diversity in arbitral tribunals.

However, the available statistics also demonstrate that there is some way to go in improving the representation of women on arbitral tribunals – let alone to achieve the ultimate goal of full parity.

The overall percentage of women appointed as arbitrators remains low. The LCIA and SCC led the way in 2018 with figures of 23% and 27% respectively and that percentage drops to 17.6% for the HKIAC.

Also, the available data is not as clear as it could be on the number of woman appointed in any given year.

Take, for example, the ICC, which disclosed statistics on the gender balance of ICC tribunals for the first time in 2016 as part of an increased drive for transparency. In 2017, the ICC reported that of 1,488 arbitrators nominated or appointed, 249 were women compared with 209 of 1,411 arbitrators in 2016. This represented an increase in the percentage of women arbitrators appointed by the parties, co-arbitrators or the ICC Court from 14.8% in 2016 to 16.7% in 2017.

SIAC adopts a similar approach. The SIAC statistics tell you what percentage of the women appointed as arbitrators in a given year were appointed by SIAC – but don’t provide the underlying data on the number of women appointed.

The ICC does publish a chart on its web-site identifying all arbitrators appointed in cases registered after 1 January 2016. However, the chart is published in a format that doesn’t offer any search tools – making it extremely difficult to extract data on the number of woman arbitrators appointed over any particular period.

Overall, the statistics indicate that the arbitral community as a whole still has some way to go in encouraging the nomination and appointment of female arbitrators and highlight the fact that we have a collective responsibility to promote gender diversity.

Which brings me back to The Pledge and to the Equal Representation in Arbitration Pledge award, now in its second year, which was created to recognise a person or organisation for outstanding commitment to gender diversity in the field of international arbitration.

JAMS for the introduction of an optional diversity and inclusion rider to its standard arbitration clauses and the appointment of a diversity programme manager.

Lucy Greenwood for her continued efforts to collate data and report on female arbitrator appointment statistics.

AmCham Peru for appointing a majority of female court members.

Katherine Simpson who drew attention to the lack of diversity in the EU’s proposed list of CETA arbitrators and provided CETA signatories with a list of 70 experienced women trade experts for inclusion in the CETA List of Arbitrators.

The International Commercial Arbitration Court (ICAC) at the Ukrainian Chamber of Commerce and Industry where all three Vice Presidents are female.

Voting is open now at https://www.surveymonkey.co.uk/r/GARawards2020