The provisions of the Taxation Administration Act provide that the directors of companies are required to ensure that their company complies with obligations to:

In the event the above obligations are not met, the legislation pierces the corporate veil and holds directors of companies personally liable for these debts.

This article provides an update as to the ATO’s increased powers to hold directors liable which came into effect in June 2012.

We are currently seeing the ATO use these powers more frequently. Furthermore, the Government has recently concluded consultations on changes to the legislation to make directors personally liable for unremitted GST. Submissions from the consultation process have not yet been released.

What is a Director Penalty Notice (DPN)?

A DPN is a formal notice issued by the Deputy Commissioner of Taxation to the director(s) of a company to:

DPNs will be sent to the director’s place of residence or business address as recorded on ASIC’s database. If the address on ASIC’s record is not correct, the director is still deemed to have received the notice. As such, directors should ensure that ASIC’s records are kept up to date to avoid missing a notice and the opportunity to address the same. The 21 day period commences on the day the notice is mailed, not when it is received. Directors should consider keeping the envelope in which the DPN is received as evidence of the date on which the DPN was mailed.

When can a DPN be issued?

The ATO is able to issue a DPN as soon as the due date for lodgement and payment has passed. The penalty equals the unpaid liability and is due on the same date as the company was supposed to pay the taxation debt.

How to address a DPN

Each DPN will need to be carefully assessed and addressed in the appropriate way. The following flow chart may assist in that assessment. 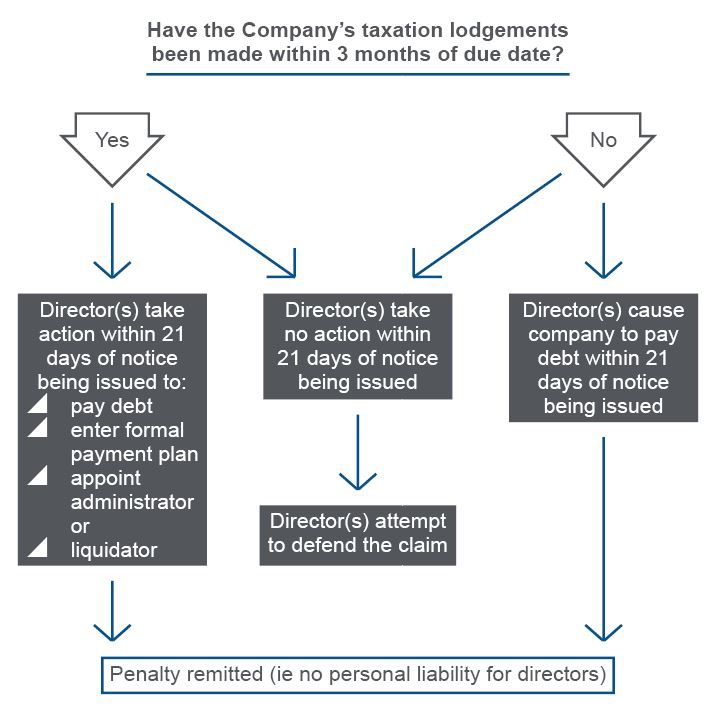 In the event that the debt is not paid and the debt cannot be remitted, the ATO is likely to issue proceedings to recover the debt from the director. Proceedings can only be issued after the expiration of 21 days following the issuing of the DPN and if the company has not entered into a compliant payment arrangement with the ATO company in respect of the debt.

If a director is on the receiving end of proceedings by the ATO seeking to enforce the DPN, the director may wish to defend the DPN. The grounds on which a DPN may be defended are:

What should a director do upon receipt of a DPN?

Upon receipt of a DPN directors need to act quickly and should obtain immediate legal advice and / or accounting advice from an insolvency practitioner to understand and assess what options are available to them. Given the strict time limits which apply in respect of the DPN regime, failure to act promptly upon receipt of a DPN notice could prevent a director from successfully having a DPN penalty remitted.

But directors can’t just wait for the DPN before acting…

It is also critical that directors keep their lodgements in respect of PAYG withholding and superannuation guarantee statements up-to-date. Failure to do so will be the difference between whether or not the director can take steps following receipt of a DPN to cause some or all of the penalty to be remitted.

If directors are facing difficulties with payment of taxation liabilities, they should be encouraged to seek advice sooner rather than later to maximise their prospects of being able to successfully avoid or, where that is not possible, defend DPN proceedings.