A few weeks ago, our team wrote about the latest charge filing statistics published by the EEOC. The agency posts records of charges going back to 1997 – 20 years of data. Since a picture speaks a thousand words, here is the latest information relative to the total number of charges filed with the agency since 1997: 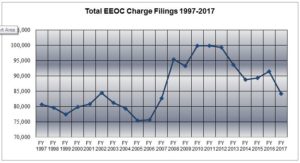 Stepping back and putting the new numbers into their relative place, a few things are made clear. The overall rise and fall of charges over time tends to ebb and flow with the general nature of the economy. When a recession hits, the number of charges increase. We can see that from 1999 to 2002 during the dot com bubble, and a much larger increase during the 2008 recession. Given the rise of the stock market in the last year and general positive economic mood, the reduction in the number of charges reported from 2016-2017 largely makes sense. However, at the same time, the country is seeing an extremely polarized political climate and heightened awareness of discrimination and harassment. With that background, it is unlikely that the number will continue to plummet, and doubtful it will go back to the floor seen in 2005-2006. Time will tell.

With respect to the specific types of charges, the trends have not changed dramatically. Retaliation remains the most frequently filed claim – a position it has occupied unchallenged since 2009. The next most commonly asserted claims have held their positions: race claims being the most commonly filed discrimination claim, followed by disability, sex, and then age: 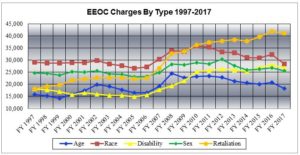 Once again, the numbers show that while employers obviously must remain vigilant with respect to preventing all forms of discrimination and harassment in the workplace, they should be particularly careful with respect to addressing and curbing retaliation. Employers should make sure that they have mechanisms in place to report not only discrimination and harassment but also retaliation claims, and that they take appropriate steps to follow through on any such complaints.