The Securities and Futures Commission ("SFC") has on 5 December 2019 published its latest Quarterly Report, summarising the key developments from July to September 2019.

It is clear from the Quarterly Report that the SFC has continued to be active in its regulatory activities. Some highlights of the quarter included:

The table below, as provided in the Quarterly Report, details the number and the types of breaches that were noted during SFC’s on-site inspections. 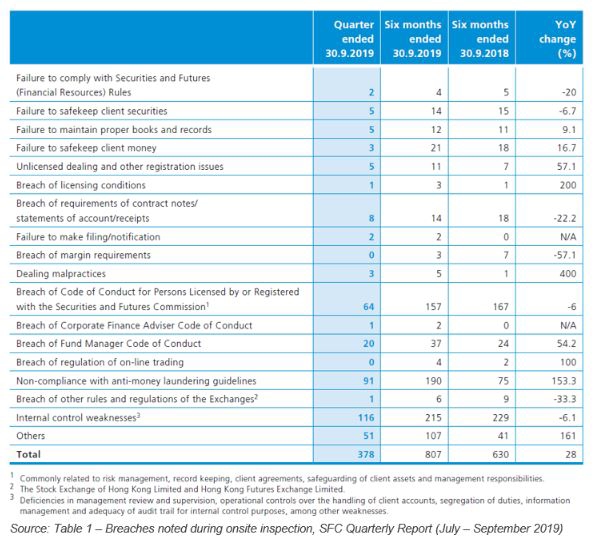 Out of the 106 on-site inspections that were carried out between July and September 2019, the SFC identified a total of 378 breaches. Almost one-third of the breaches relate to internal control weaknesses, making it the most prevalent type of breach found among licenced corporations. Internal control weaknesses cover but are not limited to deficiencies in management review and supervision, operational controls over the handling of client accounts, segregation rules, information management and adequacy of audit trail for internal control purposes.

Considering the various disciplinary decisions made by the SFC during the quarter, most of them also relate to internal control deficiencies. For instance, unauthorised transactions effected in clients’ accounts, failure to supervise account executives, ineffective segregation of duties and handling of client securities, and inadequate business operations and internal control practices which resulted in mishandling of client money and breaches of short selling requirements and telephone recording requirements under the Code of Conduct for Persons Licensed by or Registered with the Securities and Futures Commission (“Code of Conduct”).

We also see a significant increase in cases involving non-compliance with anti-money laundering guidelines, reflecting the SFC’s focus on this front. On 3 July 2019, the SFC made an announcement to ban Tim Leissner, former responsible officer of Goldman Sachs (Asia) L.L.C., from re-entering the industry for life following his conviction for conspiring to commit money laundering and violate the US Foreign Corrupt Practices Act. Licensed corporations should pay attention to, among other things, compliance with the latest version of the anti-money laundering guidelines published in November 2018.

Another key area of concern remains to be unauthorised tradings and breaches of the Code of Conduct.

The SFC has started 126 investigations in the six months ended 30 September 2019, amongst which 71 were started in the previous quarter. Beyond September 2019, we continue to see the SFC actively pursuing disciplinary actions and market misconduct proceedings. Statistics demonstrate that the SFC remains keen on its “front-loaded” regulatory approach.

This serves as a clear reminder to all licenced corporations and relevant persons of the importance to review their compliance practices and internal control systems procedures from time to time.

Licensed corporations should remain vigilant in ensuring such practices and procedures are implemented effectively and records of operation, supervision, compliance and trainings are properly kept in order to be in a better position to respond to inspections and potential investigations.