Stephen Thaler's latest attempt to obtain legal rights for artificial intelligence was struck down by The Review Board of the United States Copyright Office ("Board"). On February 14, 2022, the Board yet again denied registration for an image generated by Artificial Intelligence concluding that human authorship is required under U.S. copyright law.

For the last several years, Thaler has attempted to obtain legal protections for creations made by the AI Machine he calls DABUS, short for Device for the Autonomous Bootstrapping of Unified Sentience. DABUS is a type of creativity machine that generates art and inventions through a system of neural networks. Neural networks are meant to mimic the human thought process, allowing DABUS to connect various concepts and ideas and create outputs (such as inventions or artwork) similar to how a human would come up with new ideas.

Thaler's attempts have been met with varying success outside of the United States. In July 2021, for example, an Australian Federal Court held that AI-Generated inventions are patentable, granting a patent naming DABUS as its inventor. In the Australian Justice's words, "We are both created and create. Why cannot our own creations also create?" The next month, South Africa's patent office reached the same conclusion. These determinations run contrary to the UK Court of Appeal, the European Patent Office, and the United States Patent and Trademark Office ("USPTO") decisions requiring an inventor to be a natural person. Thaler currently has DABUS patents pending in Brazil, Canada, China, India, Israel, Japan, New Zealand, Korea, Saudi Arabia, Switzerland and Taiwan.

Copyright and AI in the United States 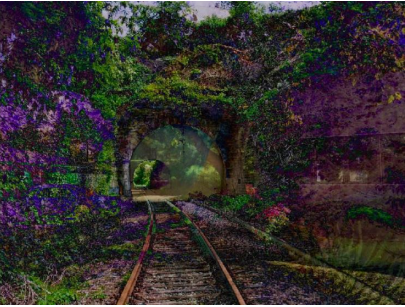 Thaler submitted the Work to the U.S. Copyright Office ("Office") in November 2018. He included a note stating that the work "was autonomously created by a computer algorithm running on a machine" and that he was "seeking to register this computer-generated work as a work-for-hire to the owner of the Creativity Machine." The Copyright Office refused to register the claim, finding it "lack[ed] the human authorship necessary to support a copyright claim."

In September 2019, Thaler requested a reconsideration, arguing that "the human authorship requirement is unconstitutional and unsupported by either statute or case law." The Office re-evaluated the work in light of Thaler's new claims. Again, it concluded that the Work "lacked the required human authorship necessary to sustain a copyright claim," because Thaler "provided no evidence on sufficient creative input or intervention by a human author in the Work." The Office also stated that it would not "abandon its longstanding interpretation of the Copyright Act, Supreme Court, and lower court judicial precedent that a work meets the legal and formal requirements of copyright protection only if it is created by a human author."

In May 2020, Thaler submitted a second request. Thaler asserted that copyright law already allowed "non-human entities to be authors under the work make for hire doctrine" and that the Office's rejection relied on "non-binding judicial opinions from the Gilded Age[.]" According to Board, the second request repeated "the same arguments from the First Request, largely advancing public policy arguments that the Office ’should’ register copyrights in machine-generated works because doing so would 'further the underlying goals of copyright law, including the constitutional rationale for copyright protection.’" Feb. 14, 2022, Board Decision, Correspondence ID 1-3ZPC6C3; SR # 1-7100387071 ("Feb. 14, 2022 Decision").

The Board again rejected Thaler's claim and concluding that "human authorship is a prerequisite to copyright protection."

The Board's Denial of Registration

The Copyright Act affords protection to "original works of authorship" that are fixed in a tangible expression. 17 U.S.C. § 102(a). The Board acknowledged that the scope of this protection is "very broad," but noted that it was not unlimited. Although no court has yet addressed whether artificial intelligence can be an author for copyright purposes, the Board saw no reason to depart from nearly 150 years of case law. Over time, the Supreme Court has interpreted the Copyright Act to extend only to "creations of human authors." Various lower courts have followed the Supreme Court's lead rejecting attempts to copyright works "authored" by "non-human spiritual beings," monkeys, "natural forces," or depicting "ideas, first expressed by nature" without additional artistic contribution.

The Board also looked to guidance provided by federal agencies. The National Commission on New Technological Use of Copyright Works ("CONTU") was created in the 1970s to study "the creation of new works by the application or intervention of [] automatic systems of machine reproductions." CONTU's conclusion echoes judicial decisions, determining that human authorship is required for copyright protection.

Similarly, the Copyright Office's publications dating back to 1966 mirror CONTU, mandating "for a work to be copyrightable it must owe its origin to a human being." For this reason, the Copyright Office identifies numerous "non-human" inventions such as automated computer translations, derivative sound recordings made by purely mechanical processes, performances by animals, machines or objects, machine-produced expression in visual art works, medical x-rays or imaging, and hypertext markup language generated by a website design program.

Finally, the Copyright Office looked to guidance provided in a 2020 USTO report seeking public comment on intellectual property issues raised by AI. The report noted that "the vast majority of commenters acknowledged that existing law does not permit a nonhuman to be an author [and] this should remain the law."

Considering these factors, the Board concluded that a non-human cannot be an author under existing copyright law.

The Board also rejected Thaler's argument that because the work for hire doctrine allows artificial persons such as companies to be authors, AI can be can also be an author. A work for hire is the result of a contract between parties that agree the work is for-hire. Thus, in order to qualify as a work for hire, Thaler's Creativity Machine would need the ability to enter into a legally binding contract. It cannot. Moreover, the work for hire doctrine only addresses the identity of the owner of the work, not whether it is protected by copyright. Therefore the Board declined to register the Work.

The Board's decision is not surprising. Existing copyright law does not allow for a wholly machinegenerated creation to qualify for copyright protection. Even still, the Board's decision left open several potential areas for further development. For example, because Thaler argued that the were no contributions by a human author, the Board did not address circumstances in which there is "human involvement in the creation of machine-generated works." Yet, this description applies to a significant number of works, as artists are increasingly using Generative Adversarial Networks (or "GANs") that can create entirely original outputs based on inputs selected by the artist.

To this end, there is also room for expanded protections if certain types of AI are given legal recognition. It is possible, for example, that the law could start to recognize certain types of AI, such as Thaler's Creativity Machine, as legal persons in the same manner as corporations. Recognizing AI as a legal person carries with it a host of repercussions, but at least for purposes of copyright it could allow for the protection in some circumstances.

For now, work generated without human intervention remains beyond the scope of copyright protections. This may change as artificial intelligence continues to inch closer to personhood, at least in the eyes of the law.