AEMO predicts generation shortfalls over the next 10 years which will affect the reliability of supply in the National Electricity Market (NEM).

To address this, the Energy Security Board (ESB) was tasked with creating a mechanism to assist in the maintenance of reliability1 in the NEM.

This resulted in the development of the Retailer Reliability Obligation (Obligation) which aims to ensure that there are no generation shortfalls in electricity supply in the long run - ensuring better consumer outcomes and a stronger, more reliable electricity system moving forward.

The Obligation aims to "incentivise retailers, on behalf of their customers, to support the reliability of the power system through their contracting and investment decisions".2

It has been designed to align with the following seven step process:

Broadly, the policy intentions of the Obligation are to be met by implementing legislative mechanisms that:

The National Electricity (South Australia) (Retailer Reliability Obligation) Amendment Act 2019 (SA) (NEL Amendment Act) was assented to on 23 May 2019 and is due to come into operation on a day to be fixed by proclamation.

The substantive amendments proposed relate to the AER's powers to enforce the Obligation and the broad details of the Obligation that need to be included in the National Electricity Rules (NER).

The ESB released its revised amendments to the NER relating to the Obligation on 7 May 2019. These amendments set out the bulk of the mechanics necessary to enact the Obligation and identifies the guidelines to be developed by AEMO and the AER to support the implementation of the Obligation going forward.

Steps 1 and 2: AEMO forecasting and updates

The new rules outline the information that must be included in the Electricity Statement of Opportunities3 (ESOO) released by AEMO.4 This information includes:

Relevant to registered participants will be the ability for AEMO to request information that it reasonably requires for the preparation of an ESOO. This is a broad provision that is only limited by the Reliability Forecast Guidelines, that are yet to be finalised.

AEMO will request that the AER releases a reliability instrument if it forecasts that there will be a material departure from the reliability standards in three years (T-3), triggering the Market Liquidity Obligation, discussed below.7

AEMO may once again request that the AER publish a reliability instrument one year out from a forecast material gap (T-1) if an expected material reliability gap remains, requiring entities to disclose their net contracting positions (discussed below).

The AER is entitled to reject an AEMO request and not publish a reliability instrument if it is not satisfied that a forecast reliability gap (Reliability Gap) will occur in the region identified by AEMO.

Liable entities will be required to comply with the Obligation, if triggered

A liable entity8 is:

The Obligation provides for certain:

to manage their own reliability requirements instead of a retailer/market customer as these customers may be able to manage the obligation (as it relates to their load) more efficiently than their retailers.

To manage their own reliability requirements, entities must apply to the AER and seek approval for a connection point.

Step 5: How does a liable entity respond to the Trigger?

If the AER makes a T-1 Reliability Instrument for a region, then liable entities must provide the AER with a report about their net contract position for the stated trading intervals during the Reliability Gap period.12

What constitutes a Qualifying Contract?

Under the proposed amendments to the NEL, qualifying contracts must be:

The proposed NEL amendments facilitate the NER dictating other forms of qualifying contracts. At this point in time, no additional criteria has been provided for in the NER.

That being said, a further enabling mechanism has been included in the NER that allows the AER to decide what is a qualifying contract through the Contracts and Firmness Guideline being developed by the AER ('firmness' is discussed below).

The only limitation on the types of contracts that the AER may prescribe in the Contracts and Firmness Guideline, is that the qualifying contracts must relate to the:

as required to meet energy requirements in the relevant regions.13

At this point in time, the ESB has decided to step away from the concept of "dispatchable" energy, instead opting for an approach that is more technology agnostic. The AER is due to release its final Contracts and Firmness Guideline on 31 December 2020.

These rules do not apply to self-generation or self-curtailment contracts.

Step 6 - What obligations do liable entities have under the regime?

A liable entity must ensure its net contract position submitted to the AER equates to the liable entity's share in the one-in-two year peak demand forecast for the relevant trading interval in which a material Reliability Gap exists.15

What is a net contract position and how does firmness affect it?

The net contract position for an entity is calculated by adjusting the megawatts of electricity under a liable entity's qualifying contracts by:

What is a firmness factor?

Firmness factors are, for the most part, to be determined by the AER in accordance with the Contracts and Firmness Guideline. However, a mechanism has also been included in the proposed rules to allow liable entities to calculate a firmness methodology for non-standard qualifying contracts approved by an Independent Auditor.

The AER, in determining firmness factors for common qualifying contracts, must have regard to firmness principles which are as follows:

Step 7 - What happens if all else fails? (PoLR)

If there is a gap at T-1 (as calculated after each liable entity has disclosed their net contract position), then AEMO will step in as the PoLR, procuring the relevant energy as necessary to fill the reliability gap.17

The costs associated with the PoLR regime will be payable by liable entities by reference to:

Liability for the PoLR costs associated with non-compliance are capped at $100 million.

Two distinct groups of entities will be obligated to comply with the Market Liquidity Obligations during a T-3 and T-1 Reliability instrument, these being (for a region, in a quarter):

Compliance requires these obligated entities to simultaneously buy and sell on an MLO Exchange (being a trading facility approved by the AER), MLO products relating to the entirety of the relevant forecast Reliability Gap period, such that, in the trading period, an aggregate quantity of MLO products (equal to or greater than the minimum block) are either:

Obligated entities must perform these requirements for at least the target trading period, which in respect of a month in which a T-3 reliability instrument is active means:

An MLO Product (published on an AER register) is an electricity derivative21 (or other instrument approved by the AER) that: 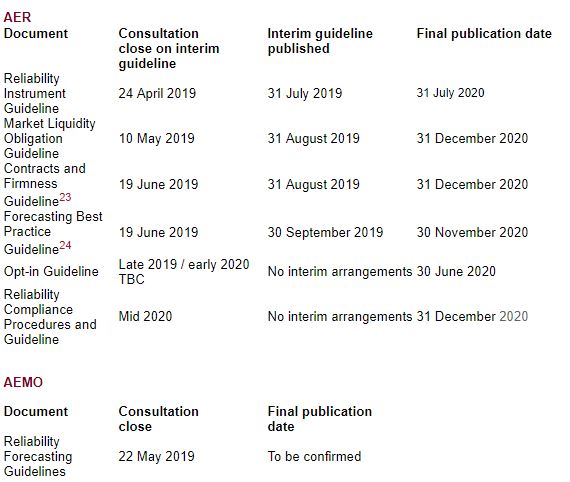