Over the course of the last year, New York employers saw significant state and local employment law developments. This trend will continue into the new year with a plethora of employment laws slated to become effective.

We summarize some of the key changes to New York employment laws for 2023, and offer some practical advice, below.

As of December 31, 2022, the minimum wage for most employees in New York state shall be: 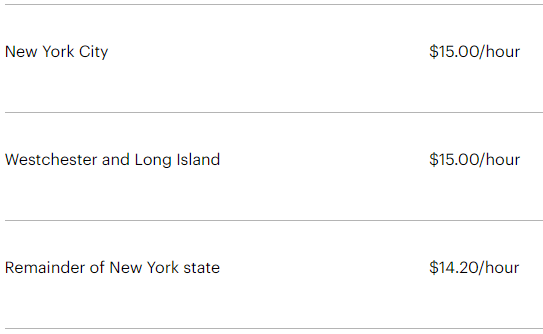 As of December 31, 2022, the allowable "tip credit" for food service workers and service employees and the minimum cash wage will increase for employees working outside New York City, Westchester, or Long Island.

Tipped Food Service Worker A food service worker is defined as any employee who is primarily engaged in the serving of food or beverages to guests, patrons, or customers in the hospitality industry, including, but not limited to, wait staff, bartenders, captains, and bussing personnel; and who regularly receives tips from such guests, patrons, or customers. The term food service worker does not include delivery workers. 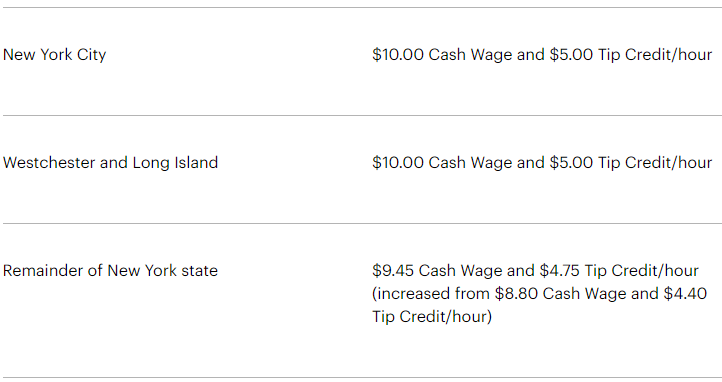 Tipped Service Employee A service employee is an employee, other than a food service worker or fast food employee, who customarily receives tips.

As of December 31, 2022, the salary threshold for employees working outside of New York City, Westchester, or Long Island is increasing. The salary threshold is the minimum salary employers can pay workers classified as exempt pursuant to the administrative and executive exemptions under New York state law. Consequently, employers must pay particular attention as the year-end approaches to ensure that those positions they intend to keep exempt remain exempt. 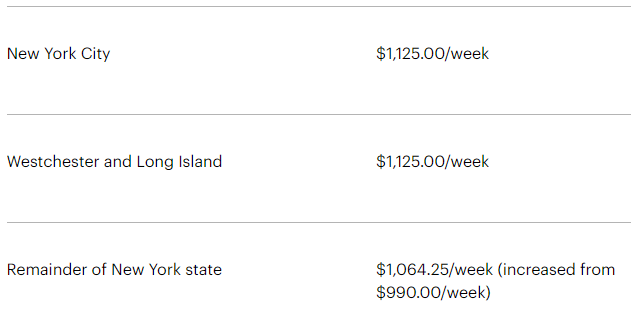 In March 2021, New York passed an amendment to the New York Labor Law requiring New York employers to provide up to four hours of paid leave for employees to receive a COVID-19 vaccine. As described in our previous advisory (available here), this requirement has been extended to remain in effect through December 31, 2023.

In December 2021, New York City passed the Automated Employment Decision Tools Law, requiring employers to conduct independent bias audits of automated employment decision tools (AEDT) used to evaluate job candidates or employees. The law is scheduled to become effective on January 1, 2023, and it has garnered significant attention due to its sweeping implications for New York City employers that utilize AEDTs. We highlighted this legislation and subsequent guidance from the City in our previous advisories (available here, here, and here).

New York City employers covered by the new law are required to:

New York City's and Westchester County's wage transparency laws went into effect on November 1 and November 6, 2022, respectively. A comparison of the two local laws is summarized in our prior advisory (available here). In addition, the New York state legislature passed its own statewide wage transparency legislation back in June 2022. A comparison of the New York City wage transparency law and the proposed New York state law is summarized in our prior advisory (available here). The legislation has been awaiting Governor Hochul's signature and would become effective 270 days later.

In sum, New York employers should plan ahead, determining whether and how they will be impacted by the new laws, and prepare to update their employment policies and procedures accordingly.