Payroll tax problems - Is Thomas and Naaz a bitter pill to swallow for medical practices?

The decision in Thomas and Naaz started alarm bells ringing for medical and allied health practices and their advisers.

Some practices are structured so that each practitioner provides medical services to their patients, and the practitioner then receives administration services from a separate service entity.

Until recently, advisers had often considered that patient fees that the service entity collected on the practitioner’s behalf were not subject to payroll tax when they were paid to the practitioner.

The decision in Thomas and Naaz has shaken confidence in that reasoning.

But is it all doom and gloom for practices structured in this way? It depends on the specific facts.

What actually happened in Thomas and Naaz?

The doctors dealt directly with the patients and paid a fee to the service entity for the provision of the services.

Most of the doctors requested that Thomas and Naaz deal with Medicare and collect these fees on their behalf. The flow of money was as follows:

1. The doctors bulk billed each patient.

2. Patients assigned their Medicare benefits to the doctors.

3. Thomas and Naaz made claims on Medicare.

4. The funds were then placed into an account held by the medical centre where all the doctors’ billings were held in one account.

6. After the first four weeks, and then fortnightly, Thomas and Naaz paid an amount equal to 70% of the claims paid by Medicare for a particular doctor, retaining the other 30% as a service fee.

The terms of the service agreement included the following:

1. The agreement was said to be ‘in respect of the provision of The Services by the Doctor’.

2. The doctor agreed to provide the services on a five-day week basis, including weekend rotation.

3. The doctor agreed to ‘at all times act to promote the interest of The Clinic’.

4. The doctor agreed to ‘abide by operating protocols issued by The Venture from time to time’.

5. There were a series of obligations on the doctors to:

6. Doctors were required to bulk bill patients and then pay the medical centre 30% plus GST of the doctor’s total billings.

7. A normal day was expressed as nine hours with a one-hour unpaid lunch break

8. Doctors were obliged to provide at least 6 weeks’ notice of a vacation

9. Doctors were also restricted to a maximum of four weeks’ vacation leave per 12-month period.

10. Doctors agreed to a restraint with an exclusion zone of five kilometres from the medical practice.

How did Thomas and Naaz treat their payroll tax position?

Thomas and Naaz self-assessed their payroll tax position on the basis that the doctors were working in their own separate practices and were providing services to their patients only.

What did the Tribunal conclude?

The Tribunal, after reviewing the services agreement, concluded as follows: 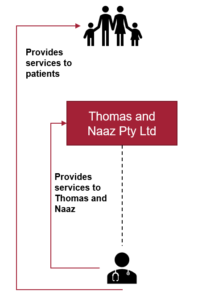 The Tribunal listed the following clauses to support this conclusion:

The risk for medical and allied health practices is that the terms of a services agreement, and what happens in practice, may mean a practitioner is providing services not only to their patients, but also to the practice entity.

Is your practice at risk of being liable for payroll tax?

The facts in Thomas and Naaz reflected a high level of control that the practice entity exercised over the doctors. That led to the conclusion that the doctors were essential to the service entity’s business of carrying on a medical practice.

Contrast this with circumstances where doctors carry on their own businesses, free of any control, and exercise a high level of control over the service entity. In those circumstances, it would be much harder for the revenue authority to maintain an argument that the doctors were providing services to the service entity, rather than the other way around.

Medical and allied health practices and their advisers should take two lessons from Thomas and Naaz:

1. The first is that the OSR/ QRO/ SRO will progress audit activity on medical and allied health practices.

2. The second is that a practice’s risk does not depend on the conclusion in Thomas and Naaz but on their own particular facts.

Now is the time to check service agreements and the reality of how the practice is operated.