Keeping the CPTPP as a Spare Tire: The New and Different Automotive Rules of Origin Under the CUSMA and the CPTPP

The North American automotive sector is facing significantly more rigorous content rules since the Canada-United States-Mexico Agreement[1] (“CUSMA”) replaced the North American Free Trade Agreement (“NAFTA”) on July 1, 2020. The requirement for achieving duty-free treatment poses commercial and compliance challenges for both vehicle and parts manufacturers in Canada, the US and Mexico.

Canada and Mexico are also parties to the Comprehensive and Progressive Agreement for Trans-Pacific Partnership[2] (“CPTPP”), which contains relatively lower and simpler rules of origin for vehicle and parts trade, including with Japan. With European and Korean vehicle and auto parts trade already liberalized by the Comprehensive Economic and Trade Agreement[3] (“CETA”) and Canada’s bilateral agreement with Korea[4] (the “CKFTA”), Japan was the last major automotive exporting jurisdiction to obtain duty-free access to the Canadian market.

The less stringent CPTPP rules of origin may allow some Canadian and Mexican vehicle and parts manufacturers to sidestep the CUSMA requirements for vehicles or parts shipped directly between Canada and Mexico. Given the importance of the US market, most manufacturers will be incentivized to organize their operations to meet (and demonstrate compliance with) the more rigorous CUSMA rules of origin. However, manufacturers may decide that in some cases meeting the easier CPTPP rules and paying tariffs on shipments into the US is a preferable option.

Comparison between the Rules of Origin under CUSMA and CPTPP

Rules of origin determine whether a good qualifies for “originating” status under a trade agreement, and is therefore eligible for preferential (often zero) tariff treatment pursuant to the agreement. These requirements are particularly important for the automotive sector due to the numerous inputs, components and sub-assemblies in a vehicle and the high degree of supply chain integration in some regions such as North America.

Both the CUSMA and the CPTPP have product-specific rules which set out “regional value content” (“RVC”) requirements for motor vehicles and vehicle parts. CUSMA has also added further requirements related to labour value content (“LVC”), and steel and aluminum content.

RVC calculation methodologies are specific to the trade agreement. At a high level, the CUSMA provides for the use of “net cost” or “transaction value” methods in different circumstances. “Net cost” means the total cost minus sales promotion, marketing and after-sales service costs, royalties, shipping and packing costs, and non-allowable interest costs that are included in the total cost[5] The transaction value, on the other hand, is defined as the price actually paid or payable for a good or material as part of the transaction, adjusted by certain principles laid out in the Customs Valuation Agreement.

The CPTPP also uses a “net cost” method (with a vey similar definition), but also provides for additional flexibility through other methodologies, such as the “focused value method”, “build-up” and “build-down” methods. The applicable method can make a significant difference in the calculated RVC. Often importers can choose the most favourable method to meet the applicable threshold.

The CUSMA RVC requirements are being increased from the NAFTA required levels in stages. Upon completion of the applicable phase-in periods, RVC requirements for passenger vehicles and light trucks will increase to 75% under the net cost method from the NAFTA threshold of 62.5%. Parts for passenger vehicles and light trucks are categorized into core parts, principal parts and complementary parts.[6] RVC requirements for parts range from 62% to 66% under the net cost method in the first year of the CUSMA’s entry into force, and gradually increase in the following three years. 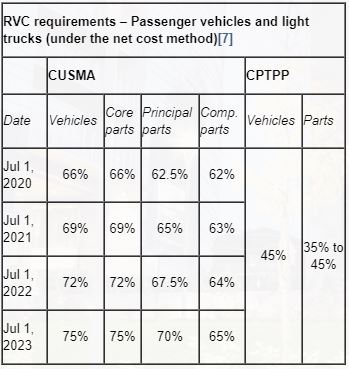 RVC requirements for heavy trucks will increase to 70% under the net cost method from the NAFTA threshold of 60% after the applicable phase-in period. Parts for heavy trucks are categorized into principal parts and complimentary parts. RVC requirements range from 50% to 60% in the first four years of the CUSMA’s entry into force and gradually increase in three stages. 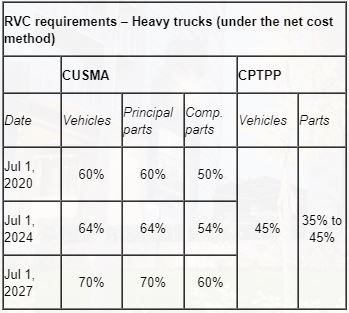 As we reported in our bulletin titled “What's in a name – the USMCA is the new NAFTA” in October 2018, the CUSMA introduced labour value content (“LVC”) rules that are applicable to motor vehicle producers, but not to producers of auto parts. These rules are novel and unique. They do not appear in the CPTPP, CETA and CKFTA.

LVC rules require motor vehicle producers to certify that a certain percentage of a vehicle’s content is produced by workers earning a minimum of US$16 per hour (approximately C$20 or 319 pesos, at current exchange rates). The LVC requirement for passenger vehicles starts at 30% and gradually increases in stages to 40% after four years. Light trucks and heavy trucks have an LVC requirement of 45% immediately upon the CUSMA’s coming into force. 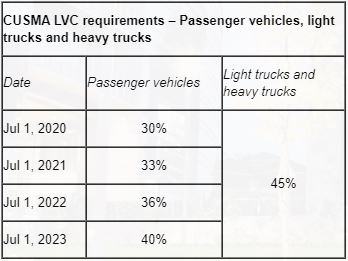 The LVC threshold can be met through material and manufacturing expenditures, North American research and development and information technology expenditures, and the operation of an engine assembly plant, or a lithium-ion battery plant that employs workers earning a minimum of US$16 per hour.[8] This requirement was sought by the United States to reduce the extent of Mexico’s labour cost advantage, but it imposes compliance burdens for all North American manufacturers.

Also at the insistence of the US, the CUSMA parties negotiated content requirements to encourage the use of North American steel and aluminum. There is no counterpart in Canada’s other trade agreements. For passenger vehicles, light trucks and heavy trucks to be considered originating, 70% of the producer’s purchases of steel and aluminum must originate from Canada, the US or Mexico. This requirement applies to all of the vehicle producer’s corporate purchases throughout the CUSMA countries, and includes direct purchases from a steel producer as well as purchases from distributors and other resellers, including service centers.

As of July 2027, for a vehicle to be eligible for preferential treatment under the CUSMA, all steel manufacturing processes (except metallurgical processes involving the refinement of steel additives) for the steel used in the vehicle must occur in CUSMA countries.[9] The parties have also agreed to review the aluminum rules of origin requirement ten years after the entry into force of the CUSMA.[10]

Preferential Treatment under CUSMA and CPTPP

Since Canada and Mexico are parties to both the CUSMA and the CPTPP, Canadian and Mexican vehicle and parts manufacturers can choose to seek preferential treatment under either agreement for vehicles and parts shipped from one jurisdiction to the other. If an imported good does not meet the high CUSMA threshold, yet satisfies the requirements under the CPTPP, Canadian importers can claim preferential treatment under the CPTPP to avoid otherwise applicable most-favoured nation (“MFN”) tariffs (6.1% on passenger vehicles and 6% to 8.5% for most vehicle parts). Mexican vehicles and parts[11] comprise a significant portion of Canada’s annual imports of vehicles and parts.[12] With 13% to 15% of total imports, Mexico is the second largest exporter of automotive goods to Canada, only second to the US, but well ahead of third-ranked Japan.[13] These CPTPP rules of origin requirements may provide a way for manufacturers to mitigate the impact of the strict CUSMA requirements in certain areas of the supply chain.

Canadian auto manufacturers have the option of seeking preferential treatment under the CPTPP when importing parts from Mexico (and vice versa), even if the goods would not meet the RVC/LVC requirements under the CUSMA. Although the vehicle parts themselves may not satisfy the CUSMA rules of origin criteria, the manufactured vehicle can obtain originating status under the CUSMA if it satisfies the RVC/LVC requirements. This aspect offers Canadian and Mexican vehicle and auto parts producers an attractive, less restrictive way to manage their supply chain of auto parts by taking advantage of more lenient rules of origin under the CPTPP.

A Canadian-based vehicle manufacturer that sells vehicles to the US market, for example, could consider sourcing duty-free a wider variety of parts from Mexico under the CPTPP, even if these do not meet the RVC/ LVC requirements under the CUSMA. Exports to the US of vehicles that incorporate such parts could still receive preferential tariff treatment if the vehicle in its entirety increases sufficiently in regional and labour value through the assembly process to meet the RVC/LVC threshold under the CUSMA.

It would also be plausible for a Canadian parts manufacturer to source inputs duty-free from another CPTPP country, like Vietnam, for the manufacturing of an auto part in its Canadian facilities. Assuming that the inputs are transformed to such a degree that they meet RVC requirements under the CPTPP, they could be exported duty-free to a vehicle manufacturer in Mexico for the production of a passenger vehicle. If this Mexican vehicle producer meets the RVC/LVC in the production and assembly of the vehicle while also complying with the 70% threshold for corporate purchases of aluminum/steel from CUSMA countries, it could then consider shipping the vehicle duty-free to the US as an originating good under the CUSMA.

Similar to Article 303 under the NAFTA, Article 2.5 of the CUSMA restricts the duty relief/drawback to the “lesser of”:

If, for example, a producer in Canada sources input materials from China under the MFN duty rate of 6% and subsequently exports the Output Good to the U.S. duty-free under the CUSMA, the Canadian producer would be ineligible to claim any duty relief or drawback, which is capped at $0, because no duties are payable on the Output Good imported into the USA.

In such a scenario, possible preferential treatment afforded under the CPTPP can provide Canadian producers with an opportunity to avoid duties by re-organizing or shifting their supply chain from outside the CPTPP countries into them (e.g. sourcing the input from Japan). This strategic revamping of the supply chain could serve as a viable work-around of the duty drawback/relief restrictions/cap on duties paid on imported manufacturing inputs (by avoiding or reducing such duties as the result of CPTPP preferential tariff treatment).

While the US market is the major destination for the output from assembly plants located in North America, the interplay between the CPTPP and the CUSMA rules of origin provide Canadian and Mexican vehicle and parts manufacturers with some interesting options to leverage the benefits of both agreements. McMillan’s International Trade Group can assist companies in the automotive sector navigate the complexities under these new free-trade agreements.