Draft rules made pursuant to the Space (Launches and Returns) Act 2018 have been released, providing greater detail in relation to many of the Act's novel provisions. The Act itself passed both house of Parliament last year following the Australian Government's review of the outdated Space Activities Act 1998. Changes to the legislation were made to support innovation and investment in the domestic space sector, while also accommodating the changing operating environment for space activities.

The amendments recognise the increasingly accessible nature of the space industry to non-government participants and attempts to facilitate the operation of private sector businesses in this area, whilst preserving safety and security. With the growth of commercial rockets and space services, through SpaceX and Virgin Galactic, the reality of a competitive space industry in Australia could be closer than you think.

The Government has released its exposure draft of the rules made under the Space (Launches and Returns) Act 2018 (Cth) (the Act). The Act comprises an amended version of the Space Activities Act 1998 (Cth). The rules set out the majority of the operational provisions of the Act, ensuring that the regulatory framework in Australia can adapt quickly with the evolving operating environment for space activities.

The amending legislation, the Space Activities Amendment (Launches and Returns) Act 2018, was passed by both houses of Parliament in August 2018 and will come into force on 31 August 2019. The Act aims to provide improved regulatory flexibility and reduce barriers to entry for market participants, to better facilitate space-faring activities. The Act includes licensing arrangements, insurance requirements, and safeguards to be taken for certain space activities. Penalties of up to $21 million are imposed for non-compliance.

Since the enactment of the Space Activities Act 1998, the regulatory framework in this area has centred around launches of satellites from overseas jurisdictions where Australian nationals are a responsible party. The new regime contemplated by the amended Act captures a wider number of scenarios, including high power rocket launches and launches from aircraft in flight. The changes were made in recognition of the changing landscape of the space and rocket industries in Australia.

The definition of 'space objects' covered by the Act has been broadened, and now includes all or part of any object which is to go beyond 100km above sea level. Further, penalties for non-compliance with the Act are greater than those previously in place, due to the higher risks associated with greater number and power of objects involved in launches.

The Act left a number of further measures to be specified in the rules, which have now been released in draft form, in three separate sets:

The General Rules specify the requirements in relation to licences, permits and certificates required to undertake launches and returns. The focus of the General Rules is on the nature of the activities themselves, rather than the person or organisation making the application - reflecting that the launch permit holder themselves no longer requires a facility licence.

The draft General Rules contain several specifications for applications for the various licences available under the Act. These are summarised in the table below. 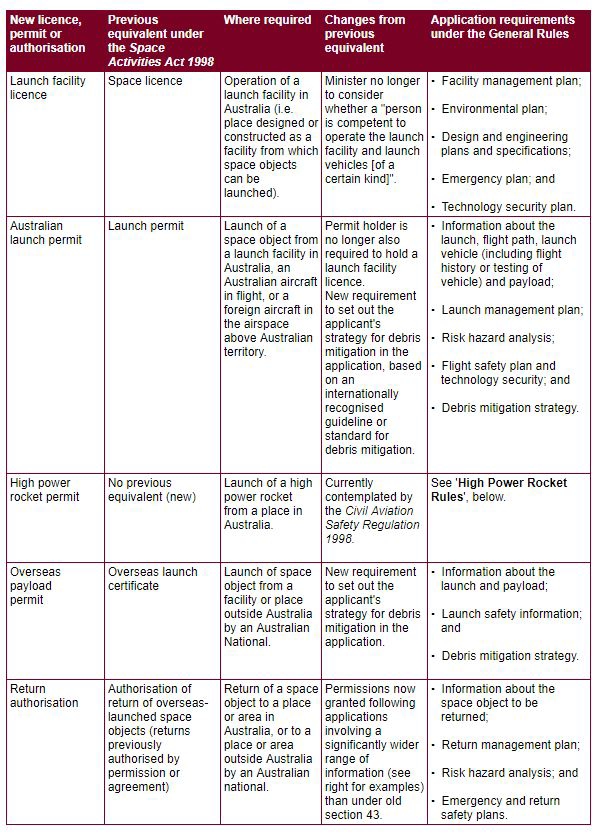 The General Rules contain several safety specifications - particularly, they include rules for launching objects from outside Australia or for space objects returning from anywhere in the world. They also incorporate the Flight Safety Code by reference (which is currently being reviewed).

You can view the exposure draft of the General Rules here.

High power rockets are subject to a range of safeguards and restrictions under the Act. They are defined in the draft High Power Rocket Rules as objects:

The Government has flagged that it will consider amending this definition before publication of the final rules. The rules specify that for grant of a high power rocket permit, the rocket and the flight path for the launch must be as effective and safe as is reasonably practicable, having regard to the purpose of the launch and the design of the rocket. The rules further prescribe standard conditions applicable to high power rocket permits, including notice requirements in relation to timing of the launch, the planned trajectory of the rocket, and territorial limitations that prohibit crossing of rockets into foreign jurisdictions. The rules are also prescriptive about what information must be provided in an application for a high power rocket permit, including information about the applicant, the launch, the flight path, the rocket, the payload, and the applicant's safety and emergency plans.

You can view the exposure draft of the High Power Rocket Rules here.

Under the Act, permit holders must meet certain insurance or financial thresholds in order to legally participate in launch and return activities. This can be achieved in one of two ways.

1. The permit holder must be insured against any liability it might incur to pay compensation for damage to third parties caused by the launch or return of a space object. The Insurance Rules set out the minimum amount of insurance that holders of launch permits, high power rocket permits and return authorisations must hold, as follows:

2. Alternatively, the permit holder must show direct financial responsibility for the launch or return, for an amount no less than the minimum insurance amount. The Insurance Rules provide that this is satisfied if the permit holder gives the Minister evidence that is has sufficient assets available, or is otherwise able to meet any liability for compensation under the Act for damage to third parties.

You can view the exposure draft of the Insurance Rules here.