The European Patent Office considered a database and means for building structured queries technical. Here are the practical takeaways from the decision T 0862/05 (Sales system/CITIBANK) of 20.2.2008 of Technical Board of Appeal 3.5.01:

Databases and means for building structured queries are (most likely) technical.

However, their combination does not necessarily comprise technical considerations.

According to the present decision, the underlying application relates to the following:

1. The invention concerns an electronic sales and service support system intended for banks. According to the explanations in the patent application (p. 2-7), marketing of financial services must be targeted to people who were inclined to make a change or open other accounts. To anticipate a customer’s needs and support targeted marketing, a service provider had to know its customers. In an effort to deal with a large customer database, businesses traditionally maintained customer records. The database must be assembled from diverse sources and information be retrieved from the central database in a meaningful and practical way. However, most bank employees never learned how to use complex query languages. Instead, developers wrote custom applications that were used by the bank employees having only a limited understanding of the program. Thus, an employee’s ability to use a database was often limited by the custom applications written by someone else. It was an object of the invention to provide an electronic sales and service support system that provided improved identification of sales targets using a centralized database. 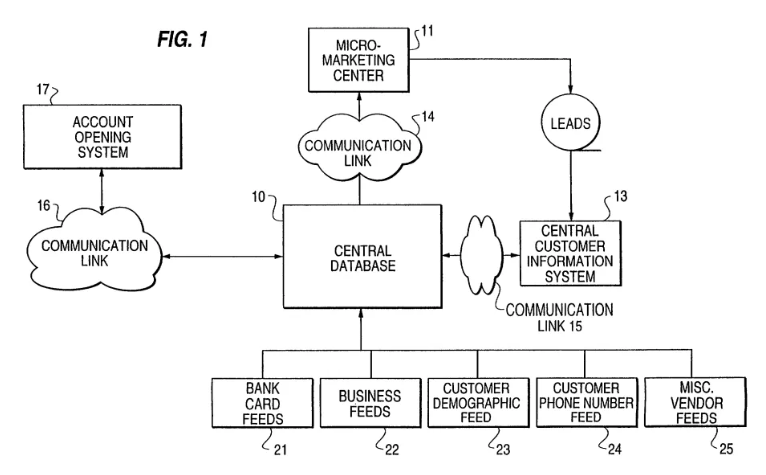 means for inputting data into the central database (10) from a plurality of sources;

means for searching the database in response to structured queries and identifying records that match said queries;

means for building said structured queries of said database (10) in response to a user’s selection of criteria from a graphic user interface of at least one user workstation (12):

a plurality of geographically separated branch systems (17), each branch system including at least one branch workstation;

a central customer information system (13) linked by telecommunication or other means so that it can communicate electronically with the central database, the central customer information system (13) being geographically separated from, but linked (15,16) for electronic communication to, the workstations at the branch systems (17) and means for distributing the leads generated by the marketing centre among selected bankers at the bank branches and for assigning said leads to the selected bankers who will handle said leads

In light of the cited prior art, the responsible first instance examining division rejected the present application due to lack of inventive step:

II. The examining division held that the invention according to the main request and two auxiliary requests lacked an inventive step over an article by K. Morrall entitled “Database Marketing leaves marketing to the branches” published in Bank Marketing, November 1994, p.23-30, and common general knowledge (Article 56 EPC 1973).

The rejection was appealed by applicant. Then, as a first step, the Board in charge determined the technical features of the claimed subject-matter as follows:

2. The Board considers the technical features of claim 1 to be the following:

– means for inputting data into the central database,

– means for searching the database and identifying records,

– workstations with or without a graphic user interface,

The appellant appeared to accept that these features were known in the art. However, their combination is allegedly not known, resulting in a quicker generation and distribution of sales leads:

2.1 The appellants do not deny that these features are known per se (cf also the description of the prior art as summarized above). They do however argue that the particular way the components are combined and interact was not known. It was a significant feature of claims 1 and 11 that electronic communication was used in the way specified by the claims. It resulted in a quicker generation and distribution of sales leads. The skilled person would not arrive at anything falling within the scope of claims 1 or 11.

In contrast, the Board in charge replied that the interactions are largely of commercial nature:

2.2 Looking closer at the interactions invoked by the appellants, the Board notes that these are largely of a commercial or organisational nature. Sales leads – ie specific information about (potential) customers – are generated by a so-called micromarketing centre. The only thing claim 1 says about this micromarketing centre is that it contains workstations. The workstations are connected to a database, but this is clearly necessary since sales leads must be generated from some kind of starting data. There is a central customer information system also linked to the database, but the function of this system is not further defined in the claim and thus has no specified bearing on the generation and distribution of sales leads.

Consequently, the effect achieved by the combination of the technical features is non-technical and must thus not be taken into account by the Board in charge for assessing inventive step:

2.5 Finally, the appellants have insisted that the skilled person would not have arrived at anything falling within the scope of the claims. This is however not always a relevant argument with respect to a claim containing non-technical features. It was held in decision T 273/02 – IC card/TOSHIBA (not published in the OJ EPO) that the “could/would approach” only applies if the “would” part involves technical considerations. This is another way of saying that the ingenuity of a claim’s non-technical features is of no relevance since only technical contributions may contribute to an inventive step. As for the claimed combination of technical features, the Board is convinced that the skilled person would indeed have arrived at it.

As a result, the Board concluded that the person skilled in the art would have arrived at the feature combination provided by the technical features and thus dismissed the appeal.