Just when you thought you had seen everything, last week a Judge in California allowed for the possibility that the entire site of a Manufactured Gas Plant destroyed in the Great Earthquake of 1906 could be a point source still regulated under the Federal Clean Water Act.

For that reason, and because the Judge also found it "plausible" that each "discharge" to a Water of the United States of groundwater containing pollutants from that "point source" "constitutes a separate Clean Water Act violation that begins a new statutory clock", the Judge denied a motion to dismiss a citizen suit alleging those "discharges" violate the Clean Water Act.

And so there will either be a settlement of the citizen suit or full discovery, and perhaps a trial, and perhaps, a few years from now, the Ninth Circuit will be forced to grapple with several questions still unanswered for now including (1) can an entire property really be a point source as the Judge suggests; (2) under what circumstances is the percolation of subsurface contaminants into groundwater and ultimately to a Water of the United States the functional equivalent of a direct discharge of those contaminants; and (3) what about that Ninth Circuit decision in March holding that a criminal conviction for a violation of the Clean Water Act requires a knowing discharge to water?

In the meantime we can expect to see citizen suits like these flourish. Because if the site of a facility destroyed one hundred and fifteen years can be a point source what isn't? 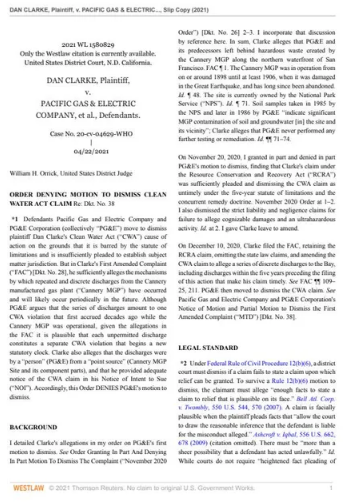