’Twas brillig, and the slithy toves

Did gyre and gimble in the wabe:

All mimsy were the borogoves,

And the mome raths outgrabe.1

Through no fault of the Connecticut General Assembly, in late 2017 our newly increased Connecticut estate and gift tax exemptions were partially affected by the 2017 Federal Tax Act, commonly known as the Tax Cuts and Jobs Act of 2017. That act suddenly increased the federal basic applicable exclusion amount2 for the estates of persons dying in 2018 to $11.18M. Although the 2018 and 2019 Connecticut exemptions were fixed at $2.6M and $3.6M, respectively, the subsequent references in the tax tables to the newly-doubled federal exemption meant that the new Connecticut tax tables made about as much sense as Jabberwocky after 2019. (See our client alert explaining this issue in more detail.)

The General Assembly was all over tax reform in the just-ended 2018 legislative session enacting not one, but two bills addressing this problem. The budget bill, which became effective on May 15, 2018 as Public Act 18-81, addresses this issue as follows: 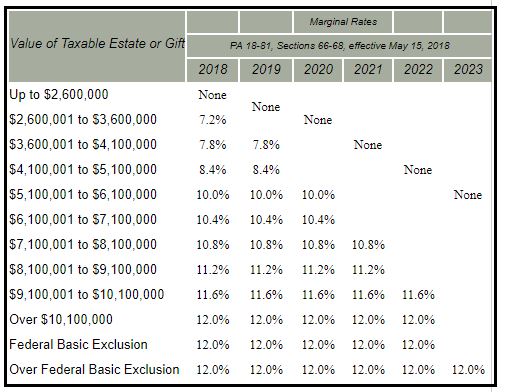 To make things really fun and more confusing, another tax act, Public Act 18-49, contains a different tax table and increases the Connecticut exemption amount to $5.49M in "2020 and thereafter." That means the Connecticut estate and gift tax exemptions would not increase after 2020 and would not equal the federal exemption by 2023. Once Governor Malloy signs that act, as he is expected to do, it will be up to the Legislative Commissioner’s Office ("LCO") to interpret the two acts and codify them so they are consistent, creating one set of rules, and one tax table that makes sense. However, no one knows whether the result will be $11M plus in 2023, or $5.49M after 2020.

With any luck, we will all know the answer by October. Until then, Jabberwocky!