Guidelines on the Interpretation of Puerto Rico’s Employment Legislation, Chapters 1-3

As we have previously discussed, the Puerto Rico Department of Labor (PR DOL) has recently published the first edition of its Guidelines on the Interpretation of Puerto Rico’s Employment Legislation (Guidelines), which includes the PR DOL’s official statutory interpretation of nearly all of Puerto Rico’s employment laws. The over 200-page Guidelines are divided into 15 chapters and cover a wide range of statutes. This Insight is the first in a series that will provide a chapter-by-chapter analysis of the most important topics addressed in the Guidelines, including an interpretation of key provisions of the Puerto Rico Labor Transformation and Flexibility Act, Act No. 4 of January 26, 2017 (“Act 4-2017” or “LTFA”), which made substantial changes to virtually all existing employment laws in Puerto Rico, including those governing unjustified dismissal, wage-and-hour, vacation and sick leave, unemployment, lactation leave, employment discrimination and some employee benefits.

The PR DOL recognizes in this chapter the LTFA’s intention to overturn the PR Supreme Court’s long-standing position that any questions regarding an employment statute’s interpretation should be resolved in the employee’s favor. The PR DOL explains that employment statutes in PR should instead be subject to the general rules of interpretation applicable to all PR statutes set forth in Article 14 of the PR Civil Code. This article provides, “[w]hen a law is clear and free from all ambiguity, the letter of the same shall not be disregarded, under the pretext of fulfilling the spirit thereof.” P.R. Laws ann. tit. 31, §14. It is yet to be seen whether courts will follow the PR DOL’s guidelines in this regard.

The PR DOL also recognizes the LTFA’s position allowing employers to exercise the right to interpret their own rules and policies. To reserve this right, employers must expressly do so in their employment policies, in writing. The Guidelines explain that in such cases, courts shall not substitute their own interpretation for the employer’s as long as the employer’s is a possible and reasonable interpretation. This recognition benefits employers.

The PR DOL here discusses Article 1.2 of the LFTA, which provides that employees hired prior to January 26, 2017 “shall continue to enjoy the same rights and benefits they enjoyed before [said date], as expressly provided in the Sections thereof [i.e. of the LTFA].” The PR DOL explains that in order to determine whether there were changes in the rights of employees hired prior to January 26, 2017, it is necessary to examine the wording of the statutory provision in controversy.

The following table includes a detailed summary of the rights of the employees hired prior to the approval of the LTFA, which are grandfathered pursuant to Article 1.2 of the LFTA: 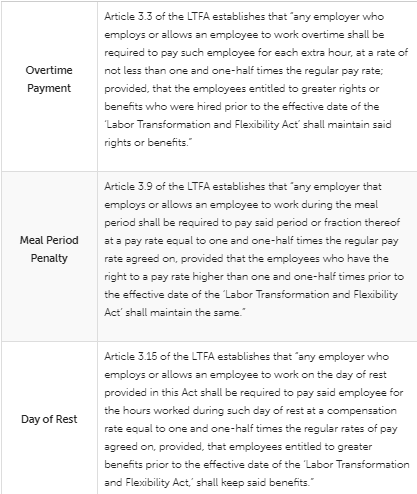 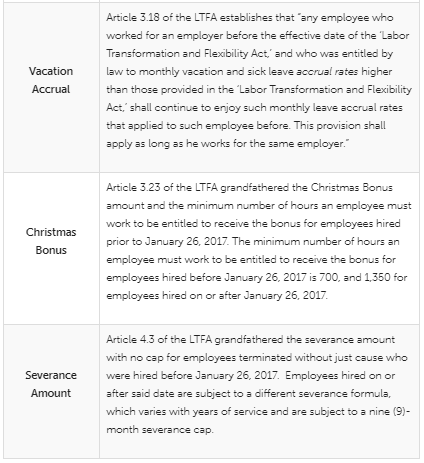 Here, the Guidelines recognize—as established by the LTFA—that employment contracts can be either verbal or written, unless otherwise required by a special law, and must be drafted in any language the employee understands. The LFTA creates a presumption that if a written contract is signed by the employee, it was signed with knowledge of the language in which it was written and of its content. Any person over age 18 is authorized to enter into contracts as an employer or an employee. Employment of minors is still possible subject to the provisions and regulations under Act No. 230 of May 12, 1942, as amended.

As for independent contractors, the Guidelines address the judicial effect of Article 2.3 of the LFTA, which establishes an uncontested presumption of independent contractor status provided that all the specified requirements in that Article are met. In cases where the presumption does not apply, the determination of whether there is an employment or an independent contractor relationship will be made on the basis of commonly accepted criteria. In order to maintain a degree of certainty as to the nature of the relationship and to promote entrepreneurship, the so-called economic reality test will not be used unless Puerto Rico or federal law expressly requires its use or other criteria in that particular circumstance. It bears emphasis that under this new definition, a person may be considered an independent contractor for purposes of Puerto Rico law, but not under the federal Fair Labor Standards Act or the Federal Insurance Contributions Act.

The Guidelines also recognize that in any contract or employment document, acknowledging receipt or signature generated electronically has the same legal effect as though the acknowledgement was in writing. Similarly, when a copy of a document is required to be sent to an employee, or the employer is required to make written notices to employees, the use of an electronic version is valid and binding. The Guidelines clarify, however, that when an employment law—such as the Puerto Rico General Antidiscrimination Statute, Act No. 100 of June 30, 1959 and the Puerto Rico Employment Security Act of June 21, 1956—specifically requires notices to be posted, electronic posting will not suffice.

Finally, with regard to temporary service employees, the Guidelines establish that after the approval of Act 4-2017, the new provisions on overtime payments and vacation accrual rates apply to all employees who began their relationship with a Temporary Service Company (TSC) on or after January 26, 2017, regardless of when the employees began work for the client company. Employees hired prior to January 26, 2017 will continue to enjoy the same rights and benefits they previously had. If, however, the employment relationship between the TSC and the employee ends, but another separate and independent employment relationship is later created between the same parties, the subsequent employment relationship will be presumed covered under a new contract subject to the amendments introduced by Act 4-2017. This presumption will apply so long as the termination of the old relationship and creation of the new one was not a subterfuge to enable the employee to accrue vacation and sick leave provided by Act 4-2017.

Stay tuned for a discussion of Chapters 4, 5 and 7, which will cover religious accommodation, wage and hour matters, flexible schedules, and the Christmas bonus.