The ACCC releases its first quarterly report on airline competition in Australia.

As the domestic air passenger industry slowly resumes flight operations, it finds itself in a ‘new normal’ following severe disruption caused by the COVID-19 pandemic. Recognising the potential for anti-competitive behaviour in the domestic air passenger services market to lead to fewer airlines, more expensive airfares and a reduced number of flight options, the Treasurer directed the ACCC to:

In particular, the Treasurer has asked the ACCC to consider the capacity the airlines are putting on each route and whether this is occurring in a way that may damage competition.

The COVID-19 pandemic has resulted in severe disruption to airline travel in Australia and overseas. When compared with domestic passenger numbers from April 2019, numbers in April 2020 were down. In August 2020, the change in domestic passenger numbers year on year remained a reduction in 84.5% following subsequent infection spikes and a further tightening of border restrictions.

Acknowledging the potential for damage to competition as the airline industry begins scaling its operations up, the ACCC welcomed the Treasurer’s direction under section 95ZE of the Competition and Consumer Act (Cth) (the Act) for the ACCC to monitor the prices, costs and profits of Australia’s domestic airline industry.

Changes in the sector

The Report noted that prior to the COVID-19 pandemic, the Australian domestic airline sector was in many respects a duopoly between Qantas Group and Virgin Australia, with much of the activity centred around the Sydney – Melbourne – Brisbane triangle. The ACCC noted that the pandemic had changed the way in which domestic airline services operate and are structured, including as a result of:

The structural change in the sector, combined with efforts by airlines to stimulate demand by discounting airfares may directly affect the competitiveness of the domestic air passenger services market. It is apparent that the ACCC is conscious of the potential for the current state of the market to result in unfavourable outcomes for competition and consumers and is ready to act to monitor and take action against conduct identified as concerning.

While the ACCC expects that airlines will provide non-subsidised services when it is commercially viable for them to do so, the government has implemented temporary programs to support the industry by covering the cost of operating a minimum domestic aviation network. The programs of support were intended to assist in the recovery of the Australian domestic air passenger services industry by providing government support to reduce the cost base faced by commercial airlines and therefore improve the financial viability of flights. The programs are cost neutral for the airlines, who are incentivised to provide services as the government specifies. The government funding programmes have included funding:

Regional and domestic airlines have also been offered financial relief though the Australian Airline Financial Relief Package (AAFRP) which involves refunding and waiving several government charges on the industry on an ongoing basis for flights between 1 February 2020 and 31 December 2020, including the aviation fuel excise and Airservices Australia charges on domestic airline operations. The government has made a pool of $715 million available to eligible applicants applying for the AAFRP.

On 11 September 2020, the ACCC granted authorisation to allow coordination of flight schedules and revenue sharing agreements between Rex and either or both of Qantas and Virgin Australia on ten regional routes. The rationale for allowing the coordination was an overriding public benefit to promoting consumer choice by supporting the continuity of services and an even spread of flights during the COVID-19 pandemic. Authorisation is granted until 30 June 2021.

After the release of the Report, on 23 October 2020, Virgin Australia and Alliance Airlines applied for authorisation to cooperate in providing services on 40 regional routes and two short haul international routes. Interim authorisation was granted on 19 November 2020.

Virgin Australia entered voluntary administration in April 2020. Bain Capital, the new owner, and Virgin Australia announced that a restructuring plan directed to reducing Virgin’s cost base and simplifying its operations by streamlining the Virgin fleet to meet reduced passenger numbers and discontinuing the Tiger brand.

The ACCC noted that Bain’s approach to running Virgin was likely to have a significant impact on the domestic airline industry, and that the ACCC will continue to monitor the situation.

The Report notes that Rex and Alliance Airlines are considering expanding their domestic operations. For instance, Rex is intending on expanding its operations into the Sydney – Melbourne – Brisbane triangle in March 2021, a route which was previously dominated by Virgin Australia and Qantas.

Protecting competition in the sector

The ACCC will use its monitoring and reporting powers to discharge its duties under the direction. The ACCC assess both quantitative data (for instance, passenger numbers and revenue) and qualitative information (for instance, Board papers), some of which will be obtained by way of its information gathering powers under the Act, which may be a warning to the sector that it is not immune to receiving section 155 notices or section 95ZK notices.

The ACCC also intends to use its advocacy, investigation and enforcement powers to protect competition in the domestic air passenger industry and will consider enforcement action where appropriate. Interestingly, the ACCC took particular care to note that it will be ready to utilise the full breadth of its regulatory toolkit by complementing its enforcement power with its powers to effect behavioural change in corporations via policy recommendations, “including potential regulatory protection for airline users, should there be signs that competition is not effective” rather than a ‘one note’ litigation-based approach to enforcement.

The Report flags certain behaviour which may damage competition in the sector, including use of loyalty programmes (which we have written about previously), disclosing sensitive commercial information via industry announcements and conduct which seeks to prevent a competitor from entering, expanding, or effectively competing (see Figure 1 below). In particular, the following practices were singled out:

The ACCC will publish its second report in the next quarter, at which point it will have obtained further insight into the state of domestic air travel in Australia. As domestic air travel recovers in line with easing travel restrictions we will watch with interest as the ACCC engages with potential competition concerns in the sector. 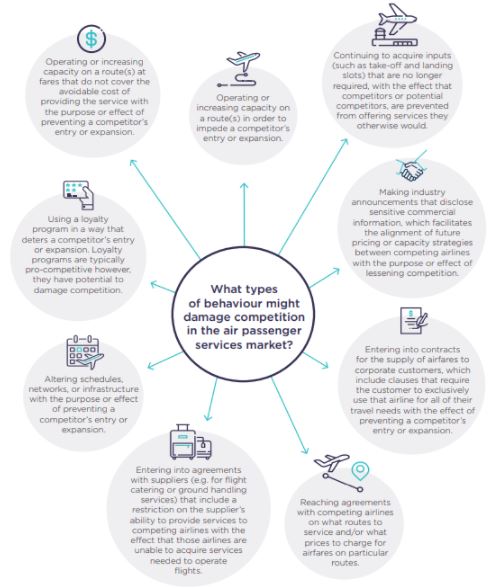