In the Canadian government’s latest effort to achieve zero plastic waste by 2030, it has published two consultation papers: one on the creation of labelling rules to enhance the accuracy of recyclability and compostability information on plastic packaging and single-use plastics and the other on the establishment of a federal plastics registry requiring plastic producers to report annually on their plastic contribution to the Canadian economy. Both consultations are open for stakeholder comment and feedback until October 7, 2022.

These consultation papers follow on the heels of Canada’s recent announcement of the timelines for the prohibition of the manufacture, import and sale of six single-use plastic items, which will come into force on December 20, 2022 under the Single-use Plastics Prohibition Regulations. For more information on this announcement, please read our bulletin Plan for the Ban: Canada Announces Timeline for Single-Use Plastics Prohibition.

This is the sixth bulletin in our “Plan for the Ban” series regarding prohibitions and increased regulation of single-use plastics.[1] This bulletin provides a summary on the two open consultation papers published by the federal government.

The “chasing arrows” symbol (), which is also known as the Mobius loop, is widely used to communicate to consumers that a product is made of recycled content or is recyclable.[2]

The Canadian government’s new proposal involves developing a labelling regime that would ban the use of this symbol on plastic items unless at least 80 percent of recycling facilities in Canada would accept and have reliable end markets for those items.[3] Furthermore, this proposal would introduce rules governing the use of common terms in the labelling of plastic packaging such as “compostable”, “degradable” and “biodegradable”.[4]

In addition, in assessing their plastic items, producers of plastics products would be required to select a compliance mechanism such as a third-party labelling program, calculator or a guideline.[7] The recyclability label given to any particular plastic item would reflect the results of the evaluation conducted using the chosen compliance mechanism.[8] Producers would have the flexibility in selecting a compliance mechanism, but the selected mechanism would need to adhere to certain minimum standards such as being transparent in how the recyclability of an item is determined.[9] Producers may also be required to demonstrate that they are using their compliance mechanism correctly by maintaining records to provide to the regulator upon request and offering a written explanation on how an item is recycled when consumers request it.[10]

The Canadian government is seeking feedback on this proposed labelling regime from a range of stakeholders, including manufacturers and importers of plastic packaging and single-use plastics, producer responsibility organizations, and waste management companies.

Along with new labelling rules for plastic products, the Canadian government is proposing the creation of a federal plastics registry that would require plastics producers to register and report on plastics in the Canadian economy. This registry would support Canada’s extended producer responsibility (EPR) policy, which aims to improve waste reduction and recycling activities by extending a producer’s physical and financial responsibility for a product to the post-consumer stage of its lifecycle (e.g. the end of the product’s useful life when it becomes waste).[11]

The categories of products that would be subject to reporting requirements under the proposed federal registry include the following: 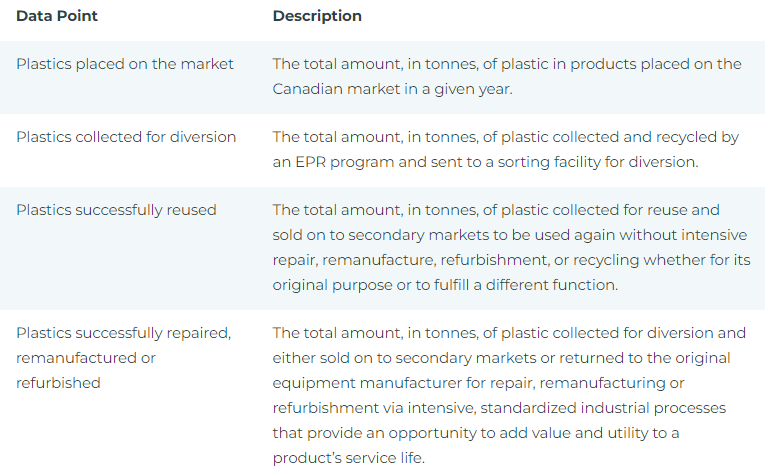 The reporting requirements under the federal registry would fall on the “obligated producer”, which is defined differently across the various Canadian jurisdictions under their respective stewardship legislation.[14] However, jurisdictions typically attempt to target the brand owner of the product, which itself has varying definitions, or alternatively the manufacturer, importer, distributor or retailer of the product into Canada.[15]

The government is also considering exempting small businesses from some or all of the obligations under the federal registry and permitting producers to submit data through approved agents like producer responsibility organizations.[16] Other considerations for the federal registry include exempting franchisees from having to report by requiring that franchisors submit a single report containing all information applicable for a franchise, requiring producers to validate their data using third-party professionals before submitting it to the registry, and requiring producers to pay a fee to help recoup the costs of managing the registry.[17]

The Canadian government is aiming for a phased implementation of the federal registry with Phase 1 slated to begin before the end of 2024.[18] Phase 1 would require producers already subject to EPR programs in provincial and territorial jurisdictions to report on the plastics they placed on the market for packaging and electronics. Reporting obligations for producers of the other categories of plastic products noted above will follow in Phases 2 to 4. Proposed timelines for these subsequent Phases have not yet been announced.[19]

Similar to the labelling rules for plastics, the Canadian government is seeking feedback on the proposed federal plastics registry from a range of stakeholders, including plastics manufacturers, brand owners, importers, distributors and retailers.

Planning Ahead for Businesses

These two federal consultations are strong indicators of Canada’s plans to continue reducing the amount of plastic waste generated within its borders through regulation. Businesses that manufacture, sell or import plastic products in Canada should remain alert to ongoing developments surrounding these two proposals as Canada moves towards zero plastic waste by 2030. We will continue to monitor these proposals and provide updates as this matter develops in our “Plan for the Ban” series.

In addition, companies potentially impacted by these proposals should consider making submissions to the federal government to ensure their voice is heard on these issues. We would be pleased to discuss any proposed submissions.