The Court of Appeal has ruled that even if an employee has previously affirmed the employer's repudiatory breach of contract, the right to resign and claim constructive dismissal because of that previous conduct is revived if there is another incident.

Where an employer commits a repudiatory breach of contract, the employee is entitled to resign and claim constructive dismissal. The breach may be a one-off event, or it may be a series of acts that individually are not repudiatory, but when taken together become so. The last act in a series is known as 'the last straw'.

In London Borough of Waltham Forest v Omilaju (2004), the Court of Appeal laid down guidance on what the last straw might look like. It must contribute something, even if relatively insignificant, to the breach, but:

An employee who wishes to resign in response to such a breach must do so promptly, because delay may mean that they have affirmed the contract and are no longer able to rely on the breach.

The Claimant was a nurse who claimed that the Respondent had looked for faults to push her out of employment. After an altercation with a colleague in April 2013, the Respondent began disciplinary proceedings against her and she was given a final written warning in October 2013. Her appeal against that warning was dismissed in July 2014, and she resigned the next day.

She brought a claim of constructive unfair dismissal against the Respondent, relying on a series of events beginning with unjustified complaints about her performance, the incident with her colleague, and the conduct of the disciplinary and appeal hearings.

The claim was struck out by the Employment Tribunal at a preliminary hearing. The employment judge found that the Claimant had no realistic prospect of success in establishing at a full hearing that the conduct and decision of the appeal hearing was either a fundamental breach of contract or the last straw, capable of contributing to a cumulative series of conduct. He also held that the altercation itself could not be the last straw, as it had happened in April 2013 and she had remained in employment for over a year and had no reasonable prospect of showing she had not affirmed or waived any possible breach arising. In Vairea v Reed Business Information Ltd (2017), the EAT had held that once a contract has been affirmed, a previous breach cannot be revived and relied upon in a claim for constructive dismissal.

The EAT dismissed the Claimant's appeal and the Claimant appealed to the Court of Appeal, arguing that the employment judge had erred in his application of the law on constructive dismissal (and the last straw principle), and that he should not have concluded she had no reasonable prospect of success.

The Court of Appeal (Underhill LJ and Singh LJ) dismissed the Claimant's appeal.

The guidelines in Omilaju are still good law. Vairea, however, was not. Where there has been conduct which breached the implied term of trust and confidence but the employee affirmed the contract, if the conduct was continued by a further act (the last straw), the employee could revive their right to terminate based on the totality of the employer's conduct.

If a tribunal considered the employer's conduct in its entirety to have been repudiatory, and the final act was part of that conduct, then whether or not it had breached the implied term of trust and confidence at an earlier stage was irrelevant. Even if it had, and even if the employee had affirmed the contract then, the final act revived the employee's right to resign in reliance upon it.

An Employment Tribunal asked to decide if an employee has been constructively dismissed should ask itself the following questions: 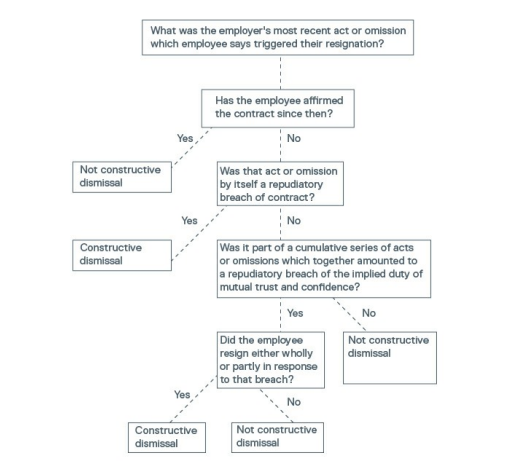 The Court of Appeal held that the employment judge had been correct to hold that there was no reasonable prospect of the Claimant showing that the Respondent's handling of the disciplinary and appeal processes could form the last straw in a cumulative series of breaches.

Furthermore, the employment judge had been entitled to conclude that the Claimant had no reasonable prospect of success. The Trust had acted reasonably in taking disciplinary action, and issuing a final written warning at the end of that process. While the Claimant might believe the outcome to be wrong, a fair and properly followed disciplinary process could not destroy or seriously damage the employment relationship when viewed objectively.

What to take away

The case confirms the existing 'last straw' principles, and sets out five useful questions for tribunals.

Employers should be aware that it is possible to revive a previously affirmed breach, and for an employee to then resign claiming constructive dismissal if there is a new event.

Terminology point (especially for the lawyers, and those who have to understand them)

When drafting or defending claims, it may become more common to see certain phrases being used which were suggested by the Court of Appeal in this case.

In particular, the implied term of trust and confidence was referred to as "the Malik term" (from the case of Malik v Bank of Credit and Commercial International (1997)), and "conduct that crosses the Malik threshold" to describe a series of events or omissions, which individually may not be repudiatory entitling the employee to resign, but may when taken together.