According to recent press articles, a number of overseas subsidiaries of Chinese state-owned enterprises (SoEs) have started to inform their Chinese expatriates assigned from mainland China to declare their overseas income with the Chinese tax authorities and settle any outstanding China Individual Income Tax (IIT) for the year 2019 by 10 July 2020.

In the past, Chinese employees assigned to work overseas were generally viewed as being off the radar in terms of China IIT. Although the China IIT Law and its implementation rules have for many years provided that Chinese expatriates working overseas are still considered Chinese tax residents and subject to China IIT on their worldwide income, these rules were rarely enforced and many Chinese expatriates were not aware of their obligations to file home tax returns. Expatriates declare their salary income and pay overseas income tax in the host country/region, but not many report their overseas income in the home county and settle China IIT accordingly.

With the recent IIT reform in 2019, and the introduction of a number of implementation rules (particularly the tax policy on overseas income1), it appears the China tax authorities are taking a harder stance on how overseas income derived by China tax residents will be taxed in China, starting with Chinese expatriates working for SoEs.

We anticipate the change in approach may also have implications for how cross-border employment assignments are structured going forwards.

China imposes IIT withholding obligations on employers and payers of relevant compensation as a general rule under the China IIT Law.

The Belt and Road Initiative and relevant polices has fostered increased outbound investment by Chinese companies especially SoEs, which has also led to an increase in the number of Outbound Assignees working in different countries and regions. Depending on the remuneration arrangement of the Outbound Assignees, Notice 3 stipulates three main compliance obligations of domestic dispatching entities in respect of the Outbound Assignees, including tax withholding, tax reporting and Chinese expatriates information reporting which are summarized in the table below. 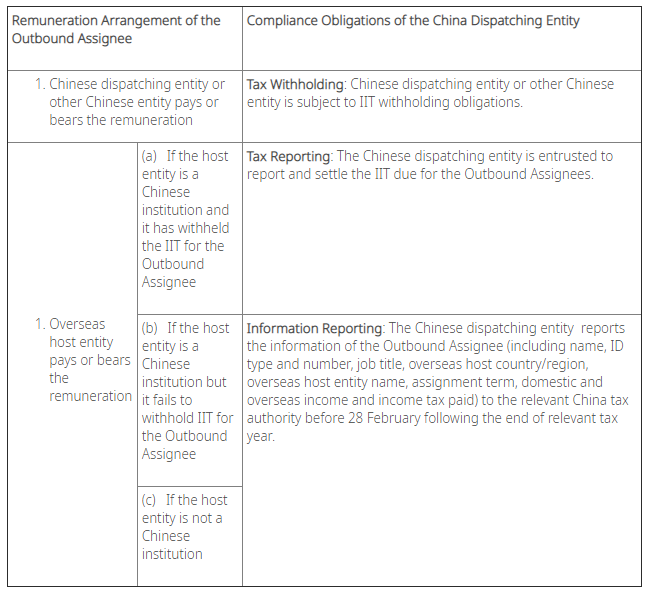 The Chinese institutions referred to in the table above include overseas branches, subsidiaries, embassies (consulates), and representative offices of enterprises, public institutions, other economic organizations and state organs in China.

The penalties are for non-compliance are potentially significant. The Chinese dispatching entity or the overseas host entity may face a penalty of up to 3 times the underpaid IIT if it fails to withhold or report IIT in accordance with Notice 3.

For the income tax paid in the overseas host country or region, Outbound Assignees are entitled to foreign tax credit based on the Notice 3 and relevant tax treaties when they file home country tax returns. Notice 3 provides detailed guidelines for claiming foreign tax credit by Outbound Assignees to avoid double taxation. This can be a tedious process as it requires the Outbound Assignee to collect all information required to calculate China IIT based on China domestic tax laws and regulations and the creditable amount of foreign tax paid in the host jurisdiction, the compilation of required supporting documents for tax calculation and credit, and transferring funds to China for tax settlement (if required).

As a general rule, for Outbound Assignees assigned to work in jurisdictions that have lower income tax rates than China, they would have to make up for the difference in China. If the tax paid in the host jurisdiction is higher than the tax calculated based on the Chinese tax laws, the excessive tax paid can be carried forward to offset any tax payable in the next 5 years.

Managing tax risk has always been an issue for employees assigned to work overseas and in multiple jurisdictions. Depending on the tax regimes of the applicable jurisdiction, they may be subject to tax in both the home and host country, or any other countries in which they perform a significant amount of services from time to time.

The amount of time spent by the assignee, the job function, proportion of pay and cost borne by the entity in each jurisdiction are some of the factors relevant when considering how to structure and document the employment relationship of the assignee. In the past, some companies adopt a split payroll arrangement documented either through an assignment letter or ‘dual’ (or multiple) employment contracts2. The intention of these companies is to have the individual’s remuneration for providing service be taxed according to and to the extent that remuneration is earned in the country in question. For example, if 50% of an employee’s working time is spent in Country A and 50% in Country B, then strictly speaking in general the approach has been that 50% will be taxed under the tax laws of Country A and 50% will be taxed under the tax of Country B. If the tax rate is significantly higher in one country compared to the other, it may generate a significant tax saving for the employee if the remuneration and service level in the first-mentioned country can be reasonable reduced. In terms of documentation, both assignment letter and dual employment contracts may allow the employer and the employee room for tax planning and to accrue rights in multiple jurisdictions. They require careful drafting and they can be complex to administer.

The renewed focus on enforcement of China IIT overseas as discussed above means that Chinese expatriates may no longer be able to avoid or reduce paying China IIT by splitting out the payroll to another location. As noted above, by law, Chinese expatriates working overseas are still considered domiciled in China for tax purposes and subject to China IIT on their worldwide income, and Notice 3 means the China dispatching entity is subject to certain reporting obligations in relation to the information of Chinese expatriate holding offshore positions and receiving offshore income. If the intention to split the payroll and contract involves tax, the recent enforcement against Chinese employees of SoEs may give rise to concerns as to whether the arrangement is still attractive as the offshore income would still be subject to China IIT. Chinese Outbound Assignees may require their employer to bear the relevant China IIT cost, and they will be forced to consider other alternatives.

Notwithstanding the above, to date, enforcement of overseas tax collection on Chinese Outbound Assignees is limited to subsidiaries and branches of SoEs in practice, rather than non-SoE Chinese companies or foreign multinational companies. Also, companies facing such requirements should consider the scope of the word “Outbound Assignee”, what kind of Chinese employee overseas will attract withholding and reporting requirements for the company, and whether there exists situations where certain Outbound Assignees are considered non-China tax residents. There may also be data privacy issues associated with the transfer of employee data across borders to the parent or home entity.

Notice 3 aims to improve the tax declaration and foreign tax credit system in relation to overseas income of China tax residents and to further strengthen the tax collection and management involving a mobile workforce. The increased compliance burden brought by Notice 3 is likely to make cross-border assignments less attractive to both the employer (including the China dispatching entity and the overseas host entity) and employees alike.

The change is likely to complicate employee mobility issues for companies with Chinese expatriates, especially if the Chinese government broadens the enforcement to non-SoE companies. Compensation structuring and arrangement, as well as employee risk assessment are based on a number of factors including employment and labor laws, immigration rules, exchange controls, transfer pricing, tax burden and administration costs. Companies with Chinese expatriates are recommended to assess the following to determine if changes need to be made to their existing remuneration arrangements:

Employers should also identify the employment arrangements of any Chinese expatriates and conduct a risk assessment as to the likelihood of challenge by the Chinese tax authorities.