The reform package will strengthen Switzerland’s position as an attractive international business location and is expected to enter into force on 1 January 2020. Aside from favorable step-up mechanisms, TP 17 will introduce a notional interest deduction on equity financing for companies in the canton of Zurich. Any company which currently benefits from a preferential tax status such as the holding company, mixed company or finance branch status is now required to swiftly analyze its transition into the new tax system.

TP 17 replaces current tax regimes such as holding, principal, mixed company and finance branch regimes with new tax measures in line with international standards. As Switzerland is not tied back by the principles of the European Union, it provides more flexibility for R&D related activities, for instance by allowing outsourcing to related parties and third parties. Separately, many cantons announced significant tax rate reductions resulting in effective corporate tax rates in Switzerland of 12 to 14% in most cantons, thus effectively spearheading Europe as a business location. The final bill essentially mirrors prior drafts and does not contain any significant surprises: 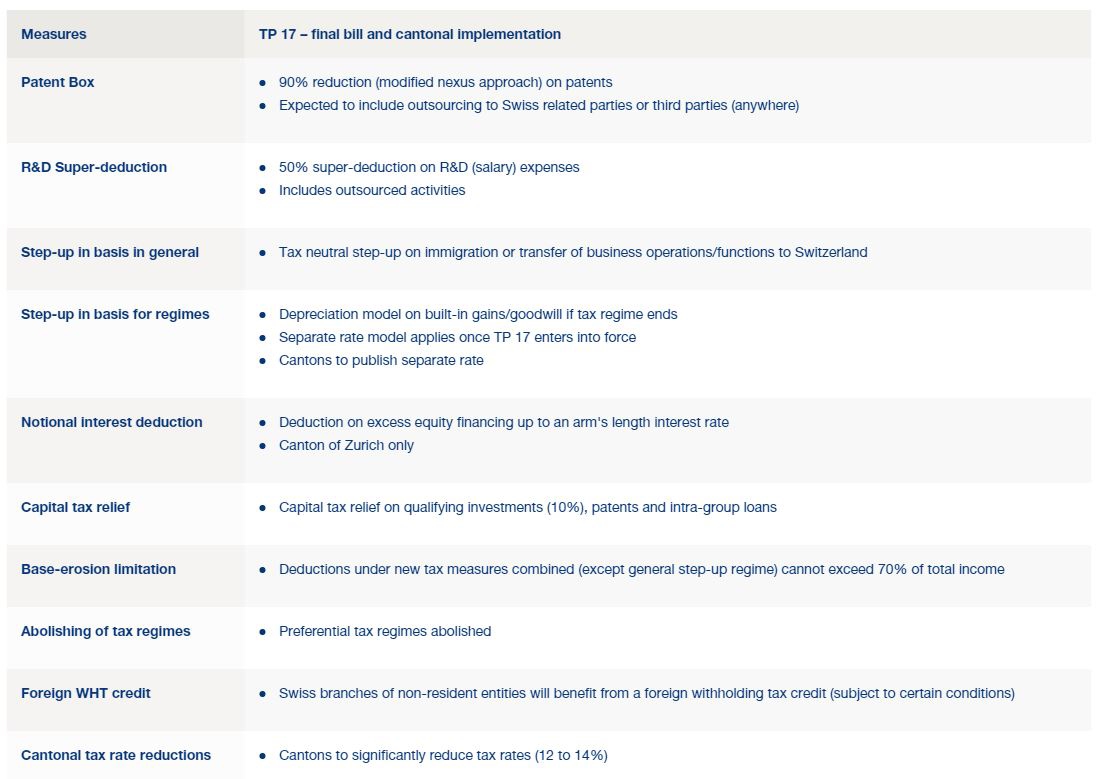 In order to sweeten the deal, minor changes will be made, notably, to the preferential taxation of dividends for individuals (minimum tax basis of 70% on federal and 50% on cantonal level) and to the income and withholding tax treatment of qualifying capital reserves (additional paid-in capital). The latter changes only pertain to Swiss listed companies and due to broad exemptions essentially do not impact other multinationals.

The final bill, in essence, closely follows the Swiss corporate tax reform III package which was rejected in a vote back in February 2017. A public referendum vote is expected for TP 17 in May 2019. Swiss businesses have one year to restructure and implement potential step-up mechanisms. Overall, the new corporate tax landscape will secure Switzerland's place ahead in the European landscape.

TP 17 is expected to enter into force on 1 January 2020. Swiss businesses will have to evaluate which step-up mechanisms to apply as the results can be significantly different. Automated modelling tools and transfer pricing work will proof key in the new tax environment as most new measures cannot be implemented properly without a throughout transfer pricing check-up.

At the same time as TP 17, EU member states are implementing ATAD I and the multilateral instrument, which requires a step back to fully appreciate the big picture:

We recommend clients to consider all elements of TP 17 and start the implementation process by focusing on the above topics for their Swiss operations.